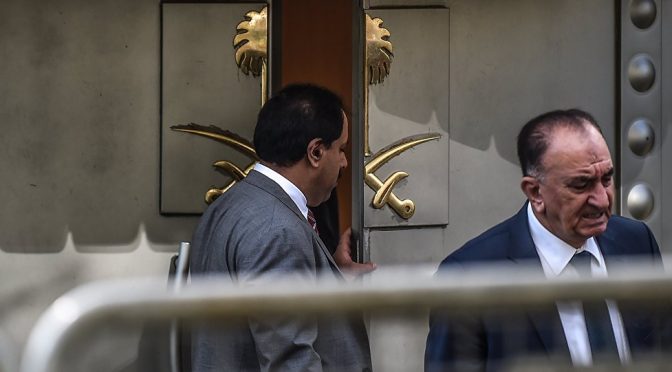 Until a few weeks ago, all eyes were set on Israel’s post-mortem diplomacy with Russia in the aftermath of its sneak attack on Syria, which resulted in the untimely deaths of 15 Russian personnel onboard a surveillance aircraft. Now, it is Saudi Arabia’s turn to formulate a good public relations plan to mitigate the effects of the Khashoggi murder fiasco.

Jamal Ahmad Khashoggi (Arabic: جمال خاشقجي‎ Jamāl Khāshuqjī, Hejazi: [ʒaˈmaːl χaːˈʃoɡʒi], born 1958[2]– disappeared 2 October 2018) was a Saudi journalist,[3] author, and the former general manager and editor-in-chief of Al-Arab News Channel.[4] He also was editor for Saudi newspaper Al Watan, turning it into a platform for Saudi progressives.[5]
Khashoggi fled Saudi Arabia in September 2017. He said that the Saudi government had banned him from Twitter[6] and later wrote newspaper articles critical of the government. Khashoggi has been sharply critical of Saudi Arabia’s crown prince, Mohammad bin Salman, and the country’s king, Salman of Saudi Arabia.[3] He also opposed the Saudi Arabian-led intervention in Yemen.[7]
Khashoggi disappeared on 2 October 2018 and was last seen entering the Saudi consulate in Istanbul, Turkey, by its main entrance.[8] Anonymous Turkish police sources have alleged that he was murdered and dismembered inside the consulate.[9][10] The Saudi government claims that Khashoggi left the consulate alive, through a rear entrance,[11] but Turkish police say that no CCTV recorded him exiting the consulate.[12] On 15 October, an inspection of the consulate, by both Turkish and Saudi officials, took place. His death has not been confirmed.
https://en.wikipedia.org/wiki/Jamal_Khashoggi

Khashoggi’s family is allied to the founder of Saudi Arabia, Abdulaziz Al Saud, and was a nephew to Adnan Khashoggi, a known CIA asset in arms smuggling – the same orbit where Osama bin Laden grew up and died.
Khashoggi was also the cousin to Dodi Fayed, who died with Princess Diana in an MI6 car crash in 1997.
Now, those are not the only interesting facts on the case. Recently, Donald Trump is distinctively blaming “rogue killers” as behind the Khashoggi murder, and take this, he is not expected to risk any economic war with the Saudis over the case.

Washington has threatened consequences if a Saudi link is proven, but isn’t willing to risk the consequences, some observers say. 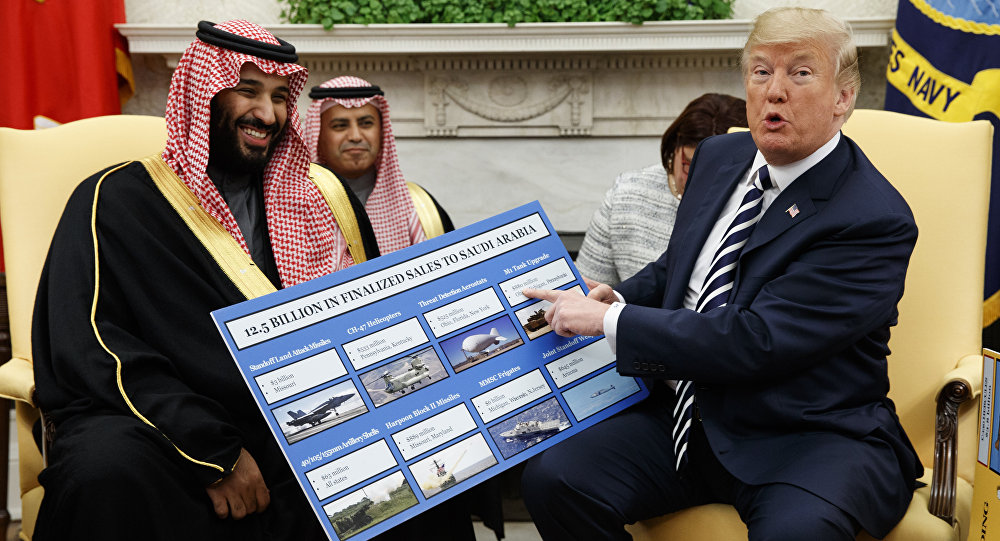 … Mojtaba Jalalzadeh, an Iranian US watcher and international relations expert at the Islamic Azad University in Tehran, suggested that it was pretty obvious how Washington’s bluster over the Khashoggi case would end.
“Even before his election, Donald Trump promised Americans a prosperous economy and a reduction of unemployment. We remember that the first country that Trump visited as president was Saudi Arabia. At that time, the Saudis signed a very ‘generous’ contract with the United States in the amount of $400 billion, including $110 billion which they would have to pay in the first phase,” Jalalzadeh recalled.
Therefore, the analyst suggested that notwithstanding pressures from the Democrats and some Republican lawmakers, economic sanctions against Riyadh are unlikely, even if it is conclusively documented that Saudi authorities did murder Khashoggi.
https://sputniknews.com/analysis/201810151068910770-trump-saudis-khashoggi/

What this means is that, while the intelligence section of the Deep State is twisting the arm of the Salman clan inside the House of Saud through a high profile murder done at the Saudi consulate in Turkey, the White House is also not hiding its intention to milk the latter for more of that petrodollar. The combination is called in ordinary times as extortion by way of a blackmail.
It’s not a coincidence that the Kashoggi murder inside a Saudi consulate happened at about the same time as the Bloomberg’s interview with Crown Prince Salman where he said:

Actually we will pay nothing for our security. We believe that all the armaments we have from the Untied States of America are paid for, it’s not free armament. So ever since the relationship started between Saudi Arabia and the United States of America, we’ve bought everything with money.
Before two years ago, we had a strategy to shift most of our armament to other countries, but when President Trump became president, we’ve changed our armament strategy again for the next 10 years to put more than 60 percent with the United States of America.
That’s why we’ve created the $400 billion in opportunities, armaments and investment opportunities, and other trade opportunities. So this is a good achievement for President Trump, for Saudi Arabia.
Also included in these agreements are that part of these armaments will be manufactured in Saudi Arabia, so it will create jobs in America and Saudi Arabia, good trade, good benefits for both countries and also good economic growth. Plus, it will help our security.

Saudi Arabia is one of those countries which are keeping the Deep State afloat, and this event will keep it that way. After all, no less than Trump himself has been complaining about Saudi Arabia “not paying enough for its security.”

“We protect Saudi Arabia. Would you say they’re rich? And I love the King, King Salman. But I said ‘King — we’re protecting you — you might not be there for two weeks without us — you have to pay for your military,” Trump said.

Saudis preparing to admit Khashoggi was killed
The Saudis are preparing a report that will conclude Jamal Khashoggi’s death was the result of an interrogation that went wrong, one that was intended to lead to his abduction from Turkey, according to two sources. Source: CNN

So, the Game of Thrones in the House of Saud and in general, across the entire Middle East, will continue to be played along the script prepared for them by the Deep State. This should cover those who will rise and fall in the service of the men behind the Vatican-led Corporatocracy.

Because, it's a Deep State high profile extortion against the House of Saud, not that the latter is benevolent altogether, but mutual interest being served. https://t.co/JXYBjZJ1jv

12 thoughts on “It’s Saudi Arabia’s Turn to Feel the Heat, Here's why”