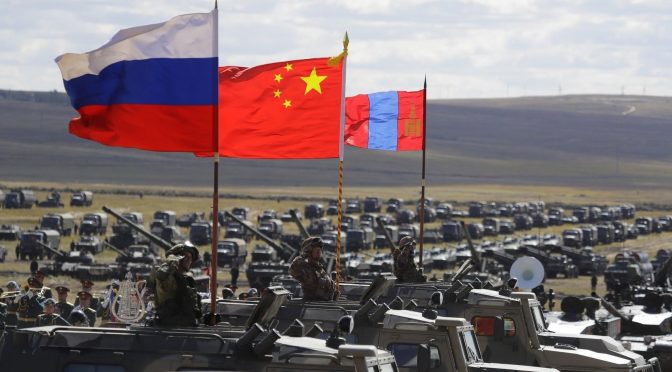 Barely reported by the Western media, Russia has launched a series of war games in Europe and the Far East together with several of its allies.  These war games are largely in response to NATO’s military buildup on Russia’s Western frontier, in Eastern Europe, The Baltic States and Scandinavia.
They also coincide with Donald Trump’s decision to repeal the 1987 INF agreement signed between Ronald Reagan and Mikhail Gorbachev. The Intermediate Nuclear Force Treaty (INF), “aimed to eliminate short and medium range nuclear missiles.”
We are at a dangerous crossroads in our history. The broader public must be informed, particularly in NATO countries. It is crucial to restore sanity in international diplomacy to prevent the unthinkable.
Examine the overlapping chronology of these war games. (September-December 2018).
The structure of military alliances has shifted. Russia and China have harnessed the support of two of Washington’s (former?) allies, namely India and Pakistan, both of which are now full members of the Shanghai Cooperation Organization (SCO).
October 25, 2018. NATO War Games. Largest since Cold War
NATO war games under Operation Trident Juncture commence on October 25, 2018. Trident Juncture 2018 is NATO’s largest exercise since the Cold War.
Around 50.000 troops, 250 aircrafts, aircraft carrier Harry S. Truman, 64 vessels and 10,000 vehicles will participate to Nato’s collective defence scenario (Article 5) from 25 October to 7 November 2018.
All Nato’s members as well as NATO partners Finland and Sweden will participate. (See Global Research, October 21, 2018)
***
September 13, 2018. Russia-China-Mongolia War Games in Eastern Siberia. Russia’s Largest War Games Ever
Russia, China and Mongolia undertook The Vostok-2018 drills in eastern Siberia close to China’s border. The exercise was on on massive scale involving 300,000 Russian forces. “The exercises, … involve more than 1,000 military aircrafts as well as up to 36,000 tanks, … China sent about 3,200 troops, 900 combat vehicles, and 30 aircrafts to join the drills” Al Jazeera, September 13, 2018) 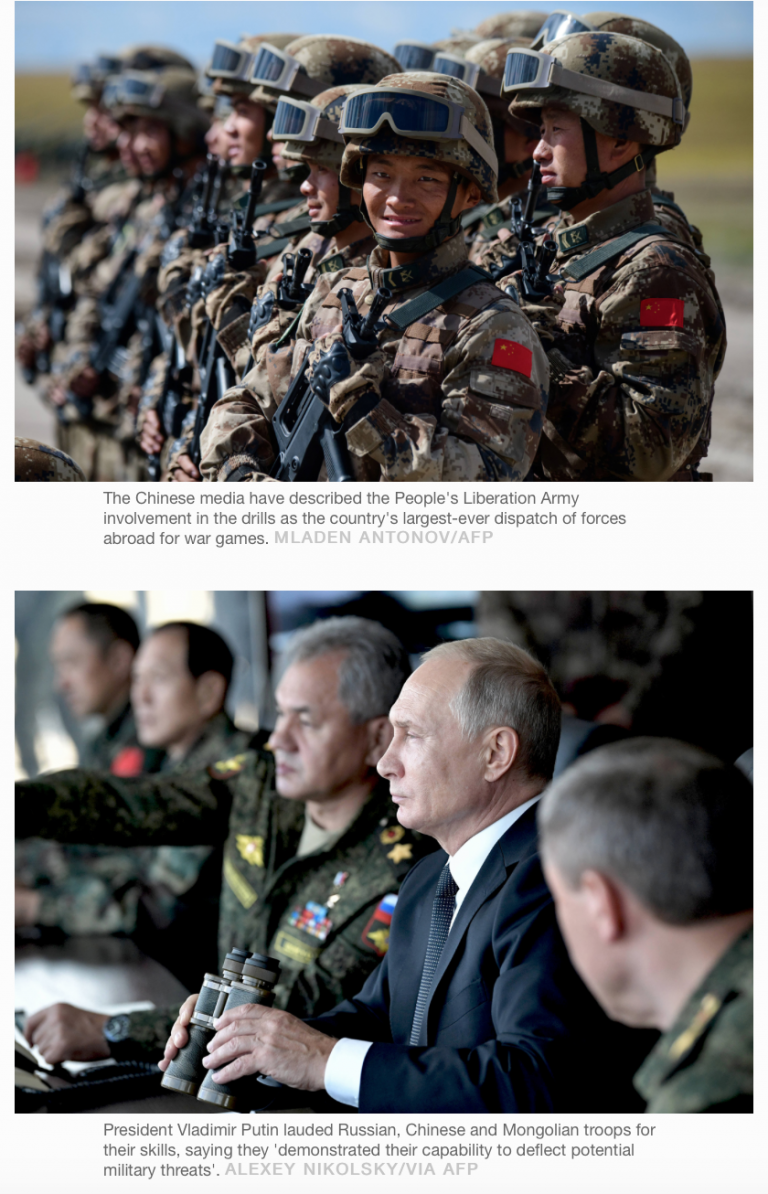 September 30, 2018. Russia-Serbia Air Drills
Together with Serbia, Russia launches air drill: “Pilots of Russia’s Aerospace Defence Forces and the Serbian Air Force and Air Defence will conduct a joint tactical flight exercise BARS-2018 on the territory of the Republic of Serbia.”
The drills will see the militaries from both countries practice intercepting aerial targets, air-to-air engagements and mid-air manoeuvres.
Aircraft will also carry out tactical strikes on ground targets and a search-and-rescue mission.
According to the Russian military, some of its most state-of-the-art planes and choppers will be used, including MiG-29 twin-engine jet fighter aircraft and Mi-8 medium twin-turbine helicopters.
The drills come as Russia revealed it had created one of the world’s most advanced missiles to date.
The Kremlin has boasted about its R-37M missile, which will turn the country’s air force into one of the world’s most fearsome and has a greater range than any belonging to the US military. (Daily Star, UK, September 30, 2018)
October 20, 2018: Russia-India Military Exercises Involving Land Forces, Navy and Air Force
India and Russia initiated a 10-days military exercises involving land forces, navy and air force. The war games were launched in the eastern military district of Russia. The timing of these war games coincides with the onslaught of those conducted by NATO in Scandinavia and the Baltic States.
In the midst of evolving security situation in the region, India and Russia will hold a mega war game in October involving their armies, navies and the air forces for the first time to further ramp up military ties.
The exercise Indra, which will be held in Russia from October 19 to 29, will primarily focus on achieving coordination between forces of the two countries in a tri- services integrated theatre command scenario, military sources said.
Of significance, the Russia-India war games are also marked by the establishment of joint command and control structures between the two countries.
What is at stake is a geopolitical realignment. We are no longer dealing with a bilateral military cooperation agreement. India has not only entered Russia’s military orbit, it is now a full  member together with Pakistan of the Shanghai Cooperation Organization (SCO).
In recent developments, the SCO is evolving towards a de facto collective security arrangement with Russia and China playing a central  role.
In turn, India is slated to acquire Russia’s S400 state of the art air defense system.
December 2018: India-China Joint Military Exercise
It is worth noting that India and China have also reasserted their intent to build upon a military cooperation within the framework of the SCO:
“India and China have agreed to resume the joint military exercise, Hand-in-Hand, which was suspended after the Doklam face-off. In sync with the renewed efforts by both countries to reset ties, the military exercise will take place in the second week of December in Kunming, China.”
October 22, 2018: Russia-Pakistan Joint Military Training
Coinciding with the Russia-India war games (which started on October 20), Russia is also involved in a joint training exercise with Pakistan which started on Monday October 22.
Russian Army Contingent arrived in Pakistan to participate in Pak-Russia Joint Training Excercise ‘Druzhba-III’. This is 3rd exercise as part of Pak-Russia bilateral training cooperation. The 1st Exercise was held in Pakistan during 2016 while 2nd in Russia during 2017. pic.twitter.com/Qbu8zx7tQl
What this ultimately suggests is that neither Pakistan nor India are no longer Washington’s trusted allies.
But also, the conflict between India and Pakistan, which dates back to the British empire, is in the process of being resolved under the auspices of the SCO.

Russia and NATO show war games aren’t just games
by James Stavridis | September 24, 2018
Over the coming weeks, both NATO and Russia will launch a series of super-high-end war games. These games are hardly for fun — rather, they are deadly serious practice sessions for hundreds of thousands of soldiers, thousands of combat aircraft, and flotillas of combat ships.
While no one will die (other than by accident, a not uncommon occurrence in such exercises), the messages going back and forth are crystal clear: We are prepared for war.
Russia’s exercise is called Vostok — which means “east” — and will be held principally east of the Ural Mountains. It is the largest military exercise by Russia since Soviet times (in 1981) and will deploy 300,000 troops and more than 1,000 military aircraft. Of note, China will participate with thousands of its troops operating alongside the Russians.
The message to the West is obvious: Russia and China might work together militarily against NATO in the East or the U.S. and its allies in the Pacific.
The futuristic novel “Ghost Fleet” by Peter Singer and August Cole gives an excellent description of a high-tech war that begins unexpectedly in the Pacific with Russia and China allied against the U.S. These war games provide a preview of what sort of military activity could look like — and it should be very worrisome to U.S. planners.
NATO will conduct its own huge military exercise, named Trident Juncture 2018. It will take place on the northern borders of the alliance and will involve 40,000 troops from all 29 nations, a couple of hundred aircraft and dozens of warships.
While not as spectacularly large as Russia’s Vostok, it will serve as a “graduation exercise” for NATO’s new Spearhead Force, a serious, highly mobile capability that can put NATO combat troops into the Baltic states to repulse a Russian invasion within a matter of days.


And the pawns in the game are more than willing to showcase their skills for the glory of the mighty corporations behind the death and destruction enterprise.

3 thoughts on “Russian and Allied War Games Intensify vs. US-NATO Military Buildup on its Borders”