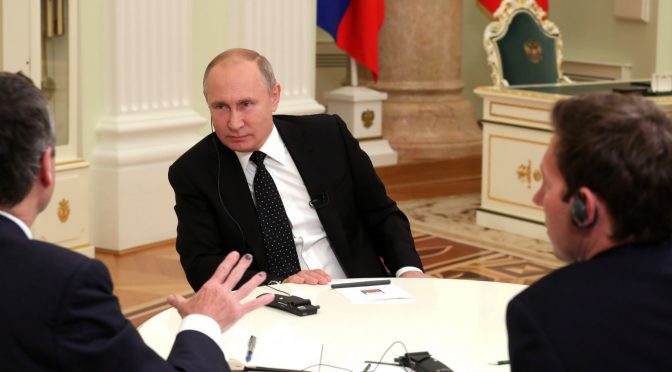 The Russian leader had some very candid comments about the state of Western democracies, bound as they are by the liberal idea, which Putin says has “outlived its purpose.”

Last week, on the eve of the G20 summit in Japan, Vladimir Putin sat down for a lengthy interview in the Kremlin with the Financial Times. Of the many issues touched upon, it was the frank discussion on liberalism that struck the loudest chord in the Western capitals.

In the course of making his case that the purpose of government is to build a “stable, normal, safe and predictable life for the people and to work towards a better future,” Putin compared that goal with liberalism in the West, which he argued “has outlived its purpose.”

Putin pointed to the disastrous immigration policy, spearheaded by German Chancellor Angela Merkel, of permitting untold numbers of undocumented peoples to flood the European continent. How many of those numbers will turn out to be future terrorists is anybody’s guess.

“When the migration problem came to a head, many people admitted that the policy of multiculturalism is not effective and that the interests of the core population should be considered,” the Russian leader said.

Putin went on to say that although many people in foreign countries “need our assistance,” he asked why Western leaders had failed to consider “the interests of their own population” when the number of migrants ascending upon Western Europe is “not just a handful of people but thousands or hundreds of thousands?”

Needless to say, the response to that remark in the Western capitals, where even questioning the idea of open borders is practically akin to racism, came fast and furious.

Donald Tusk, the former prime minister of Poland who now serves as European council president – a position, incidentally, that he was not elected to by democratic consent, but appointed to by the European Council – disagreed with Putin’s assertion that ‘Liberalism is obsolete.’

Although Putin never said as much, he may agree that, in light of the unilateral decision to allow illegal immigrants to enter the European Union the rule of law and human rights are also on the verge of obsolescence. Although many shout about the ‘rights’ of the immigrants, few in the West talk about the needs of the local population who is already being victimized by the influx. Nor was there any sort of democratic consensus before Europe’s border was opened and hundreds of thousands of freeloading foreigners took advantage of Europe’s generous welfare system. Of the countries that did take a stand against this so-called ‘plan’, most notably Hungary and Poland, they are in the process of being punished today by Brussels for their “intransigence.” Yet their real crime was actually saving the EU from further internal chaos and disintegration.

When asked whether Angela Merkel had committed a mistake by agreeing to open Europe’s borders to the unimpeded flow of immigrants, the Russian leader’s answer was unmistakably clear.

“A cardinal mistake,” he said.

At this point, the question must be asked as to why Merkel and other European heads of state, like French President Immanuel Macron, permitted this invasion in the first place, especially when it clearly goes against national interests. What influenced his decision-making process? Was it something that the Western leaders committed to at the annual Bilderberg meetings, which are always held behind closed doors? Or perhaps it was the financier George Soros, who has made no secret of his efforts to attract undocumented immigrants to European shores? Indeed, his Open Society European Policy Institute met with members of the European Commission literally hundreds of times over the course of the last decade. The non-profit group, which just got a massive $18 billion boost from Soros himself, has even drafted a list of over 200 “reliable allies” in the EU parliament that share the financier’s warped worldview. Was this what motivated Brussels to lower its moat in the face of an actual invasion?

The fact that such uncomfortable questions must be considered speaks volumes about the condition of Western democracy, which no longer responds to the will of the people, but rather the will of those with the most funds to spend. Given a choice in the matter polls show that Europeans would have roundly rejected the ‘Merkel plan.’

The very same could be said about the debate over LGBT rights. Although nobody would think of denying anyone the right to live according to their desires, the nation has a responsibility, Putin argued, to protect children from the message.

“I am not trying to insult anyone, because we have been condemned for our alleged homophobia as it is,” he began. “But we have no problems with LGBT persons. God forbid, let them live as they wish. But some things do appear excessive to us.

“They claim now that children can play five or six gender roles. I cannot even say exactly what genders these are, I have no notion. Let everyone be happy, we have no problem with that. But this must not be allowed to overshadow the culture, traditions and traditional family values of millions of people making up the core population.”

I would argue that the overwhelming majority of Western citizens would agree with the Russian leader. After all, what we are talking about here is the rights of everyone, not just those who subscribe to a LGBT lifestyle, who, it must be added, are still in the minority. And the so-called ‘anti-gay’ law that so many people wrongly ascribe to Russia is nothing more than legislation that protects children from being exposed to a mature subject before they are old enough to process the information. The rights of children, who are not physically or intellectually prepared to discuss, let alone understand, such topics, must be respected as well.

Unfortunately, that is not the position being taken in many Western capitals, where in some cases children as young as five years old are being taught about ‘alternative lifestyles.’ And as I’ve discussed in a previous column, the US medical community is under strict instruction to no longer suggest psychological counseling for children who ‘identify’ with the opposite sex. Rather, the children will be placed on the fast track to sexual ‘reassignment surgery,’ a process that is loaded with incredible pitfalls.

Surprisingly, many Westerners share a lot in common with Russia, not to mention the Russian leader. Unfortunately, however, the mainstream media rarely represents Putin’s views in an impartial light, which should come as no surprise. The Western world appears to have an agenda, a hyper-liberal agenda loaded with dangerous cultural experiments, even on the young, that the majority of people do not want. Western politicians have other masters they must please far beyond that of the electorate.

The ultimate objective is to divide and conquer the population with conflicting views that preoccupy them throughout their damned lives, while the social engineers and their employers insatiably savor the bounty that the Earth provides them.