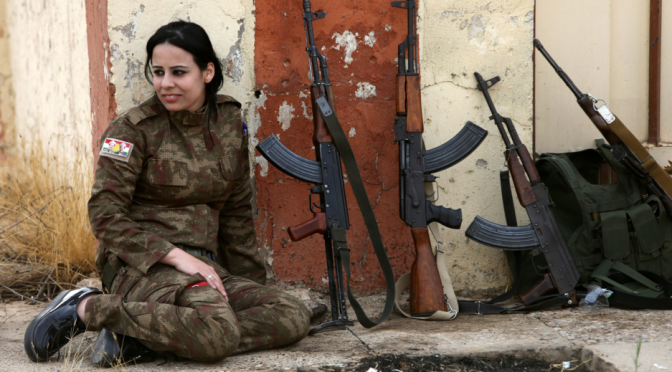 It is a maxim of US statecraft that Washington “does not have permanent friends or enemies, only interests.” That maxim, attributed to Henry Kissinger, was starkly demonstrated this week when US President Donald Trump gave Turkey a green light to launch a military offensive on northern Syria, targeting Kurdish militants.

The Turkish offensive began on Wednesday with air and ground attacks against Kurdish positions in northeast Syria. It is not clear yet how far Turkey’s operation will proceed, but already there are reports of civilian deaths and thousands of people fleeing from artillery and air strikes, and possibly a major ground invasion by Turk forces into Syria.

The Syrian government has condemned the military assault as “aggression”. Iran has likewise condemned. Russia cautioned Turkey to respect Syria’s sovereignty and territorial integrity. European states also censured the Turkish incursion, requesting an emergency meeting of the UN Security Council. Russia vetoed a European-led resolution because it was not, in Moscow’s view, wide enough to cover all illegal foreign military presence in Syria.

President Trump called the Turk operation, named with Orwellian duplicity Operation Peace Spring, a “bad idea”. How ludicrous and cynical of Trump. Only days before in a phone call with Turkey’s President Recep Tayyip Erdogan he assented to remove US troops and a security guarantee for Kurdish militants, whom Washington has been using as an “allied” proxy force in Syria’s war.

Trump came in for much bipartisan and media flak in Washington for “betraying our Kurdish allies”. But as the maxim goes, American imperialism doesn’t have allies, only “interests”. The Kurds found out this week in the most cruel and callous way that they are merely “interests” for Washington, to be discarded like pawns off a chessboard.

The cynicism in Washington is astounding. The ethnic Kurdish people straddling Turkey, Syria, Iraq and Iran have time and again been exploited by US imperialism over many decades to act as proxies for American interests, only to be abandoned when their perceived usefulness expires.

The cynicism of Turkey’s Erdogan also knows no bounds. He declared that the offensive on Syria was an anti-terror operation, to, “bring peace and security to the region… We will protect the territorial integrity of Syria and save the region’s people from the claws of terror.”

This is brazen double-think by the Americans and fellow NATO member Turkey.

Washington couldn’t care less about the Kurds, whom it has weaponized and trained for the alleged purpose of “fighting terrorism” in Syria. The reality is the Americans have mobilized the Kurds to act as proxies to carve up Syrian territory with a disingenuous promise to provide them with regional autonomy. The real objective for Washington was always to exploit Kurdish separatist aspirations in order to dismember Syria for its bigger scheme of achieving regime change in Damascus. That scheme failed, thanks in part to Russia’s military intervention from the end of 2015 to defend Syria.

Now the Kurds have been left out to hang and die by Washington because of some whim by President Trump. Having unleashed Turkey’s escalation of violence against Syria, Trump is obviously flailing around seemingly to mitigate the onslaught, threatening to impose economic sanctions on Ankara to wreck its economy. It’s a comedy of errors, which is decidedly unfunny given the humanitarian consequence from Trump’s ham-fisted dumping of the Kurds.

So, what can be done to de-escalate the violence? First, Turkey must respect its stated commitment to the Astana process, along with Russia and Iran, in which it vows to respect Syria’s sovereignty and territorial integrity. There is no excuse for launching military strikes on Syria, regardless of claims about “ridding a terror corridor”.

Secondly, as Syria, Russia and Iran have repeatedly stated, all foreign troops unlawfully present in Syria must get out of the country immediately in compliance with international law. American, British, French and Turkish troops, special forces and warplanes have for too long violated Syria with egregious violation of international law. Those NATO states are culpable of war crimes and aggression. European denunciations of Turkey this week are hypocritical nonsense.

The harsh truth is that Kurdish leaders have allowed their people to become pawns in criminal intrigues by NATO powers against the nation of Syria. One would think, surely, the Kurds must have learnt lessons from multiple past betrayals by Washington. They find themselves in a pitiless situation – again – because they foolishly subjugated their interests to those of Washington.

Kurdish militants – who paradoxically have fought effectively against Washington’s other proxies, various jihadist terror groups – have only one choice. They must somehow reconcile with their Syrian Arab brothers and the Syrian Arab Army to defend their common nation of Syria. That means a repudiation of America’s imperialist dirty games.

Russia, with its principled record of intervention to end the war in Syria, might play a role in facilitating a new alliance between the Syrian government forces and the Kurdish militia. In a new constitution being negotiated by Syrians perhaps the Kurds can be afforded eventually a degree of regional autonomy. But first they have to earn that right by defending the nation and freeing themselves from the nefarious imperialist scheming by Washington and other NATO powers, which is intent on destroying Syria.

7 thoughts on “US Betrays Kurds – Again”