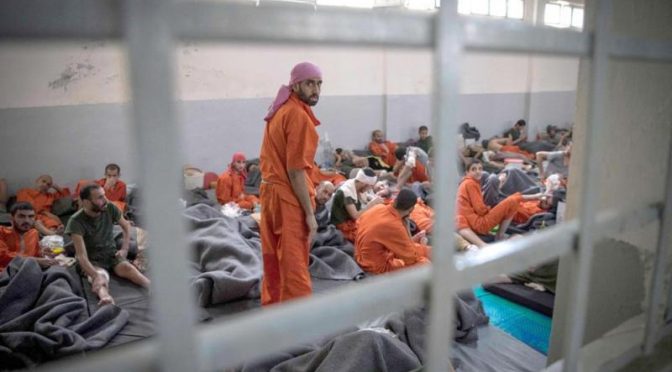 The attempt to grab Syria using ISIS terrorists for the benefit of Israel has failed and has been officially ended with the Russia-Turkey joint patrols over the Northeast Syrian border, specifically to provide a safer path for the reentry of more than a million Syrian refugees from Turkey. The big question now is: what to do with the thousands of ISIS militants still holed up in Turkish prisons and in the Idlib province?

Turkey President Erdogan obviously is now having the last laugh as he wants to please his Russian counterpart with not just a threat, but to actually send these armed pawns back to Europe, where the idea of using terror to effect regime change in the Middle East and in the rest of the world, really comes from.

Erdogan began to pivot towards Russia in more concrete terms after he survived a CIA coup d’ etat with the timely aid of the Russian intelligence. He has provided entry for ISIS terrorists into Syria, allowed the passage of oil tanker trucks in smuggling Syrian oil for the West, and provided a buffer zone for refugees before entering Europe early on.

“You should revise your stance towards Turkey, which at the moment holds so many Isis members in prison and at the same time controls those in Syria,” Erdoğan told European countries in remarks to reporters in Ankara on Tuesday.

“These gates will open and these ISIS members who have started to be sent to you will continue to be sent. Then you can take care of your own problem.”

In about the same time, a certain British mercenary James Le Mesurier, touted to be the co-founder of the pseudo-humanitarian group called White Helmets reportedly “fell from his apartment balcony and died.”

To cover up on the possibility that this was self-cleansing on the part of the MI6, the BBC Diplomatic Editor Mark Urban suggested that the dead man, widely reported online to have been a former MI6 agent, may have been murdered by the Russians, a comment Urban based on the spurious grounds that “a former colleague told” him.

However, Mark Urban sensing that might have committed a grave mistake is now backtracking from his anti-Russian narrative.

We can of course speculate that what really had happened is that the ISIS leadership on the ground has started biting the hand that trained and used them since 2011 to smuggle oil from Syria, now that they are being abandoned systematically.

There’s simply is no need for the Russians to eliminate any of the MI6 assets operating in Syria now simply because the ISIS terrorists and their families are already cauldroned and checkmated in Idlib. All that is needed is to unleash these hardened terrorists right into the heart of the Anglo-Roman Empire, if that’s what it takes to wake the people up and do something to finally end the Western oligarchy’s lunatic intrusions everywhere.

The war in Syria has claimed an estimated 400,000 victims since it began, and the ISIS ideology has spread even as far as the Philippines, where the government there has no other choice but to bomb the entire ISIS-infected City of Marawi and forever eliminate the ISIS appointed Emir of Southeast Asia — Isnilon Hapilon.

It’s only fitting that justice be accorded to them who continue to mourn for their departed loved ones.

As for the Europeans, Turkey’s message could never be clearer,

“There is no need to try to escape from it, we will send them back to you. Deal with them how you want. Turkey is not a hotel for Daesh members.”

3 thoughts on “Turkey is Not A Hotel for Jihadists, EU Must Provide A Grand Welcome”