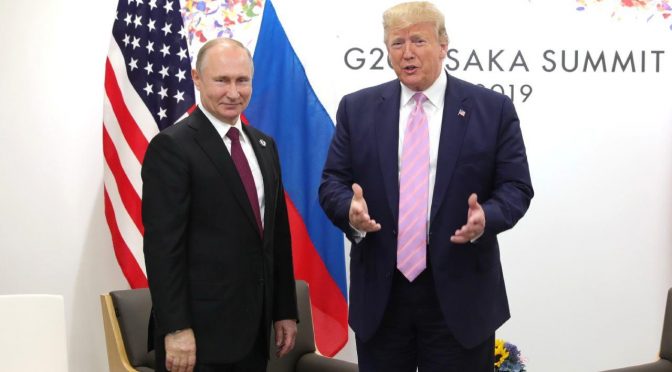 But, as TASS reported, “The two leaders also discussed a range of issues of mutual interest.” This follows Putin’s issuing an invitation to Trump to attend the May 9, 2020 celebration in Moscow of the 75th anniversary of the joint victory over Nazi Germany.

Also today, Ukraine and the self-declared independent republics in the Donbas exchanged prisoners, in an “all-for-all” agreement, reflecting the new Ukrainian President Volodymyr Zelensky’s efforts to end the conflict and restore relations with Russia. It is this process, directly supported by both Presidents Putin and Trump, which is ignored (and opposed) by those engaged in the outrageous effort to impeach President Trump.

In fact, the accusation that Trump undermined the national security by holding back military aid to Ukraine is a lie, covering up the fact that Trump’s cooperation with Zelensky has the potential of both ending the conflict between Russia and Ukraine, and also exposing the real crime in that nation—the role of Barack Obama and Joe Biden in carrying out a criminal coup in 2014 against the elected government of Ukraine, placing self-confessed neo-Nazis in power. It was these Obama/Biden-sponsored neo-Nazis and their Western economic overlords who destroyed Ukraine’s economy and provoked the deadly war against their political enemies in the east of Ukraine, with the intention of creating a military confrontation between NATO and Russia. Trump is spoiling this Devil’s handiwork.

At the same time, Trump and Xi Jinping are moving to resolve the massive imbalance of trade though the “phase one” trade agreement. While the Congress and the neocons within Trump’s cabinet continue escalating their McCarthyite attacks on China and Chinese-Americans within the U.S., Trump himself has fiercely asserted his commitment to sovereignty, not only for the U.S. against the “globalizers,” but also for China and all other nations. The U.S. President has refused to attack China over Hong Kong or China’s counter-terrorism operations in Xinjiang, insisting that these are sovereign Chinese concerns.

It is precisely because Trump’s actions threaten the imperial age of geopolitics—to return to the Westphalian policy of sovereign nation-states cooperating on the basis of the common aims of mankind—that MI6, the Obama intelligence team, and the corrupt Congress are desperately attempting to drive him from office by any means they can.

The greatest danger to the effort to bring about a new paradigm based on peace through development lies in the looming collapse of the biggest financial bubble in history. The Federal Reserve has been wildly pumping funny-money into the banking system since September, openly warning that the year-end balancing of the books of (essentially bankrupt) institutions could blow up the entire system.

The Economist, a leading voice of the British Empire, in a Dec. 25 article titled “Buckle Up for America’s Ugly Election and Faltering Economy,” implied that the City of London may even pull the plug on the bloated debt bubble in order to undermine President Trump’s re-election, declaring that the “noticeable cooling of the American economy will challenge [Trump’s] claim to have made America great again.”

The new year will indeed be a time of momentous change, either for good or for ill. It is a time to heed the words of Friedrich Schiller: “The dignity of man into your hands is given. Its keeper be. It sinks with you; with you it will be risen.”