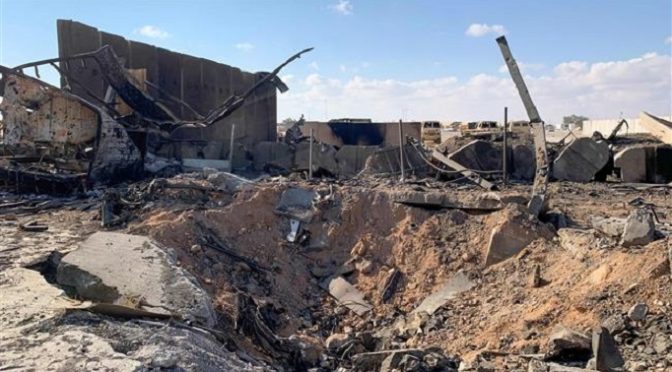 The United States military has said that 11 of its troops were wounded in an Iranian retaliatory missile attack last week despite Washington’s initial claim denying casualties.

“While no US service members were killed in the January 8 Iranian attack on al-Asad Air base, several were treated for concussion symptoms from the blasts and are still being assessed,” US Central Command spokesman Captain Bill Urban said in a statement on Thursday.

On January 8, the Islamic Revolution Guards Corps (IRGC) fired volleys of ballistic missiles at Ain al-Asad, a large airbase hosting about 1,500 US troops, and another outpost in Erbil, the capital of the semi-autonomous Iraqi Kurdistan.

The missile operation was in response to Washington’s January 3 assassination of top Iranian general Qassem Soleimani, who led the IRGC’s Quds Force.

The assassination also resulted in the death of Abu Mahdi al-Muhandis, who was the second-in-command of Iraq’s Popular Mobilization Units (PMU).

Speaking on the morning following Iran’s reciprocal military operation, US President Donald Trump had said that “no Americans were harmed in last night’s attack”.

“We suffered no casualties, all of our soldiers are safe, and only minimal damage was sustained at our military bases,” he added.

The Pentagon had also initially ruled out any casualties from the attack.

According to the evidence that has been made available to us at this point, it is obvious that the US is lying about the extent of the damage inflicted upon its assets and infrastructure at the Ain al-Asad base.

The Iranian missile attack for the most part targeted Apache (AH-64) attack helicopter shelters, and it is conservatively estimated to have damaged at least a dozen of them. Airborne drones were rendered inoperable after its satellite communication equipment was hit.

FarsNews reported earlier that 80 were killed and 200 wounded on the first wave of Iranian reprisal. After denying that anything of that sort happens, the US military has finally admitted to have transported 11 troops to Baghdad, Jordan and Israel.

Speaking on Thursday, Urban said US soldiers injured from the Iranian missile strikes had been taken to US bases outside Iraq for further treatment “out of an abundance of caution”.

Speaking on Thursday, head of the Aerospace Division of the Islamic Revolution Guards Corps (IRGC) Brigadier General Amir Ali Hajizadeh said dozens of US troops had been killed and injured in the operation.

According to Hajizadeh, the US military conducted at least nine sorties of C-130 flights after the missile strikes, taking wounded personnel to Jordan and Israel while Chinook helicopters transferred the injured to the US hospital in Baghdad.

Initial reports from the Ain al-Asad Base claimed nearly 40 detonations in total despite the fact the number of actual warhead impacts was about fifteen, indicating that there were around two dozen cases of secondary explosions (fuel and ammo going off after being ignited).

In conclusion, according to the evidence we have available to us currently, there is no doubt that the United States has completely distorted the gravitude of Iran’s strikes. The mainstream media in the West have also seemingly refrained from acknowledging much of the damage, apart from on occasion.

After both sides claimed victory over the other, there’s been a report that one of the reasons why Trump did not order a counterattack on Iran was the phone call with Mohammed Bin Salman, who wasn’t made aware of any prior Soleimani assassination plans and has subsequently raised concerns over its own vulnerability from Iranian missile attacks.

Both Saudi Arabia and Iran were on the cusp of achieving peaceful engagement in the region, with Iraq as the broker, when Gen. Soleimani brought with him the message of the Iranian government to its Saudi counterpart on the day he arrived in Baghdad airport, where he was ambushed on orders of Donald Trump, as aided with the real-time coordinates supplied by MOSSAD intelligence.

It is also interesting to note that the move towards peace in the region precipitated immediately after Putin’s visit to UAE and Saudi Arabia, few months before. We understood this to be for an offer for the Saudis to have security without the usual string attached that the US has provided.

More so with the more recent visit of the Russian Foreign Minister Lavrov to the White House, which should have informed the Donald about future actions worldwide. Yet, in his infinite wisdom, Trump decided that the Israel Lobby weights more to him than forward thinking countries.

Incidentally, in the aftermath of the Soleimani assassination, the Saudi government has reportedly paid $500 million for the presence of US forces in the country.

Indeed, there’s nothing as profitable as an enterprise where its annual expenses are lawfully paid for by the apathetic taxpayers, operated by obedient armed personnel, and patronized by a large, resource-rich captive market.

We can conclude right now that the US is not ready yet to take the entire world to the next level of our evolution as a species.

The non-action against the Deep State, and more visible, aggressive measures towards suppressing independent journalism, digitization of the whole financial system, continuing mass surveillance, rigging of the electoral system, all contribute to the continued existence of the exceptionalist class of our society.

This means the continued suppression of all technologies that could set us all free from the bondage of economic and spiritual slavery.