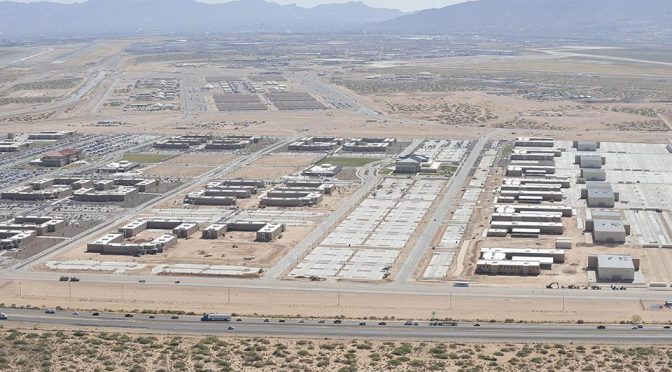 Fort Bliss was among several military sites under consideration by the Biden administration to process and house unaccompanied children who have migrated to the United States, some of whom had been forcibly separated from their families under the previous administration. Fort Bliss has the capacity to hold up to 7,500 children, with up to another 4,000 beds for people in custody at a family residential center.

Many military bases in the United States are known to be riddled with toxic hazards from past military operations, spills, storage of toxic chemicals, unexploded ordnances, and firing ranges. Currently, 130 military bases and installations are considered priority Superfund sites by the Environmental Protection Agency.

There are currently 651 Department of Defense and National Guard sites potentially contaminated by toxic chemicals known as PFAS, short for per- and polyfluoroalkyl substances. PFAS don’t easily break down, and they can persist in your body and in the environment for decades.

“We are extremely concerned to hear of plans to detain immigrant children in Fort Bliss. Military bases filled with contaminated sites are no place for the healthy development of any child,” said Melissa Legge, an attorney at Earthjustice.

“We recognize that the humanitarian situation at the border needs to be addressed in humanity, compassion, and expediency. Part of that requires keeping children away from toxic military sites. While we are hopeful that the Biden administration will keep children safe, we remain vigilant and ready to continue protecting detained minors in toxic facilities. Immigrant children under the care of the federal government should not be in cages, let alone toxic sites in military bases.”

Several of the military sites under consideration are contaminated with potentially hazardous pollutants and some are even located on or near Superfund sites. Superfund sites under consideration for housing children in immigration custody include the Homestead Detention Facility in Homestead, FL, Moffett Field in Mountain View, CA, and Joint Base San Antonio in Texas.

Many of the sites remain inadequately remediated and still contaminated. Without proper environmental reviews, there is no way to guarantee these sites are safe for children, potentially exposing them to toxic chemicals that could have lifelong health impacts.

Fort Bliss is no exception. Earthjustice, along with partners including Alianza Nacional de Campesinas and the National Hispanic Medical Association, released hundreds of searchable documents and an expert analysis of previous plans for construction of a temporary detention center for children and families at Fort Bliss.

These records document several problems with the project, including that the Army did not adequately investigate to determine what types of waste had been disposed of at the site, that the methods used for testing the soil samples were inadequate or never completed, and that samples taken after the supposed clean-up still had concerning levels of pollution.

Additionally, illegal dumping on the site may continue to this day. As a result, there is now even greater uncertainty about the environmental hazards at the site and a greater need for thorough testing, analysis, and cleanup.

“We are deeply concerned about the decision to open temporary detention facilities for minors at Fort Bliss and the potential health risks to the minors detained in tents there,” said Elena Rios, MD, President & CEO of the National Hispanic Medical Association, a client in Earthjustice’s 2018 Freedom of Information Act lawsuit regarding the base. “Based on what we found in our Fort Bliss investigation in 2018, there are still present toxins from past landfills, which means children could be forcibly exposed to toxicity linked to cancer and development defects.”

The Biden administration has the opportunity to change course after decades of failed immigration policies. The United States government has shown flagrant disregard for the health of those in custody, most recently including forced sterilization, the use of industrial chemical disinfectants at other migrant detention facilities, and uncontrolled outbreaks of COVID-19.

These ongoing failures have created conditions that make it impossible to keep those in custody safe, and we are therefore calling for the immediate halt of any plans to place children in such unsafe facilities, the securing of safe and suitable housing for children while they are required to remain in the care of the Department of Health and Human Services, and the development of solutions that do not involve placing children on or near toxic sites, military sites, or in detention-like settings.

The original source of this article is Earthjustice Copyright © Earth Justice, Earthjustice, 2021