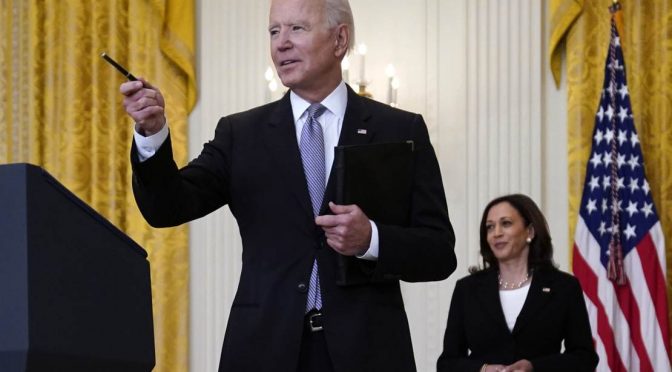 For weeks I’ve been predicting Biden would capitulate to the Republican-McConnell proposals on infrastructure, including funding it without taxing corps-investors-wealthy.

What’s not revealed, however, is how much of this total is being earmarked in separate bills that have been moving toward passage that subsidize manufacturing, tech corps, and chip-auto companies. The latter, already agreed to is $52B.

Another $110B is in the so-called ‘Endless Frontier Act’, subsidizing US tech development in competition with China. Another unknown amount will no doubt come from Biden’s original $400B targeting manufacturing in his original Infrastructure (aka American Jobs Act) proposal of $2.3T when initially announced months ago.

We now have the latest Corporate Wing of the Democrat Party (Biden, Shumer, Manchin, et. al.) completing their charade negotiations with the Republicans. Step by step the spending was cut, from $2.3T, to the current $579B.

Behind the scenes over the past weeks, segments of Biden’s $2.3T were ‘broken out’ of the original $2.3T and moved on separate tracks toward passage. Both Dems and Repubs were in agreement on these elements: i.e. $52B for US semiconductor and auto companies, R&D for US manufacturers in the so-called ‘Endless Frontier Act’, and other provisions of Biden’s $400B proposed spending on manufacturing and US multinational corp subsidization in his original $2.3T Infrastructure proposal.

As we await the final version of the stripped down $579B in next few days, the only question is how much of it will be paid by consumers in the form of gas taxes, fees, and government borrowing (raising the national debt) vs. how much by tax hikes on the wealthy originally proposed by Biden and the Dems during the election.

Having already dropped his proposal to raise taxes on corporations back to 28% from the 21% level under Trump (who cut it from 35%), thus raising $850B in revenue, Biden will likely now drop remaining tax hikes on wealthy individuals he originally proposed as well.

Make no mistake, this was all nicely ‘engineered’ by the corporate wing of the Democrat party, firmly in control since 1992 of policy, in cooperation with McConnell and the Republicans. Blue Dog Democrat Senator, Joe Manchin, served nicely as the ‘point man’ to take the heat off the Democrat leadership, as all parties danced toward a pre-arranged ‘compromise’ that leaves Trump’s corporate-Investor-Wealthy tax cuts under Trump ($4T) intact.

Biden and Dems will now try to spin the result, claiming it will provide millions of jobs, when it won’t. It will likely encourage more offshoring of jobs, subsidizing US tech and multinational corp manufacturers instead. With Biden having separately agreed to a minimal 15% corporate tax rate with European capitalists, the Trump 21% vs. the 15% will certainly encourage the continued offshoring of US jobs.

In addition, the new subsidies to US multinational tech and manufacturing corps in the $52B chip bill, the ‘Endless Frontier’ bill, and the elements of the $579B now agreed infrastructure bill, will all further exacerbate the loss of US jobs mostly to offshore.

For the US economy recovery, it is clear the $579B will be too little and likely too late. The Covid 19 relief act passed earlier this year will dissipate in terms of its economic impact by late summer 2021–just as the 2020 minimal stimulus acts dissipated within months.

The US economy is getting a ‘bump’ from reopening this spring and summer, just like it did from the aborted reopening last summer 2020. That temporary rebound relapsed by fourth quarter 2020. It will be interesting to watch as the current insufficient stimulus of $579B has the same temporary rebound and results in another fading economic recovery by early 2022!

(The following are my ‘running tweets’ since early June predicting the course of events with regard to infrastructure spending, now culminating in Biden’s capitulation. It’s all beginning to look a lot like Obama’s in 2009-10):

#Infrastructure Next question: how much of Biden’s $579B capitulation includes prior agreed to $52B subsidy to US chip corps, $110B ‘Endless Frontier Act’ subsidy for US corps R&D, & Biden’s $400B proposal for US manuf subsidies in his initial $2.3T proposed infrastructure bill?

#Infrastructure Senate group, with 10 Dems, proposing $973B package (with $394B already authorized in prior transport & other spending–only $579B new). Biden at $1.2T. Watch around $1.1T (as predicted here). Paid for by fees, leaving Trump’s $4T wealthy tax cuts untouched.

#Infrastructure New Biden strategy: break out parts of proposed $1T bill (down from $2.2T) and pass laws separately: $250B for manuf, R&D, chips; $303B for road-rail transport; Prior $174B proposed for govt buying electric busses & building charging stations, now down to $8.1B.

#Infrastructure negotiations break down between Dems and Republicans. In the process, Biden cuts his proposal from $2.25T to $1T with no Republican counter except to ‘move money around’ already authorized to be spent. (McConnell, with Manchin help, out-maneuvering Dems again)

#Infrastructure: prediction: watch Biden cut total new spending to $700B (over 10 yrs) but claim it’s still $1T by adopting Manchin’s proposal to include $308B already authorized in highway spending + most of $700B will be subsidies to manufacturing & tech corps already agreed to

#Infrastructure Why did Biden reportedly ‘signal’ to Republican Senators when he last met with them that he’d accept a $1 trillion package? If he did, he’s either incompetent as a negotiator, or else negotiations are just a game being played for public consumption by both parties