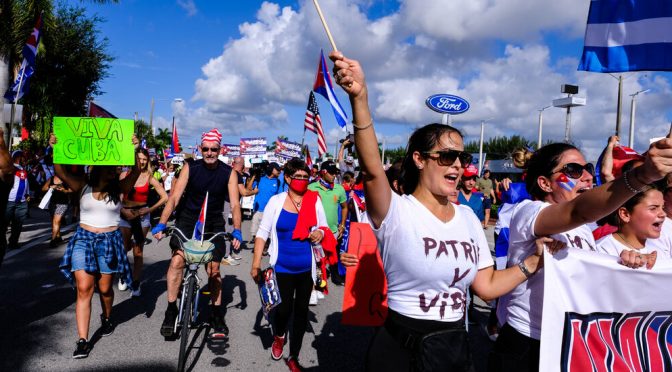 An intentionally misinformative outreach is what the U.S. government is relying on to justify its punitive measures on Cuba.

Anyone who believed the departure of former U.S. President Donald Trump would constitute a return to more effective diplomacy has been grievously mistaken.

The Biden Administration is not even close to replicating the slightest approach towards Cuba which former U.S. President Barack Obama moved towards, following the release of the Cuban Five. On the contrary, not only has U.S. President Joe Biden not reversed Trump’s policies, but extended them to include further punitive measures. It is becoming clear that the U.S. was only biding its time to declare openly aggressive policies against Cuba.

For months, Biden downplayed Cuba as an unimportant item on the U.S. foreign policy agenda. The passive stance, which tacitly affirmed approval of Trump’s sanctions and designations against the island, was paused at the start of the protests in Cuba, funded by the National Endowment for Democracy (NED) and exacerbated by the illegal U.S. blockade on the island.

Earlier this week, Reuters reported unnamed Us officials stating that Cuba is now a “top priority” for the U.S. government, even as in Miami, Cuban dissidents have been calling for U.S. military intervention. Republican Mayor of Miami, Francis Suarez, called upon the U.S. to create an international coalition for intervention against Cuba.

So far, Biden has announced new sanctions targeting the head of the Cuban military and the Cuban Ministry of Interior. “This is just the beginning – the United States will continue to sanction individuals responsible for oppression of the Cuban people,” the White House press release partly states.

Media is calling the protests unprecedented and the reason why Biden did not follow in Obama’s footsteps in terms of thawing relations between Cuba and the U.S.. However, the protests did not commence with Biden’s tenure, which indicates the current administration was planning to maintain Trump’s sanctions against Cuba. By endorsing the usual purported democracy rhetoric, Biden has allowed Miami’s right-wing dissidents an open chance to influence politics against Cuba.

While Cubans are drawing attention to scarcities as a result of the U.S.-imposed illegal blockade which the international community votes against while failing to stand up to the U.S., in Miami there is talk of a purported “revolution,” calling the protests a “catalyst for change” while not a single mention of the blockade is made when the Cuban dissidents speak about organising for humanitarian aid.

Cuba’s quandary, according to mainstream media, is merely a result of government oppression, yet the people’s complaints are indicative of the economic hardships exacerbated by the U.S.. With mainstream media erroneously showing footage of pro-socialist demonstrations labelled as anti-government protests, the usual setups for regime change which are synonymous with the U.S. have been clearly set in motion.

White House Press Secretary Jen Psaki has described Biden’s approach towards Cuba as “addressing the moment”. Yet U.S. involvement in destabilising Cuba throughout the years undermine the statement. Since the triumph of the Cuban revolution, the U.S. government has prioritised Cuban Americans as their allies in its anti-Cuba agenda.

“We are making sure that Cuban Americans are a vital partner in our effort to provide relief to suffering people on the island,” Biden declared. This façade of inclusion, however, merely disguises the fact that Cuban dissidents and the U.S. government are exploiting the humanitarian paradigm for political benefit.

An intentionally misinformative outreach is what the U.S. government is relying on to justify its punitive measures on Cuba. There is nothing novel in the U.S. approach towards Cuba, which was tried and tested in Latin America, and more recently in the Middle East.

Meanwhile, contrary to the early days of the pandemic, there is no scrutiny of the U.S. illegal blockade which drives humanitarian deprivation in Cuba. A sound narrative, based upon Cuba’s achievements and its internationalist role, has been abandoned for imperialist designations.

In the midst of pointing fingers at Cuba, who is holding the U.S. accountable?

Ramona Wadi is an independent researcher, freelance journalist, book reviewer and blogger. Her writing covers a range of themes in relation to Palestine, Chile and Latin America.