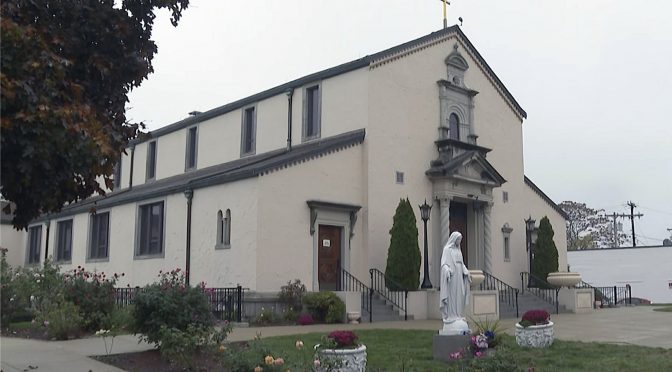 As the pandemic began to unfold, scores of Catholic dioceses across the U.S. received aid through the Paycheck Protection Program while sitting on well over $10 billion in cash, short-term investments or other available funds, an Associated Press investigation has found. And despite the broad economic downturn, these assets have grown in many dioceses.

Yet even with that financial safety net, the 112 dioceses that shared their financial statements, along with the churches and schools they oversee, collected at least $1.5 billion in taxpayer-backed aid. A majority of these dioceses reported enough money on hand to cover at least six months of operating expenses, even without any new income.

The financial resources of several dioceses rivaled or exceeded those available to publicly traded companies like Shake Shack and Ruth’s Chris Steak House, whose early participation in the program triggered outrage. Federal officials responded by emphasizing the money was intended for those who lacked the cushion that cash and other liquidity provide. Many corporations returned the funds.

Overall, the nation’s nearly 200 dioceses, where bishops and cardinals govern, and other Catholic institutions received at least $3 billion. That makes the Roman Catholic Church perhaps the biggest beneficiary of the paycheck program, according to AP’s analysis of data the U.S. Small Business Administration released following a public-records lawsuit by news organizations. The agency for months had shared only partial information, making a more precise analysis impossible.

Already one of the largest federal aid efforts ever, the SBA reopened the Paycheck Protection Program last month with a new infusion of nearly $300 billion. In making the announcement, the agency’s administrator at the time, Jovita Carranza, hailed the program for serving “as an economic lifeline to millions of small businesses.”

Church officials have said their employees were as worthy of help as workers at Main Street businesses, and that without it they would have had to slash jobs and curtail their charitable mission as demand for food pantries and social services spiked. They point out the program’s rules didn’t require them to exhaust their stores of cash and other funds before applying.

But new financial statements several dozen dioceses have posted for 2020 show that their available resources remained robust or improved during the pandemic’s hard, early months. The pattern held whether a diocese was big or small, urban or rural, East or West, North or South.

In Kentucky, funds available to the Archdiocese of Louisville, its parishes and other organizations grew from at least $153 million to $157 million during the fiscal year that ended in June, AP found. Those same offices and organizations received at least $17 million in paycheck money. “The Archdiocese’s operations have not been significantly impacted by the Covid-19 outbreak,” according to its financial statement.

In Illinois, the Archdiocese of Chicago had more than $1 billion in cash and investments in its headquarters and cemetery division as of May, while the faithful continued to donate “more than expected,” according to a review by the independent ratings agency Moody’s Investors Service. Chicago’s parishes, schools and ministries accumulated at least $77 million in paycheck protection funds.

Up the interstate from Charlotte in North Carolina, the Raleigh Diocese collected at least $11 million in aid. Yet during the fiscal year that ended in June, overall offerings were down just 5% and the assets available to the diocese, its parishes and schools increased by about $21 million to more than $170 million, AP found. In another measure of fiscal health, the diocese didn’t make an emergency draw on its $10 million line of credit.

Catholic leaders in dioceses including Charlotte, Chicago, Louisville and Raleigh said their parishes and schools, like many other businesses and nonprofits, suffered financially when they closed to slow the spread of the deadly coronavirus.

Some dioceses reported that their hardest-hit churches saw income drop by 40% or more before donations began to rebound months later, and schools took hits when fundraisers were canceled and families had trouble paying tuition. As revenues fell, dioceses said, wage cuts and a few dozen layoffs were necessary in some offices.

Catholic researchers at Georgetown University who surveyed the nation’s bishops last summer found such measures weren’t frequent. In comparison, a survey by the investment bank Goldman Sachs found 42% of small business owners had cut staff or salaries, and that 33% had spent their personal savings to stay open.

Church leaders have questioned why AP focused on their faith following a story last July, when New York Cardinal Timothy Dolan wrote that reporters “invented a story when none existed and sought to bash the Church.”

By using a special exemption that the church lobbied to include in the paycheck program, Catholic entities amassed at least $3 billion — roughly the same as the combined total of recipients from the other faiths that rounded out the top five, AP found. Baptist, Lutheran, Methodist and Jewish faith-based recipients also totaled at least $3 billion. Catholics account for about a fifth of the U.S. religious population while members of Protestant and Jewish denominations are nearly half, according to the Pew Research Center.

Catholic institutions also received many times more than other major nonprofits with charitable missions and national reach, such as the United Way, Goodwill Industries and Boys & Girls Clubs of America. Overall, Catholic recipients got roughly twice as much as 40 of the largest, most well-known charities in America combined, AP found.

The complete picture is certainly even more lopsided. So many Catholic entities received help that reporters could not identify them all, even after spending hundreds of hours hand-checking tens of thousands of records in federal data.

The Vatican referred questions about the paycheck program to the United States Conference of Catholic Bishops, which said it does not speak on behalf of dioceses.

Presented with AP’s findings, bishops conference spokeswoman Chieko Noguchi responded with a broad statement that the Paycheck Protection Program was “designed to protect the jobs of Americans from all walks of life, regardless of whether they work for for-profit or nonprofit employers, faith-based or secular.”

The AP’s assessment of church finances is among the most comprehensive to date. It draws largely from audited financial statements posted online by the central offices of 112 of the country’s nearly 200 dioceses.

The church isn’t required to share its financials. As a result, the analysis doesn’t include cash, short-term assets and lines of credit held by some of the largest dioceses, including those serving New York City and other major metropolitan areas.

Some 112 Roman Catholic dioceses in the U.S. collectively had over $10 billion in cash and other funds when they received at least $1.5 billion from the Paycheck Protection Program. An Associated Press investigation found the dioceses had more money available for expenses than they acknowledged in their financial statements. And despite the pandemic, those funds grew in many dioceses. Below is a sampling of dioceses and affiliated organizations.

The analysis focused on available assets because federal officials cited those metrics when clarifying eligibility for the paycheck program. Therefore, the $10 billion AP identified doesn’t count important financial pillars of the U.S. church. Among those are its thousands of real estate properties and most of the funds that parishes and schools hold. Also excluded is the money — estimated at $9.5 billion in a 2019 study by the Delaware-based wealth management firm Wilmington Trust — held by charitable foundations created to help dioceses oversee donations.

In addition, dioceses can rely on a well-funded support system that includes help from wealthier dioceses, the bishops conference and other Catholic organizations. Canon law, the legal code the Vatican uses to govern the global church, notes that richer dioceses may assist poorer ones, and the AP found instances where they did.

In their financial statements, the 112 dioceses acknowledged having at least $4.5 billion in liquid or otherwise available assets. To reach its $10 billion total, AP also included funding that dioceses had opted to designate for special projects instead of general expenses; excess cash that parishes and their affiliates deposit with their diocese’s savings and loan; and lines of credit dioceses typically have with outside banks.

Some church officials said AP was misreading their financial books and therefore overstating available assets. They insisted that money their bishop or his advisers had set aside for special projects couldn’t be repurposed during an emergency, although financial statements posted by multiple dioceses stated the opposite.

For its analysis, AP consulted experts in church finance and church law. One was the Rev. James Connell, an accountant for 15 years before joining the priesthood and becoming an administrator in the Milwaukee Archdiocese. Connell, also a canon lawyer who is now retired from his position with the archdiocese, said AP’s findings convinced him that Catholic entities did not need government aid — especially when thousands of small businesses were permanently closing.Father Jim Connell poses for a portrait outside his home in Milwaukee on Wednesday, Dec. 2, 2020. (AP Photo/Morry Gash)

“Was it want or need?” Connell asked. “Need must be present, not simply the want. Justice and love of neighbor must include the common good.”

Connell was not alone among the faithful concerned by the church’s pursuit of taxpayer money. Parishioners in several cities have questioned church leaders who received government money for Catholic schools they then closed.

Elsewhere, a pastor in a Western state told AP that he refused to apply even after diocesan officials repeatedly pressed him. He spoke on condition of anonymity because of his diocese’s policy against talking to reporters and concerns about possible retaliation.

The pastor had been saving, much like leaders of other parishes. When the pandemic hit, he used that money, trimmed expenses and told his diocese’s central finance office that he had no plans to seek the aid. Administrators followed up several times, the pastor said, with one high-ranking official questioning why he was “leaving free money on the table.”

The pastor said he felt a “sound moral conviction” that the money was meant more for shops and restaurants that, without it, might close forever.

As the weeks passed last spring, the pastor said his church managed just fine. Parishioners were so happy with new online Masses and his other outreach initiatives, he said, they boosted their contributions beyond 2019 levels.

“We didn’t need it,” the pastor said, “and intentionally wanted to leave the money for those small business owners who did.”