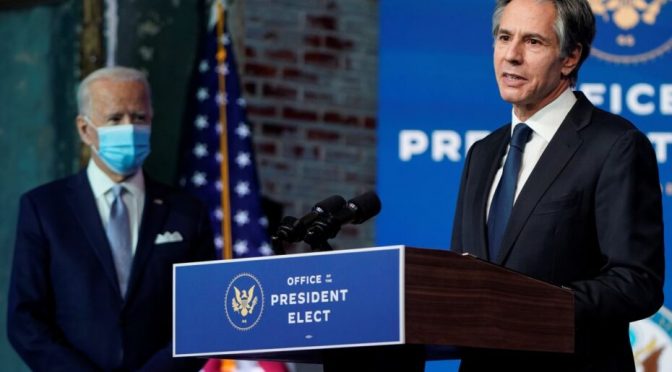 Whenever one gets into discussions about the decline of America’s ability to positively influence developments around the world a number of issues tend to surface.

First is the hubristic claim by successive presidents that the United States is somehow “exceptional” as a polity while also serving as the world’s only superpower and also the anointed Leader of the Free World, whatever that is supposed to mean.

Some critics of the status quo also have been willing to look a bit deeper, recognizing that it is the policies being pursued by the White House and Congress that are out of sync with what is actually happening in Asia, Africa and Latin America, being more driven by establishing acceptable narratives than by genuine interests.

The problem starts at the top. One can hardly have a great deal of respect for presidents who appointed neocon or neoliberal ideologues Condoleezza Rice, Madeleine Albright, Hillary Clinton, Mike Pompeo or current incumbent Tony Blinken as Secretaries of State, but when all is said and done the area where the U.S. fails is most egregiously is in the personnel it actually sends overseas. It has far more non-professional ambassadors than any other country in the world.

Does the American public know, for example, that fully 44% of American Ambassadors sent overseas under Donald Trump were political appointees, whose sole distinction in many cases is that they contributed large sums of money to the Republican National Committee?

Though such individuals can sometimes turn out to be surprisingly effective, many frequently know nothing of the country that they have been assigned to and do not speak the local language.

To cite my own experience, in my 21 years as an intelligence officer spent mostly in Europe I did not once work for an ambassador who was a Foreign Service Officer career diplomat and few of the political appointees I knew never bothered to learn the local language.

Part of the problem is that many U.S. ambassadors do not know what their job consists of. Ambassadors have existed since the time of the ancient Greeks. They were from the beginning granted a special immunity which enabled them to talk to enemy spokesmen to attempt to resolve issues without resort to arms.

In the modern context, Ambassadors are sent to reside in foreign capitals to provide some measure of protection for traveling citizens and also to defend other perceived national interests. Ambassadors are not soldiers, nor are they necessarily the parties of government that ultimately make decisions on what to do when dealing with a foreign nation.

They are there to provide a mechanism for exchanging views to create a dialogue while at the same time working with foreign governments to avoid conflict, whether over trade or politics. They should be bridge-builders who explain how American politics function, how the American government works, and at the same time educate Americans on how the country they are based in sees the United States.

By all these metrics, the U.S. diplomatic effort has been a failure and, at the end of the day, the United States taxpayer spends astonishing sums of money to support its global representational and security structures that provide little in return, rarely experiencing any notable successes and watching the reputation of the U.S. decline due to sheer ineptness. In my experience, the worst U.S. Ambassadors tend to be academics, which brings us to Michael McFaul, who served as Ambassador to Russia under Barack Obama from 2012-2014.

To be sure, viewing Russia as an enemy is a bipartisan impulse among the Washington political class. The neoconservatives and their neoliberal allies have both long been dreaming of regime change for Moscow, either because it is perceived as a threat or as an unacceptable autocracy.

Given that, the appointment of Stanford Academic and Russia expert McFaul as Ambassador was intended to “reset” the bilateral relationship while also pushing the democracy promotion agenda and confronting various aspects of the domestic policies of the Vladimir Putin government that were considered unacceptable, to include the treatment of homosexuals.

Pursuing that end, McFaul made a point of openly meeting with the political opposition in Russia. He thereby antagonized the officials in the government that he should have been working with to bring about acceptable change to such an extent that his term of office became untenable and he was an embarrassing failure.

But now McFaul has turned the usual Washington trick, converting failure into personal success. He is a regular go-to guy when Democrats either in Congress or in the White House need expert testimony on Russia and he is reliably a passionate supporter of the largely unsustainable Russiagate tale and all that implies. He is again a tenured professor at Stanford, where another top government failure Condi Rice, she of “mushroom cloud” fame, serves as Director of the Hoover Institution.

McFaul was recently bothered by what he described as an anonymous presumed “Russian troll” attack on twitter which had referred to his failure as Ambassador to Russia. This is how he responded:

“I have a job for life at the best university in the world. I live in a giant house in paradise. I make close to a million dollars a year. I have adoring fans on tv and half a million followers on twitter 99% who also admire me. I’m doing just fine without a damn visa from Russia. And I am not afraid to tweet under my own name. I feel sorry for people like you who aren’t brave enough to do so.”

Not surprisingly, McFaul’s message, which was replayed in a number of places on the internet, struck many as a bit over the top, dripping with entitlement and self-esteem coming from someone who had been given an important government job and had only succeeded in making matters worse. He responded to the criticism by tweeting an addendum:

“I wrote that message in a private channel. I did not expect it to be published. But it was still a mistake, I apologize. It was arrogant and idiotic. A swarm of Russian trolls was accusing me of failure, and I responded in a most unprofessional way. Explanation, not excuse.”

Well, it’s nice to hear an apology for a change from anyone associated with the United States government, but the point is that McFaul is symptomatic of much of what is wrong in terms of how the White House makes policy impulsively and appoints poorly informed ideologues to implement what has been decided. McFaul is not unique.

President Donald Trump certainly set a precedent in providing a whole group of incompetents to support the clueless Mike Pompeo at State, to include Nikki Haley at the United Nations, Rick Grenell in Germany, David Friedman in Israel, and the ubiquitous John Bolton at the National Security Council. It is almost as if in the area of foreign policy, the United States government as it is currently configured is designed to fail.

The solution is obvious. The United States desperately needs a foreign policy that is based on genuine national interests. It needs to stop rewarding political donors and needs also to send people as Ambassadors who are sensitive to the culture and red lines existing in the countries where they are posted. That doesn’t mean approving what others do, but it does mean listening to what they have to say.

If one wants to restore America’s credibility and its reputation, examining the McFaul experience in Russia should be an excellent learning tool and taking steps so as not to repeat that failure would be a good place to start.