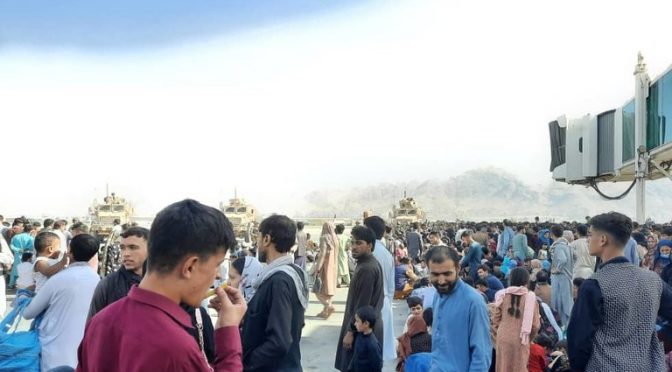 Anthony Eden was forced out of Downing Street over the military debacle in Egypt 65 years ago, so will Boris Johnson lose his premiership over this equally embarrassing rout? He should…

As the Taliban reasserts its dominance over Afghanistan, and the West’s unseemly scuttle continues, the UK is hastily attempting to get its citizens out of the capital. It is not just a capitulation to the forces of extreme Islamism – it is a national embarrassment.

Around 4,000 British nationals and Afghans eligible to claim refuge in the UK are trying to flee Kabul. Some 600 of our highly skilled and brave Parachute Regiment have been deployed to get out as many people as they can. Yet it is clear now that not all of them will be successful in their attempts to leave.

Defence Secretary Ben Wallace who is himself a former soldier, could not hide his dismay and struggled to fight back the tears during a radio interview when discussing the issue. Indeed, he admitted that “some people will be left behind,” before choking at the thought of leaving these people to face the grisly consequences. They will be stranded in Kabul and undoubtedly preyed upon by the Islamists, who will be seeking reprisals for the years of occupation. My heart bleeds for these unfortunate people – it should not be happening.

And now the UK Parliament is being recalled to discuss the situation in Afghanistan and MPs are being asked to cut their holidays short and return to Westminster. But what is the point and what will actually be achieved? The horse has already bolted and, by the time Parliament meets, the Taliban will already be firmly ensconced in Kabul and taking over the levers of state. If Parliament were going to be recalled, then it should have been last week, before the Taliban had arrived in Afghanistan’s capital city.

Of course, recalling Parliament will give Labour politicians the opportunity to wring their hands and denounce the government for its ineptitude. But would they, or indeed could they, have done anything differently? The simple answer is no. And, besides, who are they to criticise? It was a Labour prime minister, Tony Blair, who got us into this mess in the first place.

Shadow Foreign Secretary Lisa Nandy has heaped praise on Biden, claiming he had shown “clear-eyed leadership” and that “Boris Johnson could learn from the new president.” She also recently lauded a report that called for the British armed forces to be replaced with “human security services” that were “gender-balanced and ethnically diverse”. So, Labour are the last people from whom we should be taking lessons when it comes to military affairs.

Nevertheless, there is no getting away from the fact that the whole situation is an unedifying farce. With my historian’s hat on, I cannot think of a more ignominious military humiliation since the withdrawal from Suez, all the way back in 1956. That humiliation resulted in the fall of a prime minister. So, the next question has to be, will Boris Johnson survive this embarrassing withdrawal, or will he go the same way as Anthony Eden?

Well, let’s first look at the similarities of the situations. Firstly, Eden and Johnson share a characteristic in that they both coveted the top job for many years. Secondly, both of the situations they found themselves in were the result of actions taken by the United States. In Eden’s case, it was the US’s decision not to back the occupation of the Suez Canal; in Johnson’s, it was the Biden administration’s decision to scarper from Afghanistan, leaving the British no option but to do the same.

The difference between Suez and Afghanistan, however, is that the British have no real option but to follow the lead of the US these days, regardless of what a few Conservative politicians might say. As I wrote here recently, the UK simply does not have the military capability to act independently anymore, and that is the fault of politicians of all stripes for the past 40 years.

If any good does come of this humiliation, it might be a change in policy and attitude. Maybe we might start funding our armed forces properly and not be so reliant on the US. Indeed, if this sorry situation has taught the UK anything, surely it must be that it cannot always rely on the whims of American presidents. British politicians must realise that the country needs the ability to act independently, because, sometimes, decisions taken in the corridors of Washington are patently bad, as is the case today.

I have no doubt that Johnson, unlike Eden, will survive this sorry escapade. Not because he deserves to, mind, but mainly because there is no viable alternative to him. However, there is no doubt that the UK’s image and reputation around the world has been tarnished by this farce. From now on, we will be seen as an unreliable partner and viewed with suspicion by those who should be our allies – namely, people looking to escape fundamentalist dictatorships and dangerous theocracies. There is really no other way of saying it: this is a sad and shameful week for Britain.

Featured photo: Afghans crowd at the tarmac of the Kabul airport on August 16, 2021, to flee the country as the Taliban were in control of Afghanistan after President Ashraf Ghani fled the country and conceded the insurgents had won the 20-year war. © AFP

Paul A. Nuttall is a historian, author and a former politician. He was a Member of the European Parliament between 2009 and 2019 and was a prominent campaigner for Brexit.