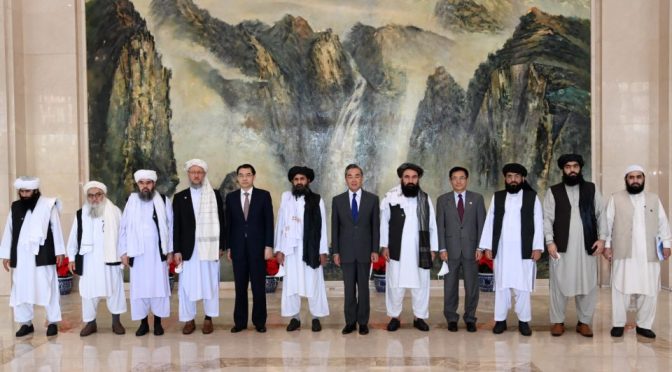 There’s a reason why the Talibans are not rampaging inside Kabul to celebrate their victory over the US military — Afghanistan’s economic cooperation with China via the Belt and Road Initiative will be in full swing.

Afghanistan hosts trillions of dollars worth of mineral deposits that China needs to continue producing industrial goods for commercial and military purposes. Obviously, the West is not in the best position to develop the country economically.

Another name has been chiseled on the tombstone in the graveyard of empires. The United States of America. 2001-2021.

Some commentators have said the abandonment of Afghanistan was the worst crisis facing the West since Suez. They are wrong. This is much worse. The canal crisis was about two empires with setting suns, the British and French, not appreciating or admitting their diminishing post-war role before the US stepped in to restore perspective.

Afghanistan is about betrayal, defeat and an increased terror threat. As the 20th anniversary of 9/11 approaches it is sobering to remember that the US went in to Afghanistan to topple the Taliban in 2001 and thereby reduce the terror threat. It left in 2021 and allowed the Taliban to take over. At the very least, it is difficult to explain.

The West in Asia is discredited. North Korea and China can be expected to take advantage.

It would be remiss of military planners in South Korea and Japan not to formulate a new defense strategy, one more firmly based on their own capabilities, in the light of the flight from Kabul.

America’s defeat by the Taliban will also comfort terror groups.

The Chinese saw it coming. Little commented on in the West, the Chinese hosted the Taliban in Tianjin at the end of July as Western military officials kept on talking about a timescale of months before Kabul was endangered.

The Chinese realized in July that the Taliban were going to win within a matter of days or weeks. Which is why China’s foreign minister Wang Yi, met Mullah Abdul Ghani Baradar, the Taliban’s political chief, in Tianjin, 100km east of Beijing, at the end of July.

Just before this meeting the Chinese had hosted the US deputy secretary of state Wendy Sherman, also in Tianjin. When they met the Taliban a few days later it was an indicator that they were taking the Taliban seriously. It was also a snub to the US, putting the Taliban envoy on par with Sherman.

Wang, as the occasion demanded, exchanged niceties with the Taliban. Beijing expected it to “play an important role in the process of peaceful reconciliation and reconstruction in Afghanistan”, according to a readout of the meeting from the foreign ministry.

What this really means; China will help the Taliban in aid and investment through the conduit of Pakistan. In return the Taliban must not interfere in China’s restive region of Xinjiang, where Muslims are in the majority and up to a million are incarcerated by Beijing.

There is money to be made and plenty of deals to be done.

The Belt and Road Initiative, China’s plan, in part, to establish trade routes from the East to Europe that cannot be targeted by US sanctions, needs to get into Afghanistan to better access the Central Asian republics.

Beijing is constructing a major road through the narrow Wakhan Corridor—the strip of mountainous territory connecting Xinjiang in China to Afghanistan (see map above and image right).

This will provide a key route for its Belt and Road Initiative to Pakistan and Central Asia. These routes are essential for Beijing to pursue its goals of increased trade with the region. Crucially, Afghanistan’s natural resources, especially rare earths, essential for the computer and telecoms industry, can be mined and transported.

Laughable as it sounds now, Kabul had shunned participation in the initiative to avoid getting on the wrong side of Washington.

China’s approach is based both on commerce as well as security. It hopes to rebuild Afghanistan’s infrastructure indirectly. In terms of Afghanistan, China has been described as Pakistan’s ATM. This approach also gives China a hands-off deniability.

Beijing hopes to avoid the harsh lessons of history. Afghanistan is a country where history is marked in tombstones.