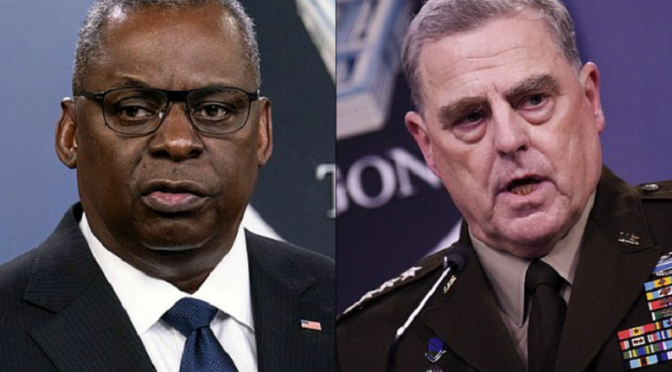 Dozens of retired generals and admirals are demanding that Defense Secretary Lloyd Austin and Chairman of the Joint Chiefs of Staff Mark Milley resign over the botched withdrawal from Afghanistan.

‘The retired Flag Officers signing this letter are calling for the resignation and retirement of the Secretary of Defense (SECDEF) and the Chairman of the Joint Chiefs of Staff (CJCS) based on negligence in performing their duties primarily involving events surrounding the disastrous withdrawal from Afghanistan,’ 90 retired top-ranking military officials wrote in an open letter released Monday.

They all proposed what they, as former U.S. military decision makers, felt should have happened in the withdrawal, including not rushing the withdrawal and not abandoning the Bagram Air Base.

More specifically, they said Milley and Austin should have advised Biden against the withdrawal.

‘As principal military advisors to the CINC (Commander in Chief)/President, the SECDEF and CJCS should have recommended against this dangerous withdrawal in the strongest possible terms,’ they wrote.

‘If they did not do everything within their authority to stop the hasty withdrawal, they should resign,’ the letter demands.

They also said that if Milley and Austin did advise against this, they should have resigned if Biden didn’t take their direction to show their disapproval and to not have to carry out the mission that ended up with lives lost of 13 U.S. service members.

‘[I]f they did do everything within their ability to persuade the CINC/President to not hastily exit the country without ensuring the safety of our citizens and Afghans loyal to America, then they should have resigned in protest as a matter of conscience and public statement.’

In a ISIS-K suicide bombing near the Kabul airport on Thursday, 13 U.S. troops were killed.

Biden took responsibility for their deaths, claiming everything that has happened in the withdrawal has been his doing.

Maj. Gen. Joe Arbuckle, one of the signatories, served in Vietnam and later commanded the US Army Industrial Operations Command (IOC) at Rock Island, Illinois

‘The hasty retreat has left initial estimates at ~15,000 Americans stranded in dangerous areas controlled by a brutal enemy along with ~25,000 Afghan citizens who supported American forces,’ the 90 retired generals and admirals wrote.

The letter comes as Joe Biden faces his own calls to resign or be impeached as those from all political backgrounds have criticized the president for his handling of the withdrawal.

Biden is expected to make remarks Tuesday afternoon lauding the end of the 20-year war in Afghanistan.

The Pentagon announced on Monday afternoon that all U.S. forces left Afghanistan – a day before the August 31 deadline for a total troop withdrawal.

The letter is from the group Flag Officers 4 Freedom – the same organization that released a similar statement in May accusing Biden of stealing the election.

The May letter, which was signed by more than 120 retired generals and admirals, also questioned Biden’s fitness for the presidency.

The letter echoes former President Donald Trump’s claims of widespread election fraud – which have not been borne out in the courts.

‘Without fair and honest elections that accurately reflect the “will of the people” our Constitutional Republic is lost,’ the letter from retired officers says.

‘The FBI and Supreme Court must act swiftly when election irregularities are surfaced and not ignore them as was done in 2020,’ they wrote.

Poindexter served as national security adviser to President Ronald Reagan. He was also convicted in the Iran-Contra Affair.

Before entering politics, Jackson was the top White House physician during the Trump and Obama presidencies.

He has been vocal in recent months about his doubts as to Biden’s cognitive fitness for the job of president.

Also signing on was Army Brig. Gen. Don Bolduc, who lost the Republican primary in 2020 to challenge Democratic Sen. Jeanne Shaheen, and is planning another Senate run.

In remarks to a Christian congregation, Boykin said of a Somali warlord: ‘I knew that my God was bigger than his.’

Last week, a Marine battalion commander resigned after he was relieved of his duties for speaking out against decisions made by his superiors in the Afghanistan exit.

Lieutenant Colonel Stuart Scheller published a new video online on Sunday addressing his resignation just days after he went viral for another video calling out his superiors for not ‘raising their hands and accepting accountability or saying, ‘We messed this up.”

Scheller’s original video criticized Austin and Milley for leaving the Bagram Air Base before all Americans and their allies had the chance to be evacuated.

It came after 11 Marines were killed along with two other U.S. troops and more than 90 Afghans in the suicide bombing at the Hamid Karzai International Airport in Kabul on Thursday.