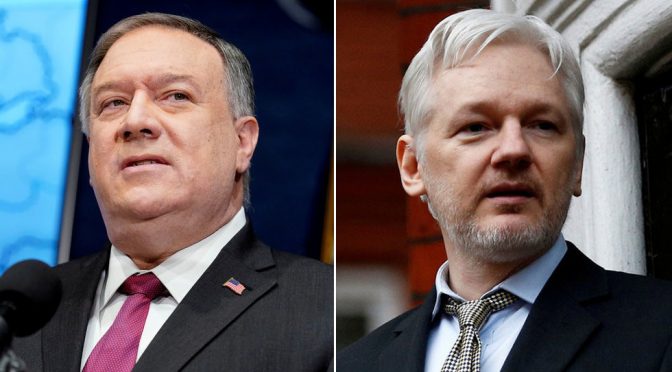 Under Obama, the CIA wanted to define Julian Assange and other journalists as “information brokers” in order to ramp up their spying on them. And during the Trump era, it prepared plans to abduct or kill the WikiLeaks founder.

The claims about the extraordinary lengths to which the CIA under Director Mike Pompeo were prepared to go to get Assange were made on Sunday in a Yahoo News report based on interviews with more than 30 former US officials. The report offers an insight into how the US national security apparatus was escalating its war with WikiLeaks under two consecutive US administrations.

At the peak of preparations for hostilities in 2017, the CIA was allegedly expecting Russian agents to help Assange flee the Ecuadorian Embassy in London. In such a contingency, the Americans, together with the British, were planning to engage in street battles against the Russians, potentially starting a firefight, ramming a Russian diplomatic vehicle, or shooting at the tires of a Russian plane to prevent it from lifting off, the story said. The attempt to spring Assange was reportedly expected on Christmas Eve.

“It was beyond comical,” a former senior official told the outlet regarding the situation in the vicinity of the embassy at the time. “It got to the point where every human being in a three-block radius was working for one of the intelligence services – whether they were street sweepers or police officers or security guards.”

The CIA was also deliberating plans to kill Assange and other members of WikiLeaks, the report said. Alternatively, the agency was considering snatching him from the embassy and bringing him to the US, or handing him over to the British authorities. At the time, the UK wanted Assange for skipping bail in an extradition trial on a request from Sweden – a case that has since been dropped.

The possibility of carrying out a successful rendition or assassination were described as “ridiculous” by one intelligence official, because of the location. “This isn’t Pakistan or Egypt – we’re talking about London,” the source was quoted as saying. There was also resistance in the Trump administration because such an operation might be deemed illegal under US law. A source said using CIA powers meant only for spy-versus-spy activities would be “the same kind of crap we pulled in the War on Terror.”

As far as the CIA was concerned, WikiLeaks prompted these extreme measures after the so-called ‘Vault 7’ publications, which exposed a cyber-offensive toolkit used by US agents. The leak of those tools was a major humiliation for US intelligence, so “Pompeo and [then-Deputy CIA Director Gina] Haspel wanted vengeance on Assange,” Yahoo was told.

Pompeo had to do some legal maneuvering so the agency could go more aggressively after Assange and WikiLeaks without having then-president Donald Trump sign off such operations. When, shortly after taking office, he infamously called WikiLeaks a “non-state hostile intelligence service” during a public speech, it was more than just rhetoric, according to the report. Designating in that way allowed the CIA to file its snooping under “offensive counterintelligence” activities, which it’s allowed to conduct on its own volition.

“I don’t think people realize how much [the] CIA can do under offensive [counterintelligence] and how there is minimal oversight of it,” a former official said.

While Pompeo’s CIA ramped up its “war on WikiLeaks” to 11, even under then-president Barack Obama the agency was likewise angling for ways to target the transparency group. It lobbied the White House to redesignate WikiLeaks and a number of high-profile journalists, including Glenn Greenwald and Laura Poitras as “information brokers,” allowing more surveillance powers to be deployed against them, the report says.

“Is WikiLeaks a journalistic outlet? Are Laura Poitras and Glenn Greenwald truly journalists?” a source speculated in an interview with Yahoo News. “We tried to change the definition of them, and I preached this to the White House, and got rejected.”

Ultimately, Assange was dragged out of the Ecuadorian Embassy and currently remains in custody in a high-security British prison. The US has appealed a court decision to deny its request to extradite him on charges related to hacking. Proceedings are expected to resume next month.

Concerns about jeopardizing the US case against Assange were among the factors that prevented the CIA’s plants from going further, according to Yahoo News. Assange’s defense team hopes this proves true.

“My hope and expectation is that the UK courts will consider this information and it will further bolster its decision not to extradite him to the US,” his lawyer, Barry Pollack, told the outlet when asked about the alleged CIA plans targeting his client.

Resentment towards Assange is a bipartisan endeavor in the US establishment. Hillary Clinton, Trump’s opponent in the 2016 election, reportedly joked about “droning” the Australian citizen back in 2010, but later said she didn’t remember having said that.

The presidential election and WikiLeaks’ publication of Democratic emails was a pivotal moment for the CIA’s campaign against Assange, according to Yahoo News, since it was able to claim the leak was carried out in collaboration with Russian intelligence. WikiLeaks denied it and Moscow insists the accusation of election interference was baseless and was part of the Democrats’ attempt to downplay Clinton’s defeat.

RT is an autonomous, non-profit organization that is publicly financed from the budget of the Russian Federation. For more information, contact: pr***@rt**.ru.