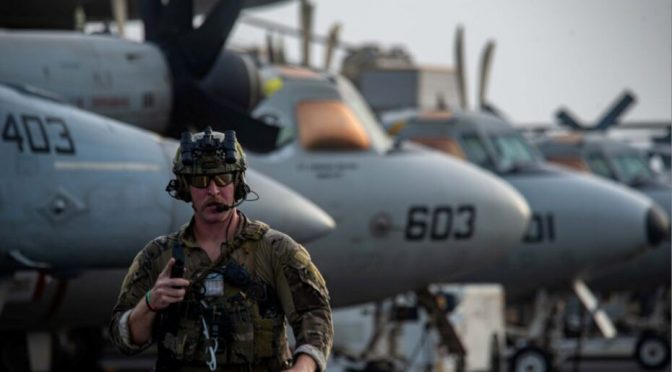 Can an America that off-shored much of its manufacturing capacity to China, for short-term profit, afford the de-coupling?

Washington isn’t quite sure what to do after the chaotic end to America’s ‘forever’ war. Some in Washington bitterly regret exiting from Afghanistan at all, and advocate for an immediate return; some just want to move on – to the China ‘Cold War’, that is.

The cries from the initial Establishment ‘melt down’ and its articulation of pain over the Kabul withdrawal débacle, however, indicates the extent to which the almost obsessive focus on ‘Hobbling China’ nevertheless seems like an humiliating retreat to U.S. hawks, habituated to more global, and unlimited interventions.

It is a retreat. ‘Rome’ is relegating its ‘distant provinces’ to their own devices, and even its abutting loyalist inner circle is being downgraded to ‘benign’ indifference. It is a drawing-in towards the ‘hub’, a ‘circling of wagons’ – the better to muster energies for a lunge out at China.

There are the acquiescent regions that Americans occupied after WW II (the psychologically-seared Japan and Germany), and then there is the American world empire, which exists chimerically wherever U.S. commercial and cultural power reaches, and more practically in its patchwork of client states and military installations. This third empire is regarded by many Americans as its most remarkable achievement – a triumph of the ‘City of Light’.

The post 9/11 era’s final ‘Mad Hatter’s Tea Party’ dénouement scene at Kabul Airport did however, clearly convey a strong end-of-the-Roman Empire feel. Yes, failure in Afghanistan may have taken place far from Rome itself, yet something more profound today hangs in the air: a Change of Era.

And defeats on distant frontiers, can entail profound consequences – closer to the imperial core – as a sense of accelerating imperial decline bleeds into domestic arguments, widening already yawning ideological rifts.

An embedded national consensus can change very slowly, and then, under the right pressure, all at once. And in many subtle and sometimes chaotic ways, that trigger for change came from Trump. No dove or systematiser, he nonetheless made realism and anti-interventionism, quasi-respectable again.

Elbridge Colby, who was in Trump’s Pentagon helping devise its national defence strategy, has a new book, The Strategy of Denial: American Defense in an Age of Great Power Conflict, making the case for a foreign policy that leaves the post-9/11 era clearly and decisively behind. The outer circle of the ‘periphery’ reduces to over-horizon, necro-tech management, and the ‘near provinces of empire’, such as Europe are dismissed as ‘sideshows’ to the main event – China. To focus on Iran or North Korea, he says, is simply misguided.

It is “a realist’s book, laser-focused on China’s bid for mastery in Asia as the 21st century’s most important threat”, Ross Douthat writes in the NY Times. “All other challenges are secondary: Only China threatens American interests in a profound way, through a consolidation of economic power in Asia that imperils our prosperity and a military defeat that could shatter our alliance system. Therefore, American policy should be organized to deny Beijing regional hegemony and deter any military adventurism — first and foremost, through a stronger commitment to defending the island of Taiwan”.

The Strategy of Denial presents a particularly unsentimental version of a rapidly consolidating Washington consensus. Biden’s speech justifying withdrawal from Afghanistan, in terms of an end to nation-building and focus on counter-terrorism – albeit more softly spoken – said the same as Colby.

The contradictions implicit within the 9/11 era’s War on Terror, and coercive westification, may have become only too plain today with 20th anniversary hindsight, but other contradictions within the ‘Hobble China’ pivot are potentially just as fatal to its success – as were the flawed assumptions underlying the 9/11 era zeitgeist.

Its’ most basic contradiction is that far from providing the balm around which Americans can gather and unify, the China pivot is likely only to loosen the glue binding a heterogeneous ‘nation’ increasingly turning in upon itself.

Firstly, the ‘new consensus’ has it that the best way for America to weaken China is to make it ‘the world versus China’ – confronting it with a broad, transnational coalition, based on the value-struggle between democracy and authoritarianism. Yes, but this repeats the error underlying the 9/11 policy – namely by assuming that the rest of the world still admires and aspires to emulate American liberal democracy. Look what occurred in Afghanistan. The world has changed – deference to western values per se has evaporated.

There once was a time when ‘pro-Europeans’ too, were confident that the world would almost inevitably be remade in the image of the West, as it endlessly expanded its rules, and exported its model. Since then, even the Europeans have lost confidence in a world vision, and have become psychotically more defensive (imagining looming ‘threats’ from everywhere and everything). And as the European model has hollowed out, becoming less credible, so too, Europe has and leant into raw mercantilism. The logic of the European situation is clear. It needs China, more than China needs Europe.

It would be a huge ‘stretch’ therefore, for Washington to imagine that ‘the world’ might side with its democratic values against China’s ‘authoritarianism’. Just to remind, U.S. democracy was tarnished in the eyes of the world in light of the 2020 Election. And some 70–80 million Americans share that view too. We saw it nightly on our screens.

Secondly, it assumes that America’s ‘corporate’, capitalist economic system is a tremendous asset in the Cold War against China. Well, it isn’t. China has its economic problems, certainly; but unlike most western states, it is trying to move away from raw neo-liberalism and endless liquidity – as the hammer set to every ‘nail’. China is deliberately turning away from this model’s distortions, sky-high housing and living-costs, huge inequalities, and collateral social damage. It would be an error to underestimate ‘the pull’ of this alt-vision (even for Europeans). China is, itself, a civilisational pole.

Then thirdly, there is the basic contradiction in having a laser-like single focus on ‘Hobble China’, which is brought about only at the expense of feeding Americans’ sense of accelerating imperial decline, bleeding into domestic tensions.

This is Pat Buchanan’s argument in a piece entitled, Who and What Is Tearing the U.S. Apart? He answers:

“After 9/11, Bush invaded Afghanistan and Iraq. President Barack Obama attacked Libya and plunged us into the Syrian and Yemeni civil wars. Thus, over 20 years, we have been responsible for the deaths of hundreds of thousands and driven hundreds of thousands more from their homes and their countries. Are Americans really as oblivious? … Many of these peoples want us out of their countries for the same reason that 18th and 19th-century Americans wanted the French, British and Spanish out of our country and out of our hemisphere”.

“Unlike previous generations, our 21st-century divisions are far broader — not just economic and political, but social, moral, cultural and racial. Abortion, same-sex marriage and transgender rights divide us. Socialism and capitalism divide us. Affirmative action, Black Lives Matter, urban crime, gun violence and critical race theory divide us. Allegations of white privilege and white supremacy, and demands that equality of opportunity give way to equity of rewards, divide us. In the COVID-19 pandemic, the wearing of masks and vaccine mandates divide us”.

“Does the United States even constitute a ‘nation’? In the sense of common descent (the root of “nation” is the Latin nasci, to be born) – clearly not. Widespread fear of such an ethnic sense of American identity drives considerable hostility to the very idea of nationalism. Most American elites prefer words like ‘patriotism’ … The problem with this conception of patriotism is that it is a weak glue. The recent history of the United States offers ample evidence. Rather than objects of agreement – liberty, equality, individual rights, and self-government are instead [today] the objects of discord.

“Here we come to the real glue of America: From the founding of the country in the fires of war, the United States has been an expansionary republican empire ever incorporating new lands, new peoples, new goods, new resources, new ideas. This “empire of liberty,” as Thomas Jefferson called it, knew no limits … Continuous military, commercial, and cultural expansion since Jamestown and Plymouth cultivated the restlessness, vigour, optimism, self-confidence, and love of glory for which Americans have long been known. The glue of America has thus ever been what Niccolò Machiavelli called virtù in service of “a commonwealth for expansion.” Such a republic is always in tumult, yet a tumult that, if well-ordered, finds glory …

“Forward motion thus becomes the lifeblood of such a polity. Without it, the purpose of the civic bonds of unity inevitably come into question. An America that is not a glorious republican empire in motion is not America, full stop. This part of the American mythos Lincoln left unsaid at Gettysburg.

“Since the 1960s, the glory of the American empire of liberty has tarnished. Since the mid-2010s it has fallen under sustained internal attack. The failures of national purpose in Vietnam, Iraq, and Afghanistan are amplified by the failure of globalization to generate common wealth for the commonwealth. If Americans are not united for expansionary republican greatness, what then are all these fissiparous races, creeds, and cultures bound together for? While belief that self-government may perish from the earth without American unity may have been plausible in 1863 or 1941, it is a hard sell in 2021”.

Does this struggle against China make sense? Can America, whose economic and financial system today is highly precarious, afford to bludgeon China into adverse economic straits also? Can an America that off-shored much of its manufacturing capacity to China, for short-term profit, afford the de-coupling?

Do American corporate leaders truly share the view that the (inevitable) consolidation of economic power in Asia imperils American prosperity, and that its consolidation would shatter their imperial outreach, dollar-based order?

Possibly they do. They do fear it.

Alastair Crooke is a former British diplomat, founder and director of the Beirut-based Conflicts Forum.