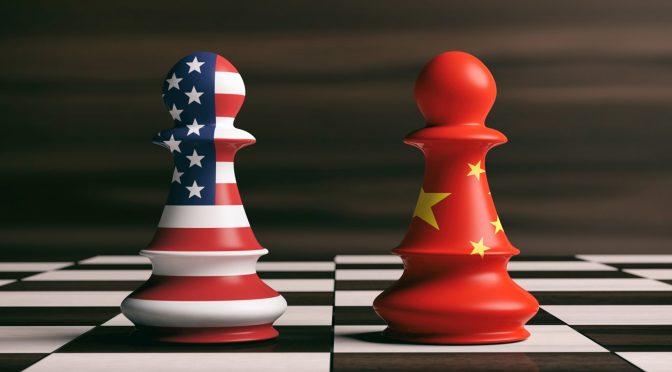 It is frightening how oligarchically-minded figures of a Great Resetting nature wish to use the structures of social credit to modify group behaviour under a post-Truth, depopulated/de-carbonized world order.

Ever since COVID-19 made a crazy world even crazier, many good people have become absorbed into anti-Chinese hysterics all across the Five Eyes-managed parts of the rules-based liberal west.

Every day, new accusations that China is running spy rings, honey pots, Trump’s overthrow, and even the Great Reset itself as part of a larger plot to undermine western democracy are repeated across the conservative press landscape. The two biggest “proofs” of China’s evil heart are:

1) China’s use of social credit that deprives people of freedom (and broader state regulation of the internet and video games), followed by

Frankly, these fears are impotent, unfounded and devoid of any understanding of either basic history or the actual power structures managing the world we all live in.

As I’ve written in countless locations (such as here, here, here, here and here), those same imperial forces that have driven the worst downshifts of human history via wars, assassinations, coups and economic terrorism, are very much alive today and are in fact attempting to steer humanity into a feudal slave model of society (with some technocratic 21st century modifications).

This power structure is not Chinese, nor is it Russian. It isn’t even American, although it demands that all three nations be wiped out, their historic cultures reset and turned into fragmented, depopulated regions of a post-nation state global order.

Thankfully, genuinely nationalist leaders have arisen in this moment of global crisis and have created an alternative pathway into a very different future from the one which misanthropic globalists like George Soros or Klaus Schwab demand exist. UN Secretary General Antonio Guterres complained of this alternative block in a recent speech saying:

“I fear our world is creeping towards two different sets of economic, trade, financial, and technology rules, two divergent approaches in the development of artificial intelligence—and ultimately two different military and geo-political strategies. This is a recipe for trouble. It would be far less predictable and far more dangerous than the Cold War.”

In the course of the following series, I am going to nip some of the virulent anti-China mythologies in the bud by first focusing on synthetic cult creation past and present, the problem of Jesuits, the nature of China’s deep state, color revolutions, and the Chinese debt trap myth.

Social Credit: Not my Cup of Tea but Still a Necessity

Let me just state that on a personal level, speaking as someone who is shaped by democratic western values, all forms of surveillance, and social credit offends me.

I believe that people should cherish freedom and live in a cooperative world of love, trust and democracy.

That said, that world which I hope future generations get to experience bears little resemblance to the world of supranational oligarchism which has taken control of nations dumb enough to step into the globalist cage over the past decades and tie their fate to the Wall Street- City of London run bubble world order.

As I laid out in my recent article ‘Guterres and the Great Reset: How our Economy Became a Time Bomb’, those figures preparing to pull the plug on the bubble known as the western financial system tend to orbit one particular organization called the World Economic Forum, with names such as Klaus Schwab, Henry Kissinger and George Soros.

And while consumers of anti-Chinese propaganda might here exclaim that these individuals have all spoken well of China at different times, the only thing which Schwab, Soros or Kissinger admire is China’s centralized power structures and social credit systems. Everything that China is actually doing as far as building the New Silk Road, unleashing long term credit for development, empowering sovereign nation states to stand on their two feet and ending global poverty are despised.

Power hungry imperialists very much enjoy centralized national controls for the simple reason that these controls would give them the power to make their grandiose visions for a dystopic techno-feudal dictatorship happen fast without pesky democratic mechanisms getting in the way. The difference between China’s leadership when contrasted with the Schwabs of the Great Reset crowd is a matter of intention and governing ideology.

Where one is devoted to closed system depopulation and unipolarism, the other is devoted to open system long term growth and multipolarism.

A Lack of Humility

As hard as it is for some to admit, we who live here among the western trans-Atlantic states have a much more virulent form of social credit and surveillance state now in place under the Five Eyes and the multiheaded hydra which former CIA analyst Ray McGovern has called MICIMATT (Military-Industrial-Congressional-Intelligence-Media-Academia-Think-Tank complex). This is easy to see from a top-down perspective, but for those whose minds are conditioned to make sense of the world “from the bottom up”, it is difficult to see beyond the thick veneer of propaganda (i.e.: just being at a rally on January 6, 2021 has countless people on do not fly lists, un-hirable or in jail).

Bankruptcy (either COVID-lockdown induced or other) results in poisoned credit penalties for many years which is nearly impossible to break out of for most people. In China, on the other hand, you can indeed find your wallet take a hit or job options limited by bad social credit, but inversely you can also recover your standing relatively easily.

Admittedly it frightens me to think how oligarchically-minded figures of a Great Resetting nature wish to use the structures of social credit tied to some form of Universal Basic Income in order to modify group behaviour under a post-Truth, depopulated/de-carbonized world order. But the thing to hold in mind is that mechanisms, like most tools, are generally morally neutral. It is how we use them that imbues them with evil or goodness.

Additionally, China is NOT forcing vaccines on their people while we here in the free west are making life unlivable if you don’t get the jab. Recently, Canadians have lost the right to fly, sit on a train or cross a border to the USA without (at least) two mRNA jabs. Millions are threatened with a loss of livelihood if they don’t subject themselves as guinea pigs in a vast gene therapy experiment which is still in clinical stages and carrying a remarkably high rate of adverse events including death. Chinese and Russian federal governments on the other hand have intervened on municipal/provincial administrators who have tried making the jab mandatory at different times and both nations have resisted pressure to use mRNA gene therapy relying instead on conventional viral vector technology.

Contrast this with the western nations, where our federal governments have demonstrated themselves to be little more than active appendages of the Great Resetting sociopaths with the only serious efforts at resistance coming from various state or provincial representatives.

In case this exercise in humility is still meeting resistance, it is worth being reminded that here in the freedom-loving liberal democracies of Canada, the USA and UK, jailed whistleblowers deprived of trial, or even basic civil liberties has become a normalized fact of life. When former CIA analyst John Kiriakou spoke out against his government’s use of illegal torture, he was put in prison. When Chelsea Manning exposed murderous drone assassinations of civilians committed by the US military, she found herself quickly jailed. When US Air force analyst Daniel Hale leaked information about the murder of innocent civilians, he paid the price with a 4 year prison sentence. Meanwhile Julian Assange rots in jail and Snowden would be in jail if he hadn’t found sanctuary in Russia.

In the next installments, we will tackle the important issue of asymmetrical warfare which has been deployed to divide and conquer China from within over the past 200 years. This will include an exposition of deep state operations within China, the use of religious organizations as fronts for color revolutionary tactics, and Soros-affiliated NGOs promoting regime change across Hong Kong, Tibet and Xinjiang.