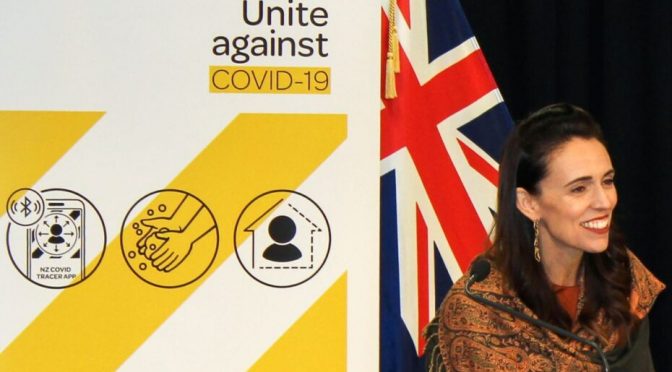 The tragic state of affairs, justified by a disease with a better than 99 percent survival rate, cannot continue indefinitely.

Even as scientific studies show that vaccines alone cannot extricate humanity from the Covid-19 crisis, governments are rushing headlong towards the creation of a ‘vaccinated economy’ without any consideration for the consequences. It’s time for an injection of sanity and informed democratic debate.

An astonishing thing happened this week that should have – were it not for a media industrial complex that coddles and cossets the powers that be – incited journalists to scream bloody murder around our increasingly imprisoned planet. What the world got instead was the deafening cacophony of crickets.

When a reporter asked New Zealand Prime Minister Jacinda Ardern about the possibility of the Pacific island nation being fragmented into two distinct classes of citizens – the vaccinated and unvaccinated – Arden didn’t miss a beat as she responded with her trademark Cheshire grin, “That is what it is. So yep. Yep.”

Under normal conditions – that is, before scientific inquiry was sent back kicking and screaming to the Dark Ages – Ardern’s outrageous remark would have been greeted by robust and vigorous debate from both the political and medical communities. After all, the vaccinated should feel absolutely at ease mingling among the unvaccinated in stuffy public places given that they are, supposedly, protected? Isn’t that the point of the vaccines, to protect the vaccinated and get us back to some semblance of ‘normal’? If not, then why the incessant push to jab every single person on the planet, and not just once, as initially promised, but multiple times? The answer, at least according to Queen Ardern, is so that everyone can feel “confident” once again among their fellow man. That makes absolutely zero sense, especially as new studies show no discernible decrease in infection rates among the vaccinated. So why hedge our bets when just the opposite seems to be happening?

On the brink of losing my job, can't travel, can't eat out, can't stay in a hotel, can't go to the gym, can't go in any shops except supermarkets (for now), family tell me they're not willing to see me for fear of breaking the "rules"…………

Is this "life" from now on?

In a recent study by Harvard researchers, published in the European Journal of Epidemiology, it was discovered that, looking at statistics around the world, “there appears to be no discernable relationship between percentage of population fully vaccinated and new COVID-19 cases…” The researchers then delivered a brutal body slam to conventional (political) thinking by revealing that “the trend line suggests a marginally positive association such that countries with higher percentage of population fully vaccinated have HIGHER (emphasis added) COVID-19 cases per 1 million people.”

That is a truly shocking discovery, and one that deserves a serious public debate now that a mandatory vaccination regime – replete with the loss of jobs and lives – is being bolted down across much of the globe. But instead of addressing the health crisis with a modicum of restraint and humility, many politicians are gleefully capitalizing on the pandemic, using it as an opportunity to accumulate ever greater political power. This disturbing trend is happening across much of the Western hemisphere where, in what must be one of the greatest coincidences of modern times, a coterie of like-minded liberal leaders hold the destiny of mankind in their very hands. This cannot be considered a good thing by any stretch of the imagination. Although these individuals may owe no special favors to the pharmaceutical industry, their collective actions – denying the unvaccinated the same inherent rights to liberty and freedom as other citizens, including the corporate variety  – do not support such a premise.

So how to explain this unprecedented power grab happening around the world? Best to examine the unmatched power of the media that promotes the message of Covid authoritarians, like Jacinda Ardern, and their unflinching devotion to a fragmented apartheid state. All in the name of health, of course.

Noam Chomsky says the "right response" to The Unvaccinated is "to insist that they be isolated" from society https://t.co/T34V7anDGI pic.twitter.com/1bBzURPeEi

Political commentator Chantelle Baker told Sky News Australia that Ardern enjoys practically “full control” of the narrative in New Zealand because the government has paid “hundreds of millions” to the media. Now, in return, the citizens are stuck with compromised journalists who will “only push for promotion of Jacinda and…her ideological ideas.”

Around the globe, in another power-grabbing liberal hotspot, Canadian Prime Minister Justin Trudeau also enjoys no small amount of mainstream media support. In its 2019 budget, the federal government lavished select media outlets to the tune of $600 million in subsidies, the overwhelming bulk of the largesse going to left-leaning publications, of course.

“Trudeau’s media bailout will not save the newspaper business,” warned Derek Fildebrandt, publisher of the Western Standard, one of the last free and independent media voices in Canada. “It will put it in a complacent, comatose state on life support, fearful that if it acts against its master, that the plug could be pulled at any time.”

The power to declare pandemic rule will shift to the Premier under laws designed to replace Victoria's State of Emergency.

Fines of up to $90,000 or two years jail await those breaking the rules, which Daniel Andrews described as a win for accountability. @msanto92 #9News pic.twitter.com/TYz1t2hUN8

South of the border, in the United States of Submission, the liberal-dominated media is almost 100 percent aligned behind Joe Biden and his mandatory vaccine regime. The media whitewashing of the subject comes even as several states, including Texas, Florida and Arizona have drawn a line in the sand, allowing their citizens loopholes from which to escape the wildly draconian, ‘vaccinate-or-vacate’ your job stance.

Returning to the Pacific basin, in Australia, where new cases of Covid have decreased to a trickle, Victoria Premier Daniel Andrews is snorting heavily from the absolute power stash, attempting to ram home a bill that would empower him to pronounce, like any degenerate Caesar, any and all future pandemics and the necessary emergency provisions.

In a delightful document entitled the Roadmap – which comes off a bit like a Mad Max sequel – Andrews, who apparently moonlights as a PhD when he’s not pretending to be a leader, postulates that “there will come a time when Victorians who choose not to get vaccinated will be left behind…” as Australians begin “transitioning to a ‘vaccinated economy’ in this state, and ensure we have the right systems in place.”

Those are some truly disturbing words, and ones that few people would expect to be tossed around blithely by a western leader in the 21st century. In fact, they fly in the face of democratic theory to the point where the question of abuse of powers cannot be discounted. I suspect this is the real reason why the ‘progressive’ radicals now working overtime in the U.S. to fracture societies around the planet are the same people who wish to eliminate Thomas Jefferson from the annals of American history, starting with stone depictions of his existence.

Jefferson, in the second paragraph of the Declaration of Independence, which he authored, famously states: “We hold these truths to be self-evident, that all men are created equal, that they are endowed by their Creator with certain unalienable Rights, that among these are Life, Liberty and the pursuit of Happiness.”

Across the so-called Five Eyes alliance, comprised of the U.S., UK, Australia, Canada and New Zealand, a homegrown tyranny based on a creeping medical apartheid is threatening the “life, liberty and pursuit of Happiness” worse than all of history’s former tyrants combined. Covid-19 did not create the unbearable conditions for which millions of people from Auckland to Alaska are now suffering; what created our current crisis is the reckless response to Covid-19, which increasingly appears to be based not on medical science, but rather raw political opportunism. This tragic state of affairs, justified by a disease with a better than 99 percent survival rate, cannot continue indefinitely. In fact, it needs to end immediately.