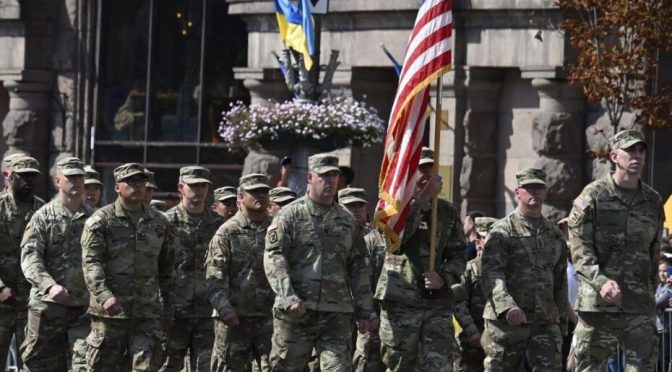 The rules-based liberal order was always, in part, an illusion – albeit one that gripped much of the world, for a period of time.

George Kennan’s famous 1946 ‘long telegram’ from Moscow was primarily a piercing analysis of the inherent structural contradictions within the Soviet model, leading to its analytical conclusion that the USSR would ultimately collapse under the weight of its own flaws. That was written just over seventy years ago.

Others have tried their hand: Just four weeks after the Biden inauguration, ‘The Longer Telegram’ – an essay written by an anonymous former senior government official, advocating for a new American China strategy – was published to great accolade. Kennan’s original, however, was a profound appraisal of how the Soviet Union functioned (or didn’t), and from which had flowed Kennan’s prediction that ultimately the Soviet system would implode. It was enough to have patience.

This contemporary Longer Telegram however, is an imposter posing as a profound appraisal – in the Kennan mode – whereas in reality, it is a stale repetition of the mainstream U.S. interventionist playbook, albeit one targeting China (as opposed to Iran, though its methodology is the same). It misleadingly has been sold under a ‘Kennan’ label. It makes the case how to engineer implosion: Action, in lieu of patience. It is unlikely that history will treat this recent telegram kindly.

Nevertheless, profound structural contradictions threatening systemic dissolution abound – and are a cause of severe anxiety to many today, who wonder how the future all will unfold, and query whether they will somehow survive as structural dynamics grind noisily away, generating overheated politics.

In a sense, though, were we to knit together President Putin’s recent Valdai speech with comments from Sergei Lavrov and President Xi, we might see that we have before us a discursive ‘Longest Telegram‘ that points to the internal contradictions inherent within western cultural and economic structures.

These were cultural and ideological processes of a similar genre, which Putin underlined, had afflicted Russia in 1917 and 1920s – at huge human cost. All systems, transfixed by the certainty of a particular illusion, have their contradictions. The question is will they collapse the whole ‘sandpile’, and bring it cascading down. President Putin was speaking from experience – bitter experience.

Look first at the obvious inherent contradictions with the American ‘face’ as presented to the world today: Team Biden (as well as many others) desperately wants a climate achievement; John Kerry tells him frankly that that any climate accord must depend on Chinese co-operation. China is just too big to be left out. Jake Sullivan (and the China hawks) however, tell Biden that the moral-cultural agenda – human rights; treatment of Uyghurs; Hong Kong, Tibet, and above all, Taiwan – are issues that cannot be traded Chamberlain-like for a ‘piece of paper’ promising carbon net-zero in our lifetimes.

The latter worry that Biden will ‘give away’ their pressure points – their tools of attrition – by which they hope to preserve U.S. primacy over China, for the sake of hollow climate promises from Beijing.

So the contradiction becomes more manifest: On the one hand, ‘China hawks’ accelerate eating away, piece by piece, the ‘One China’ commitment, and egg-on Taipei to think that the U.S. ‘has its back’, were China to attempt any reunion by military force.

But maybe by using this strategy, Taiwan’s leaders will come to believe that America does have its back. Maybe there are even moments when Biden does believe in having their back too; or thinks America should have Taiwan’s back. Why not? Taiwan ‘shares American values’, his Administration says. It’s not clear. Interestingly, some in his progressive caucus are pressing for ‘war powers’ for Biden over Taiwan, at the same time as being the loudest insisting for radical climate policies.

On the other hand, the Chinese think it a fantasy for the U.S. to believe that it could repulse a Chinese invasion, were that to result. Effectively, the U.S. is writing dud cheques, i.e. Biden is bluffing, they probably think. China will be patient, up to the point when Taiwan declares its ‘independence’.

This dud cheque approach is also apparent in the case of Ukraine: The Biden Administration says the door to NATO membership is open to Ukraine. The EU in a more mealy-mouthed way hints that the door to EU membership is ‘sort of’ open, too. Two more bounced cheques.

But here, Kiev smells a rat: It suspects they are lying, and is desperate. Its’ economic situation is beyond dire. The water in the pan is starting to boil. Maybe it then comes to believe – given all these cheques ostensibly made out to Kiev as payee – that ‘a frog’ must jump from the pan, before it gets boiled – hoping that an assault on the Donbass will force the hand of western support, and make good on their otherwise dud cheques.

So again, the structural contradiction is evident. The West contrives to use Ukraine as the peg by which to threaten Russia with NATO, yet there is no way that Donbass can be seized back by Kiev (Moscow will not allow it; and NATO knows it cannot prevail).

The point is that either Ukraine remains as status quo, and disintegrates from its own economic and political contradictions (‘gets boiled’), or it goes for broke versus the Donbass forces, and ends as a state dismembered. It will end with Ukraine and Europe weakened – either way.

That contradiction is clear; yet another is that Brussels seems to have come to believe that its’ (and NATO’s) empty threats carry some weight in Moscow; that Putin will eventually bail-out Kiev (which is why the EU continually pleads for a Normandy format summit).

Moscow, however, has now come to view Brussels with complete disdain. It will view it as bluff, and reason that – in the end – the U.S. having issued all these dud cheques will dump the resulting mess on the European doorstep. In a word, it will only deepen the contempt in which the Russian leadership views the EU establishment.

This is contradiction on a par with the EU’s desperate need and dependency on Russia for gas in order to keep warm this coming winter; yet at the same time, it never misses the opportunity to revile its principal supplier.

Then – on to the next most explicit contradiction – Iran: Biden apparently wanted Iran back, contained in the JCPOA ‘box’, but was loath to pay the price. He wanted to keep the price cheap, so that he could hold back enough ‘pressure’ in order to coerce Iran to accept a ‘stronger and longer’ ‘Mark Two’ JCPOA, which would additionally include Iran’s missile defence system, and its network links to regional allies.

Again, Team Biden talks of ‘other options’: a Plan ‘B’ being in the works, should Iran not return to full JCPOA compliance. Even Israelis understand that the U.S. is not going to war with Iran. It is bluff.

In fact, it was a senior Israeli military commentator who has said explicitly that Israel sits in a pan of slowly heating water (a reference to how Iran has surrounded Israel with smart missiles), but no Israeli political leader will make the decision to jump from the pan, before the frog is boiled dead, for fear that would be simply to jump into the fire that heats the pan.

What’s with this series of not very credible bluffs? They come against the background of America’s own structural difficulties, ranging from an energy-crunch; to accelerating inflation; to the migration out from the labour force; from supply line outages; empty shelves; food shortages; key raw material and chip deficiencies; jammed container ports; vaccine mandate tensions and resignations; stuck legislative programmes, and the contradiction of a financialised real economy built around low interest rates, versus the inevitability of their coming hike. In short, the water in the pan is becoming very hot.

And here is the underlying contradiction – one highlighted by Pat Buchanan: “Unlike previous generations, our 21st-century divisions are far broader — not just economic and political, but social, moral, cultural and racial. Abortion, same-sex marriage and transgender rights divide us. Socialism and capitalism divide us. Affirmative action, Black Lives Matter, urban crime, gun violence and critical race theory divide us. Allegations of white privilege and white supremacy, and demands that equality of opportunity give way to equity of rewards, divide us. In the Covid pandemic, the wearing of masks and vaccine mandates divide us”.

This point by Buchanan goes to the heart of Russia and China’s discursive ‘Telegram’: The West has configured its ambition for global primacy precisely around one particular rendering of its own social, moral, cultural and racial faultlines which are being used to underwrite global values.

President Putin speaking at Valdai however, said: ‘We’ll go with you on environmental damage and climate (‘those are undoubtedly real’), but we will not accept your ideological moral-cultural agendas’; we have been there, done that, and we saw the consequences in 1917. Xi says similar: Stay out of it.

This rejection effectively guts the globalist agenda. It denies that issues such as identity rights in Afghanistan should be the very stuff of international politics, or a point of coercion on the Afghans (they should be addressed in different way). It takes politics back to the sovereign state. Putin said: Look what happened when the Covid crisis struck: It was every state for itself – that’s the reality.

This points to the meta-contradiction within the attempt to forge a universal worldview, through an imagined alternate reality (as the Bolsheviks had sought). The rules-based liberal order was always, in part, an illusion – albeit one that gripped much of the world, for a period of time. Power everywhere was more important than rules, but the illusion still maintained its’ slowly-eroding aura of stability, until power moved elsewhere. And that shift has now occurred.

Perhaps this is culturally too difficult for the western Establishment to bear. All this bluffing may be to distract. The danger however, is if some U.S. élites should come to believe their own bluffs. The water in the pan is reaching boiling. Maybe the frog is already too zombified, too enervated by the heat, to jump – and, if it should try, may find it has not the energy and vitality remaining to clear the fires below – potentially those of Taiwan, Iran or the Ukraine.

Alastair Crooke is a former British diplomat, founder and director of the Beirut-based Conflicts Forum.