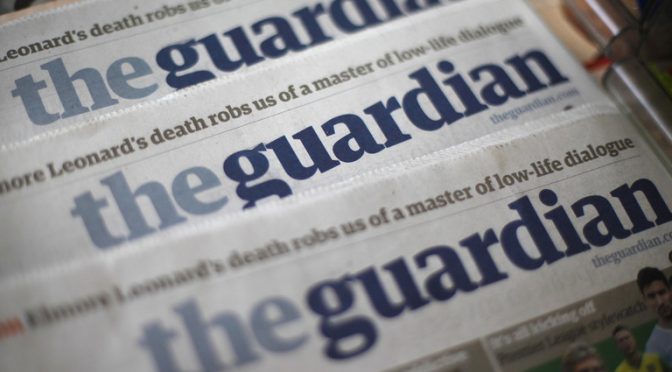 It likes to tap its readers for donations by claiming it’s funded by them, not the mega-wealthy. But, in reality, billionaires have forked out millions to support the UK’s premier right-on, left-of-centre newspaper.

If you want to know what the ‘woke’ set are thinking – on issues from climate change to trans rights – The Guardian’s the newspaper to read. While its print sales have been in decline, falling over the past decade from 248,775 a day to 105,134 in July this year, The Guardian is one of the most visited news websites in the world.

The trouble is it keeps losing money. Four months ago, it was reported that the Guardian Media Group, which also owns The Observer, a closely related Sunday broadsheet, had lost over £10 million in the previous financial year, although that was still an improvement on the £17 million loss the year before. The Guardian doesn’t have a paywall in the same way as other newspapers, but does employ what computer types used to call ‘nagware’, constantly prompting users to sign up or to make donations.

However, it has made one rather spurious claim on social media in support of this strategy: “We’re not funded by billionaires. Our readers’ backing gives us the independence to hold the powerful to account – and we’re just getting started.”

We're not funded by billionaires. Our readers' backing gives us the independence to hold the powerful to account – and we're just getting started. #Guardian200

Readers have certainly been generous. According to a Guardian story last year: “The Guardian now has more than one million subscribers and regular contributors, after support from online readers grew by 43% in a year. … When one-off contributions are factored in, more than 1.5 million people have supported the Guardian in the past year.” A million subscribers at £5.99 per month would bring in about £6 million. That’s handy, but doesn’t even cover the paper’s losses, never mind its overall running costs.

However, as climate commentator Ben Pile has noted, billionaires love The Guardian and are very happy to put their hand in their pocket to support its projects. For example, according to US outlet MintPress News, a thorough sift through donations from the Bill & Melinda Gates Foundation shows The Guardian has received a cool $12,951,391 in support. In fact, Gates and his now ex-wife have sprayed hundreds of millions of dollars across the media landscape to support the kind of journalism they approve of.

But the Gateses aren’t the only billionaires supporting The Guardian. A quick look at its website’s philanthropy section shows that Aussie billionaire Judith Neilson’s institute funds The Guardian Australia’s Pacific Project. The Open Society Foundations, created by Hungarian billionaire George Soros, have backed Guardian projects on America’s environmental inequalities and on transforming care using AI. The David and Lucile Packard Foundation, set up by the late co-founder of Hewlett-Packard in the 1960s, supported its work on the state of the oceans.

So the claim that The Guardian isn’t funded by billionaires seems rather dubious. It’s true that the Guardian Media Group is owned by the Scott Trust rather than by some self-serving media magnate. But the implication of its pitch to readers to cough up money is that anyone who is funded by the super-rich is owned by them, rather than the more reasonable assumption that organisations will seek funding to engage in endeavours such as specialist journalism that aren’t easily funded through other means. Indeed, Guardian writers have been quick to launch ad hominem follow-the-money attacks on other outlets when other journalists write things that aren’t simpatico with The Guardian’s worldview.

In an essay last year for the paper, Paul Vallely quite reasonably pointed to the tensions that come with billionaire philanthropy. “A lot of elite philanthropy is about elite causes. Rather than making the world a better place, it largely reinforces the world as it is. Philanthropy very often favours the rich – and no one holds philanthropists to account for it.” The World Health Organization, which made such a mess of tackling Covid-19, is now heavily funded by philanthropists such as Gates and media magnate Michael Bloomberg, skewing its priorities.

It’s no surprise that environmentalism is a favoured target for billionaire donations. There is no more elite project than telling the rest of us how we should live our lives. As the famous personages flying in and out of Glasgow for COP26 on private planes demonstrated, the wealthy love to demand action on climate change from the rest of us while continuing to live their gilded lives uninterrupted.

Both the press and public policy are too often skewed by the interests of the mega-rich. Media outlets, journalists, arts organisations and charities have long had to make pragmatic decisions about funding in order to do their work. It’s up to the rest of us to make our minds up about what we see and read. What sticks in the throat is The Guardian’s holier-than-thou attitude and misleading sales pitch to readers.

Even worse is the fact the UK’s most right-on newspaper when it comes to climate change has survived thanks to the buying and selling of cars. The enormous losses of the Guardian Media Group have been sustained by flogging its stake in used-car website Auto Trader back in 2014, making “between £600 million and £700 million” on the deal.

Perhaps The Guardian needs to save us the lectures and learn that famous lesson from the New Testament: “Why do you look at the speck of sawdust in your brother’s eye and pay no attention to the plank in your own eye?”

Rob Lyons is a UK journalist specialising in science, environmental and health issues. He is the author of ‘Panic on a Plate: How Society Developed an Eating Disorder’.