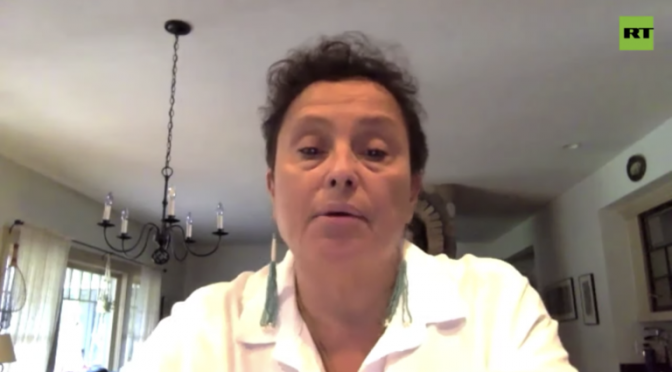 It’s unlikely the Pilgrims would have survived without the help of the Wampanoag in 1621. Now one ancestor of the Indigenous tribe tells RT of her regret at the assistance given, and of the problems her people continue to face.

Paula Peters has a message she wants to send to every American ahead of November 25, the 400-year anniversary of Thanksgiving: “We are still here and we are still Wampanoag.”

Peters is a proud Wampanoag woman. The American Indian community was once thought to number up to 100,000 people and owned land from southern Massachusetts to Rhode Island. Now the numbers are significantly smaller, with the community centred around its ancestral home in Mashpee in Massachusetts, some 30 miles or so from Plymouth Bay, where the Pilgrims originally landed.

It was Peters’ ancestors who showed the Pilgrims how to survive in the New World. Without the Wampanoag’s knowledge, assistance and skills, they would have perished. But for Peters and other Wampanoag, there are serious regrets about the decision made by their forefathers – and principally the tribe’s leader Ousamequin – to form an alliance with those who arrived on the Mayflower.

She told RT, “Hindsight being what it is, of course I would tell Ousamequin to rethink that whole idea of allowing them to stay, because he had no idea, I’m sure, that within 10 years this group of a few dozen would have multiplied to more than 30,000. That just could not have been imagined at the time.”

To fully understand the depth of feeling, it’s important to note that the Wampanoag will not celebrate Thanksgiving. Instead they will mark a National Day of Mourning. Because once the Pilgrims were able to survive and prosper, the stripping of Indigenous rights – which continues today – began.

One key detail that has been lost in the modern-day Thanksgiving story is that the Wampanoag were never supposed to be at that infamous original feast, which was held to celebrate the Pilgrims’ first successful harvest.

“The holiday of Thanksgiving perpetuates an awful lot of myths and untruths about that time period,” explained Peters. “It was a misunderstanding that brought the Wampanoag warriors to actually attend the harvest feast of the Pilgrims – as while they had learned from the Wampanoag how to plant, fish and survive in the New World, essentially they would have probably all died had they not got assistance. But there hadn’t been a planned harvest feast to be shared with the Indians. They had gathered together on their own to celebrate their harvest and some of their men in their celebration were blasting off their muskets.”

The commotion led Ousamequin to investigate along with 100 of his men. Once they arrived, the misunderstanding was cleared up and the tribe stayed. Peters continued, “The Wampanoag men did go hunt for some deer, and also brought back what is described as fowl; we don’t know if it was turkey but it might have been. They ended up staying for three days to have this feast. The holiday as it has evolved has really revolved around the myth of Thanksgiving, that there was this ‘kumbaya’ moment when the Indians and the Pilgrims were all coming together and celebrating this harvest, when in fact it never really happened that way.”

Indeed, Peters has been dogged by myths about her community for her entire life. She recalls at school how a teacher replied, “they all died” to a question about where the Indigenous people are now. Peters bravely challenged that, but it’s been a constant effort to correct inaccurate perceptions.

She said, “It’s hard as a seven-year-old to confront your school teacher, I did the best I could. Ever since then I’ve been trying to reinforce the idea that we are still here and that our history matters.”

“We’re constantly being challenged on our issues and tribal rights for sovereignty. I’m 60-something years old now and all my life the tribal leadership has had to fight or negotiate with our government for basic rights that have been promised to us forever, and I don’t think that’s ever going to change.”

One glaring omission from the mainstream narrative that bothers the Wampanoag is the duplicity on the part of the Pilgrims. They were escaping an injustice in England, but in true colonial style, applied that same injustice themselves.

Peters said, “These colonials came in from another country and brought with them the rule of the crown, and these were the very people they were trying to escape from.”

“The separatists left England because the laws were unfair to them and they couldn’t worship in a way that they thought they ought to be able to worship. Yet they came here, to the New World, and denied that right to the Indigenous people and brought along that very system of justice, or injustice as it may be.”

Things became so ugly that eventually it was a crime punishable by death to teach an Indigenous person to read or write. Many were forced to convert to Christianity and children were even taken to government boarding schools that used the motto “Kill the Indian, and Save the Man.”

That’s on top of ultimately losing so much of their land and being forced into subservience. But the ultimate irony centres around Squanto, an Indigenous man captured and sold as a slave as a part of a group in 1614 (six years before the Mayflower landed). He ended up in England for five years and learned the language before coming home to his village, Patuxet, now known as Plymouth.

However, he found everybody he had known was dead. Peters explained, “After they [the captured men] were taken away, within a couple of years a plague infested the people of New England – the Indigenous people from Maine to the tip of Cape Cod, [and] tens of thousands of them died.”

So when the Mayflower carrying the Pilgrims arrived at Patuxet, their lifeline was a former slave who was able to communicate with them. Peters added, “When [the Pilgrims on] the Mayflower arrived to establish their village, they noticed the land was oddly cleared and ready for habitation, but what they found was a virtual graveyard. The people had died so quickly that they couldn’t even bury the dead. There were dead bodies laying on the ground, the gardens had all gone fallow, their homes were all blown to the wind.”

“They arrived at the graveyard of what would have been Squanto’s family – and Squanto became the emissary that helped them to survive there. It’s a pretty huge irony.”

While the Wampanoag’s decisions turned out to be to their ultimate detriment, what was the motivation behind them? One was to defend their land. The plague had killed so many, Ousamequin was concerned about rival tribes encroaching on Wampanoag land as they perceived them to be weak. So, agreeing to an alliance with the Pilgrims was a good move militarily.

Yet in another twist of fate, his decision to try to protect the land put it under even more threat. And that remains a major issue today, some 400 years later.

Peters lives in Mashpee, and she explained, “I am fortunate to live [in] Mashpee. It’s a community that was established for us in the 1600s as a place we could settle and remain. That has been challenged ever since.”

“It’s very expensive to live where I live, so we’ve tried to establish tribal housing and set aside land so our tribal people can remain in our ancestral homeland. Land is so important and being here is so important to being Wampanoag. It is very, very difficult for young people to remain here because of jobs. They can’t make enough money to stay here.”

One problem is the kind of affluent homeowners Mashpee attracts. “It’s kind of a resort, summer living community for a lot of people – the homes are very, very expensive. We sort of get pushed out by the prices of the cost of living here.”

To give context, the average house price in America is estimated at $356,700, but in Mashpee the average selling price is $754,000. At the time of writing, there are properties on sale with price tags as high as $8.9 million and $4.6 million.

The attitude of those who have holiday homes or come from outside to buy expensive properties varies. Peters said, “You have some people who think we should just ‘get over it’ and others that understand it is important for us to remain here and that as a culture we provide value to the community. Some people are just ignorant.” And her thoughts on these individuals? “You can’t change people like that, they are going to believe what they are going to believe.”

On November 25, millions of Americans will enjoy their usual roast turkey. Many will watch the famous New York City Thanksgiving Parade and then the popular round of NFL games. But what will the Wampanoag do?

“There are gatherings held across the country by tribal groups and organisations to honour what is the National Day of Mourning,” said Peters. “It’s a time to recognise the sacrifices of our ancestors and also that there are still cultural injustices taking place, and to look at what’s going on in contemporary times.”

“Whether it be pipelines invading tribal territories or environmental issues, our lands still continue to be infringed upon by outside entities. There are protests, too – there is one held every year at Plymouth at the top of Cole’s Hill, where there is a statue of the Massasoit, who was the leader who originally made the treaty with the English.”

“That’s a place where many Indigenous people will gather on Thanksgiving Day. Personally, I spend that time in prayer in the morning – it’s a sacred time to honour the sacrifices of my ancestors. But I also gather with my family and that’s a more personal decision.”

So while non-Indigenous Americans will be celebrating on Thanksgiving, the tribal people choose to honour the bonds that bind them. As Peters reflected, “We do gather together – it’s just not without recognising what was lost.”

Chris Sweeney is an author and columnist who has written for newspapers such as The Times, Daily Express, The Sun and the Daily Record, along with several international-selling magazines. Follow him on Twitter @Writes_Sweeney