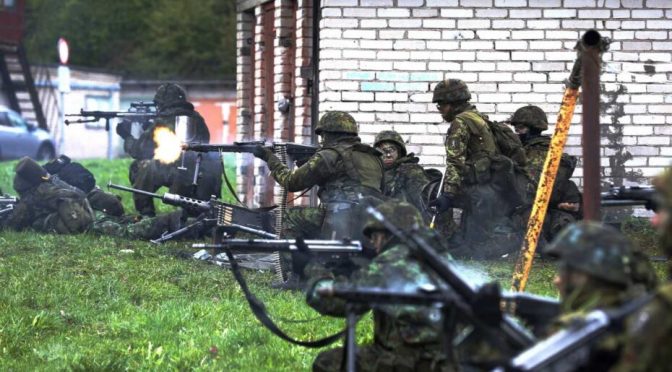 A sort-of EU army is in the making, or at least on paper in Brussels. It’s radical in that it would probably not involve Germany so therefore leaving France at the helm. But who’s going to pay for it?

At the end of November, a draft proposal which sketched out a plan for an EU army entered the sphincter of the EU’s decision-making process, which, strangely didn’t cause much of a stir. Opaque and lacking concrete answers for major questions which have plagued the EU army idea for decades, the paper is both controversial and interesting.

Former Finnish Prime Minister Alexander Stubb believes that Brussels’ renewed enthusiasm for security is “timely, important and realistic. The U.S. is not going to back up European security forever.”

If this is an accurate appraisal of the situation, then one could attribute the move as one born from Biden’s Afghanistan blunder which angered many EU leaders. And yet, Stub’s follow-up comment is alarming as it outlines that there is a worrying level of universal paranoia which goes beyond merely rogue states (which the EU failed to influence in any way, regardless such as Syria).

He says that if Europe is to get serious about protecting itself “it needs to understand that the line between war and peace is blurred … soft power has been weaponized and become hard power. We see that with asylum-seekers being used as weapons. We see with information, trade, energy and vaccines being used as weapons.”

And so the EU feels that its under fire on all levels, from all sides and needs a quick fix. The recent events which have unfolded on the Belarus-Polish border, combined with Russia’s troop build-up and Ukraine’s panicky beliefs that Putin will invade, the EU sees itself as useless, ineffective and doesn’t see its relations with NATO as solid enough that the defence organisation can be put to any good use to calm the tensions.

Much worse for the EU is when individual, old Europe countries step forward and offer to send troops to the region while Brussels frets over the implications of Georgia or Moldovia joining NATO one day. It’s very much about “be careful what you wish for” but in the case of the EU, its latest plan is really more of a political ruse to send a message to both EU member states and to NATO that “something has to be done” in Ukraine and Belarus to tip the scales away from Putin and more towards the West.

But it isn’t going to happen. NATO may well support Ukraine’s so-called sovereignty but it also provokes Putin towards a military option.

What may well emerge from the EU paper is that France takes the lead role for an informal EU army, with a few member states joining, perhaps even the UK, which will used to police the edge of Europe’s borders but not for anything remotely looking like a confrontation with Russia.

The numbers are just not there and there is too much anxiety from some EU member states who fret that NATO will be side lined if such an organisation ever got off the ground while others are more gung-ho but no one has the faintest idea how this plan would be funded.

The paper suggests bigger budget which gives the reader the confirmation that whoever wrote it, is living in cloud cuckoo land and doesn’t have a realistic grasp of the political dynamics on a member state level. No one wants to pay more money into the EU pot as this “we don’t know how to fix it but let’s try more money” typical Brussels way of thinking has lost its credibility.

Military spending on any level is hugely expensive. If the authors of such a paper haven’t worked out how to fund such a military outfit, let alone who would run it (not the EU itself), then we can assume that like a lot of papers which work their way through the debating chambers in the windowless corridors of the EU, there’s still a lot of work required to move beyond the ubiquitous agreement that everyone’s pissed off with Russia.

But none of us have the first clue as to what to do about it. And even if the solution was a military one, how do you do that on a shoestring budget which just pays for the shiny business cards and the exclusive address in Brussels.

If we look at the EU’s diplomatic corps – a farcical organisation which spends over a billion dollars a year funding over 120 “ambassadors” which fails stupendously to fly the EU flag around the world – then we have a clue as to what any such army might achieve. Expect much more chaff from the EU talk machine. But don’t hold your breath if you are expecting EU armbands on the arms of soldiers heading East. That’s just the stuff dreams are made of.

Martin Jay is an award-winning British journalist based in Morocco where he is a correspondent for The Daily Mail (UK) who previously reported on the Arab Spring there for CNN, as well as Euronews. From 2012 to 2019 he was based in Beirut where he worked for a number of international media titles.