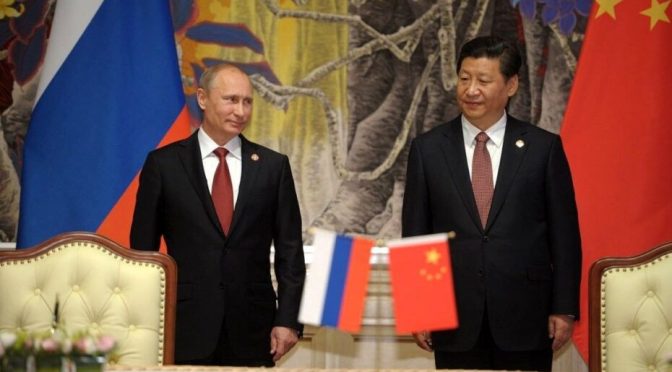 They are certainly positive and can be like a breath of fresh air compared to the eternal stench from the swamp Washington has been sinking into.

The long-term leaders of China and Russia recently had a teleconference in which they gave each other somewhat formal but clear addresses about their pleasure with the way Sino-Russian relations have been going in the past two decades. We shouldn’t be surprised that face-to-face (in the digital sense) two politicians had lovely things to say about each other.

In fact, every U.S. President that ever met Putin seemed to have nothing but shining and positive things to say about all these meetings/calls and yet these positive vibes certainly never transferred over to U.S.-Russian relations.

So, the fact that Xi and Putin had a mutual admiration and respect session is not very meaningful, but one quote that came from it is really food for thought and something we should take note of. The Russian President said that their relations with Beijing are “the best in history“. At first this sounded hyperbolic and just a mere platitude, but when you stop to think about it, this statement may actually be completely true.

It is also important to take note of another key quote from this praise party, that provides a lot of context as to why Putin is so thrilled with the level of positive interaction with the Chinese.

“a new model of cooperation has been formed between our nations, based, among other things, on foundations such as non-interference in internal affairs and respect for each other’s interests and a determination to turn the common border into a belt of eternal peace and good neighborliness.”

Models of behavior are extremely important on all levels of society, from raising children all the way up to International Relations. I myself have been personally very critical of Russia’s general lack of understanding that models are very important when you want to make change.

Russians are proud of and promote the Conservative and Traditional Values of their nation that no one can really define, or present any models of behavior for. This is extremely frustrating but it is a topic best left for another day. But in that context, it cannot be ignored that the idea of a “Multipolar World” has up until this moment really lacked a model.

Some of the critics to Russia’s biggest idea for the 21st century, argued that a Multipolar World would just take us back to the 1800’s where competing empires fought for every far-flung square foot of territory, leading the world naively into WWI. The Russian reaction to this core criticism has been a lot of silence or using the classic schoolyard logic of “no it won’t”.

But now, with Russia on the rise and China skyrocketing to rival the United States we can see that the interaction between these two great civilizations, that do border each other and have potential areas for conflicts of interest, is the model by which a Multipolar World will operate. This is even better than a hypothetical model as it is real and can be felt from within the territory of the Russian Federation for sure.

One key factor as to why the Sino-Russian Relations are a great model for the Multipolar World is that both parties have the power to do horrible things to each other and yet they do not. We could say the relations between any vassal and master nations always look amazing. Western Europe can’t wait to kiss Washington’s boots the second it gets the chance. Now that Lukashenko has finally “picked sides” he will be singing the praises of a greater Russian World till his dying day.

“Relations” with vassals are essentially fake as they are a non-actor. Relations can only be “good” when one side dominates the other controlling its reality. The true challenge is when two powerful forces, with the potential to do great harm to each other, that may have areas of potential conflicts of interest, build an overall positive relationship. This is no easy task especially when the historical inertia of Cold War zero-sum gamesmanship is still pretty fresh in our minds.

As we are seeing globally, there is sort of a big-three poles being Washington, Moscow and Beijing. Certainly, from a Russian perspective it is very easy to tell the difference between dealing with these two nuclear-armed and economically massive titans and it is night and day.

Whether Sino-Russian relations are the greatest in history is up for debate, but they are certainly positive and can be like a breath of fresh air compared to the eternal stench from the swamp Washington has been sinking into. But more importantly this Eurasian friendship fest is a model of behavior for how a Multipolar World must work in order to be productive – “non-interference in internal affairs and respect for each other’s interests” as Putin put it.

This is the “proof of concept” that can further drive the Multipolar World forward. So, it is really not so important that Xi and Putin praise each other over conference calls, that is meaningless. The real issue is that they have worked out the model for the near future and it is both proven and fully functional.

One thought on “Are Sino-Russian Relations Really the ‘Best in History’?”