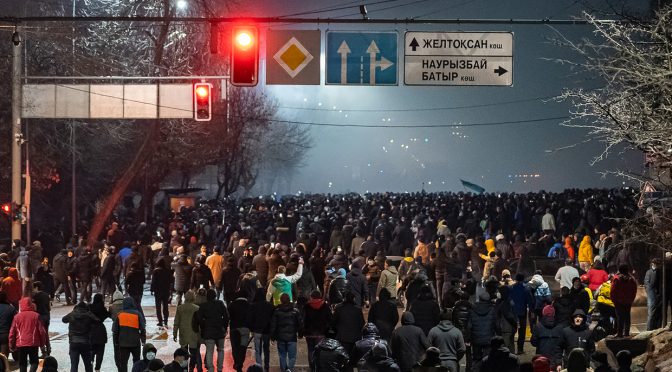 The sudden outbreak of violence in Kazakhstan has taken analysts and international observers by surprise. Now, the decision to deploy a regional peacekeeping force has become the latest major milestone for the post-Soviet space.

Foreign actors may not have started the unrest, but they’ll play the deciding role in how it ends.

In the early hours of Thursday morning, the Russian-led Collective Security Treaty Organization (CSTO), which joins the armed forces of six former republics of the USSR, including Kazakhstan, announced that it would send a peacekeeping force to help maintain order as unrest spread across the vast Central Asian nation.

The move represents a blurring of the line between internal and external processes – the reasons that the Kazakh government is teetering on the brink of collapse are domestic in nature, and are related to the prolonged and increasingly weird transfer of power after the almost three-decades-long rule of veteran leader Nursultan Nazarbayev.

However, the street protests, which were sparked by fuel prices and have seen government buildings torched and troops surrender to demonstrators, have been immediately presented as an act of outside aggression on the part of foreign “terrorist groups.” From now on, it seems, the enemy always comes from the outside, even if it is actually inside. That claim gives formal grounds to declare the country is under attack and call in the CSTO.

This was not the case in the past, when similar recurring events were seen frequently in Kyrgyzstan, nor in Armenia three and a half years ago. Back then, the CSTO – Moscow mainly, but also the other members themselves – highlighted the internal nature of the unrest, saying there was no need for a foreign intervention.

However, this time it’s different, and the lines between foreign and domestic affairs are getting blurred across the globe. Several decades ago, liberals and human rights activists were the driving force behind the increasing confusion between home and abroad, advocating that national sovereignty could be set aside when human rights and freedoms were at stake. Today, the given justifications are about protection and preservation: a threat to the national security of the country in question and its neighbors justifies the intervention.

It is worth noting that, this time, the request for peacekeepers came from a government with undisputed legitimacy – even the protesters themselves have only publicly demanded the departure of Nazarbayev, who maintains a hold over domestic politics, and not the current president. This is what makes it different from the events of 2010 in Bishkek, when acting Kyrgyz president Roza Otunbayeva tried to call the CSTO in after his predecessor, Kurmanbek Bakiyev, was ousted by mass protests.

Kyrgyzstan’s entire government system collapsed, which made any intervention highly questionable from a legal perspective. The legal grounds for the current decision are also stronger than those for the West’s so-called “humanitarian interventions” that resulted in toppling governments recognized at the international level, no matter how dubious their reputation.

In the future, we will probably learn more about how everything happened – the decision-making process in both Kazakhstan and Russia and who suggested involving the CSTO. For now, though, it’s clear that the Russian government chose to stay one step ahead instead of waiting for the kindling flame to turn into a blaze. This is the evolution of the approach used a year and a half ago in Belarus, when it was enough for President Vladimir Putin to warn that Russian forces were ready to intervene if the worsening domestic situation required it. This time, Moscow skipped the warnings and jumped straight into action, probably thinking that the Kazakh government might not hold out on its own.

But the lines must not fade away completely. The important question now is whether or not deploying the CSTO peacekeepers would spell the end of clan rivalry in Kazakhstan, as manifested by the “transition of power,” and instead lead to consolidation of power (and in whose hands?). Moscow has every chance to benefit from this, as it will now have a military presence in the state, central to its policy as a guarantor, whose actions might determine how the situation will unfold. This is similar to what happened in Armenia after the 2020 war. It’s only a temporary solution, but it provides an effective set of tools for the near future.

Many analysts urge that Russia should follow the example of the US and the EU, approaching “all stakeholders,” placating the opposition and shaping the balance of power favorable to Moscow in key states, but they do not take into account the fact that each political culture has its own strengths and weaknesses. In reality, Moscow does not know how to do this – it never did – and when it tried, it always failed. The ideal scenario for Russia is to have a military safeguard there that could spare it the headache of having to deal with complex local political life. In other words, no matter who wins, they would have to act with Russian military presence in mind and not disregard the country’s long-standing partner altogether.

About four or five years ago, what we call the post-Soviet space entered a crucially important stage when these countries had to prove that they were fully functional sovereign states. Back in 1991, they were recognized as such simply because the USSR collapsed rather than for any other reason. While their respective comings of age took different forms, the wider context was the same, with significant interest both from Russia and the West, and some on the regional level, but to a lesser degree. External players fighting over the post-Soviet space became a destabilizing factor, but it lent a certain logic to the developments and made them part of larger international processes.

However, at a certain point, political heavyweights started losing interest in whatever was happening in the “new independent states,” as they were referred to in the 1990s. Amid global shifts, international powers became more and more focused on their own ever-growing list of problems. They didn’t exactly turn away from the former Soviet states, but they started spending much less of their time and resources on them. This goes for Russia too, even though it has a special status in this configuration, and it was looking for optimal forms of influence in the context of its shrinking sphere of interests.

So the political landscape in the former Soviet states has been shaped through internal processes that reflected the interactions between the various actors involved, the local political culture and social structure.

There is also the fact that a new political generation is entering politics across the post-Soviet space and in some cases challenging older leaders.

These changes are not brought about by external influence. Foreign players have to react to them, intervene or threaten to intervene, as they did in Belarus, adapt and try to make it all work in their favor, but the final result depends on how mature and efficient a country’s new social and political systems are rather than on any foreign patrons.

This is an acid test, and not all countries will pass it. Armenia’s case shows that the consequences for a nation can be dire (and it’s not quite over yet), even though the dominant idea there was that, some glaring problems aside, the country had a strong identity and could successfully mobilize its resources and survive when faced with an old adversary. Kazakhstan might also turn out to be an example of how a long-cultivated façade of success is actually hiding a deeply problematic and twisted core. And this case is definitely not going to be the last.

This is the first time Russia is using an institution it controls to pursue its own political goals. Until now, it seemed that such structures were purely ornamental. It’s clear that the CSTO peacekeepers deployed to Kazakhstan will be made up mainly of Russian troops. First of all, that guarantees an effective response. Secondly, while Kazakhstan can agree to have Russian troops on its soil, Armenian or, say, Kyrgyz forces are absolutely out of the question. Still, using the coalition brand gives Moscow more opportunities and additionally justifies the existence of this alliance. Time will tell whether any other CSTO member states will face a Kazakh scenario, but the precedent has been set.

With Russia-US talks on security issues around the corner, this is a timely reminder that Moscow can make swift and unorthodox military and political decisions to influence the events in its sphere of interests. The larger this construct, the bigger the shouldered responsibility becomes, of course, including the responsibility for the developments in the countries where troubles are far from over. Of course, Moscow would have to deal with any fallout from these troubles anyway, and it’s easier to do so proactively and through a variety of tools at hand.

What is clear is that while branding the demonstrators foreign “terrorists” has allowed the Kazakh government to bring in heavyweight support from abroad, it has booted the conflict firmly into the international arena. It’s not yet clear what consequences this could have for the post-Soviet space, or for the world.

Fyodor Lukyanov is the editor-in-chief of Russia in Global Affairs, chairman of the Presidium of the Council on Foreign and Defense Policy, and research director of the Valdai International Discussion Club.