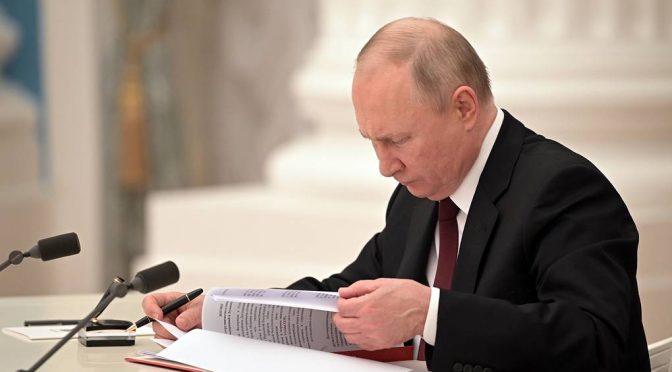 Tired of dealing with high profile Deep State talkingheads who are unauthorized to make meaningful policy decisions to avert a nuclear ware between East and West, the Russian President Vladimir Putin has decided to grant the Donetsk and Lugansk’s request for recognition as independent republics, which now warrants the deployment of Russian peacekeeping forces.

While the treaties of friendship and cooperation between Russia and the newly recognized republics of Donetsk and Lugansk are still in the draft stage, the Russian State Duma has released the proposed documents on Monday, showing that they will include common defense against external aggression and the right to use each other’s military infrastructure, among other things.

The State Duma overwhelmingly voted in favor of recognizing the rebel regions last week. The draft treaties of friendship and mutual assistance with both newly recognized states – due to last at least 10 years – have now been published on the legislature’s website.

Of particular interest is Article 5, which gives both contracting parties the right to “build, use and improve military infrastructure, bases and other objects on their territory.” The Kremlin has already ordered Russian troops to deploy into the two areas as peacekeepers, pending a formal treaty on military cooperation.

Article 6 bars both parties from “entering any blocs or alliances directed against either of them” and will not allow their territory to be used for launching attacks against one another.

Previously, according to the CIA controlled warmongering CNN, the “only real deterrent to a Ukraine invasion by Vladimir Putin is the potential military costs of Russian losses in the battlefield.” CNN’s Matthew Schmidt even advised Ukraine to “fall back and fight an insurgency, à la the Taliban’s fight against US and NATO forces in Afghanistan.”

These folks evidently have quickly forgotten that they’ve actually lost Afghanistan to the less dressed-for-war Talibans, just a few months ago, and if Ukraine will fight Russia as the “insurgents” then the latter may have lost that option already, i.e.:

The latest attempts at sending saboteurs inside the Russian border with Ukraine were effectively neutralized, and Western initial plans for false flag operations averted.

A Ukrainian soldier who was allegedly trying to cross over into Russia from the other side of the shared border has been captured and is being held prisoner, the chief of the country’s security forces has claimed.

He added that they had both been destroyed “as a result of the battle by our border guards and the Russian defense ministry.” According to Bortnikov, the situation on the border is now stable and under control.

Earlier on Monday, Russia’s Southern Military District said that it had thwarted a Ukrainian sabotage and reconnaissance group from violating the country’s border. Five of Kiev’s soldiers were killed and two combat vehicles were destroyed in the firefight, according to Russia’s version of events.

Moscow has published video evidence of what it says was an incursion by Ukrainian troops into Russian territory. A video from the Russian security service shows two BMP armored vehicles in the woods east of the disputed Donbass region, destroyed during Monday morning’s incident.

Black smoke can be seen rising from the wreck of a BMP-2 infantry fighting vehicle. An internal explosion appears to have blown off the turret and the rear hatches of the other vehicle, a BMP-1, which the video showed burning intensely.

While Russia has previously issued a statement about the firefight, this is the first video evidence of its aftermath – and the first reference to its location, a forest near the village of Mityakinskaya in the Rostov region, due east of Lugansk city.

This limits significantly the ammunitions available to Western media propaganda, which forces the Deep State to threaten once again that Russia could be cut off from the “world financial system” SWIFT, as if doing so could actually cripple the Russian economy that hasn’t only survived, but is now fully insulated from, the effects of the ongoing Western sanctions.

What the Deep State needs to realize is that the power of their propaganda networks, e.g., media and NGOs, has its own limit, and they have reached that threshold a long time ago. Every claim about what would happen to their aggressive interventions overseas has resulted in an opposite reality.

Indeed, the last two decades is a great education for all, from the realization that it was a controlled demolition of the World Trade Center and not a terror attack by Saddam Hussein, to the subsequent CNN induced “war of terror” that did not result to a progressive Iraq, or Afghanistan, but the proliferation of cocaine in the Western markets, and the introduction of the Patriot Act, which has nothing to do with patriotism, but more with the implementation of a Gestapo invasion of private homes.

The fact of the matter is, the motivation to start another war abroad at this time is to distract the Western population by uniting them against an imaginary enemy, instead of the identifying the real enemy from within, which is the Deep State that is now suffering from a financial hemorrhage of a bloated petrodollar. NordStream should not be allowed to supply natural gas to the EU.