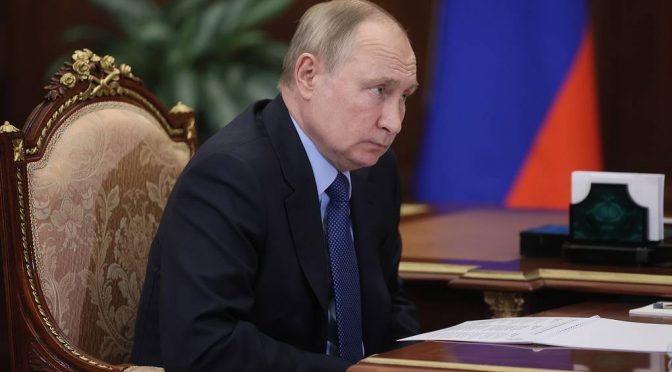 The Putin government has announced the highly targeted attacks on Ukrainian military installations, and the purging of Nazis from Kiev.

MOSCOW, February 24. /TASS/. Russian President Vladimir Putin said that he had made the decision to hold a special military operation in response to the address of leaders of Donbass republics.

“People’s republics of Donbass approached Russia with a request for help. In connection therewith, <…> I made the decision to hold a special military operation. Its goal is to protect the people that are subjected to abuse, genocide from the Kiev regime for eight years, and to this end we will seek to demilitarize and denazify Ukraine and put to justice those that committed numerous bloody crimes against peaceful people, including Russian nationals,” Putin said in the television address.

Justice and truth are on Russia’s side, President Vladimir Putin said in a special television address.

“The welfare, the very existence of entire countries and peoples, their success and health are always originating from the strong root system of culture and values, experience and traditions of ancestors, directly depending on abilities to quickly adapt to continuously changing life, consolidation of the society, its readiness to consolidate and gather all forces together for moving forward,” Putin said.

“Forces are always needed but they can be of different quality,” the Russian leader said. “And we know the real strength is in justice and truth that are on our side,” he added.

Russia has assured everyone that there’s no plans to take over whole of Ukraine, but will only do targeted strikes on military installations using precision weapons, and the full elimination of the Nazis implementing years of genocidal attacks against the independent republics, and even those in Kiev who harbor opposing sentiments.

As part of the ongoing targeted operation, Russia and Belarus have cut off its energy supply lines to Ukraine, while asking the Ukrainian military to disarm. This means that Putin doesn’t want a full-on bloodshed, but instead give those elements within the military and the civilian population the chance to topple the current Kiev government, which does not serve the fundamental interests of the people of Ukraine.

It is well understood that while the independent republics East of Kiev just want their autonomy and peace, the Russian government’s latest action is meant to deter NATO and US military from installing nuclear arms in Ukraine.

On the side of NATO and the Western military industrial complex, another war will add to the sustenance of the now crumbling Western military hegemony, distraction away from: the Epstein Scandal among others, and the globalization of the Freedom Convoy protests, bankruptcy of its banking and financial system, etc.

It will be interesting how the Western warmongers would respond in kind in the coming days because right now it’s all empty rhetorics, as most clowns do most of the time, to prod Kiev to push on with its anti-Russian stance, and those threats of anti-Russia economic sanctions that have been rendered ineffective over the years, with the latter’s military and economic cooperation with India and with the rest of the Eastern Alliance.

Russia has a history of defeating Nazis in their home turf, while the US and its allies have a combined history of coddling them with new identities.

As far as the citizens of the West are concerned, a lot of them will support another war for as long as it is not fought within their immediate territory, and this is the basic formula by which the US, UK, France, and Germany governments are using Ukraine as their frontliner war dog this time around.

The military industrialists will get their hardware sales and profits, the war sales agents, Biden, Macron, Trudeau, et al, will get their percentage commissions, the media will get their war footages for its audiences’ daily dose of entertainment, and finally, the UN eugenics society will get their depopulation figures ever closer to forecasted targets.

Precision weapons are used against military infrastructure, air defense sites, military airfields and aircraft, a statement cited by RIA Novosti said, which means that this will be a relatively short war, and less exciting for the warmongers.

What will happen though is that those citizens of the G7 countries will soon realize that they too are being ruled over by Nazis for decades, and it is to their interest to topple these common enemies from within the structures of economic and political power, if they still desire freedom and collective prosperity for their children’s sake, and for the pride of being citizens of the First World.

3 thoughts on “DeNazification and Demilitarization of Ukraine Now Underway”