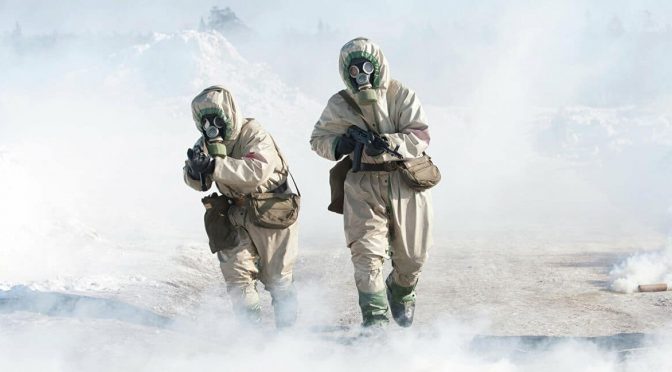 The non-government in Kiev is simply not allowed by the Empire to negotiate anything. Based on documents received from Ukrainian biolab employees, the Russian ModD revealed that research with samples of bat coronavirus, among other experiments, were conducted in a Pentagon-funded biolab.

By now what we may call a Triple Threat has been established as the catalyst anticipating the launch of Operation Z.

So after years of CIA-instigated shouts of “conspiracy theory!” and less than zero “fact checkers” activity, it turns out “it was all happening in Ukraine”, as divine messenger Maria Zakharova once again pointed out: “We have found your own products. We have found your biological material.”

The first-class investigative work of Dilyana Gaytandzhieva on Pentagon bioweapons [and here,] was fully vindicated.

Based on documents received from Ukrainian biolab employees, the Russian ModD revealed that research with samples of bat coronavirus, among other experiments, were conducted in a Pentagon-funded biolab.

The purpose of all this research – which included another Pentagon project to study the transfer of pathogens by wild birds migrating between Ukraine and Russia and other neighboring countries – was “to create a mechanism for the covert spread of deadly pathogens.”

In trademark pysop mode, everything was turned upside down by the United States government: those evil Russkies could take control of biological samples, so any “accident” involving biological and chemical weapons in Ukraine would have to be blamed on Russia.

The White House, in yet another flagrant display of unredeemable stupidity, accused Russia of “false claims” and China of “endorsing this propaganda”.

Kremlin spokesman Dmitry Peskov came up with the adult perspective: “The whole world will be interested to know what exactly the American bio-laboratories in Ukraine were doing.”

Down on the ground

Meanwhile, defying the fog of war while being targeted by Kiev’s free distribution of weapons without any measure of control, civilians on the path of Operation Z confirmed over and over again that Azov neo-Nazis prevent them from escaping encircled towns and villages. These Banderastan fanatics are the shock troops transforming Ukraine into a large Idlib – according to His Master’s Voice’s plan.

Neo-Nazis are doing exactly what ISIS/Daesh did in Syria: hiding behind civilians taken as hostages. Azov are the white clones of ISIS/Daesh. After all they learned their tactics from the same masters.

They will be bolstered by a fresh contingent of 450 fighters just arrived from – where else – Idlib, including lots of non-Syrians from Europe and the Maghreb. Most though are al-Qaedites and members of the Syrian branch of the Turkestan Islamic Party. Their transit point: the Syria-Turkish border, a smuggling free-for-all.

As it stands, the most detailed macro-view of how strategic Operation Z is developing has been outlined here.  The inestimable Andrei Martyanov describes it as a “combined arms police operation”: a delicate crossover between formation-level warfare (“combined arms”) and a police operation to arrest and/or destroy criminals (the full extent of “demilitarization” and “denazification”).

For an undiluted, down and dirty, eye to the ground perspective (translated into English), it’s hard to beat Russian military man Alexander Dubrovsky. He stresses how the objectives of the operation are “strategy and tactics”; and proceeding with haste is out of the question in this “completely new page in the art of war.”

Cutting through the fog, no one could realistically expect any breakthrough out of the meeting between Foreign Ministers Lavrov and Kuleba on the sidelines of the Diplomatic Forum in Antalya – as much as Turkey may have played a constructive role.

The non-government in Kiev is simply not allowed by the Empire to negotiate anything. The only tactic in town is stalling. Operation Z – or “the war” – could be stopped with a simple phone call from the Comedian in Kiev.

Lavrov at least was quite explicit on some key issues. Russia does not want war; never used oil and gas as a weapon; and wants Ukraine to be neutral.

The West, Lavrov added, refuses to understand the concept of “indivisibility of security”; those who supply Ukraine with weapons and send mercenaries should understand “they’re responsible for their actions”; and referring to the hysterical sanctions swamp, he stressed, “we will do everything to no longer depend on the West in any strategic sectors of our life.”

It’s quite enlightening to juxtapose Lavrov with clueless NATOstan “analysts”, totally ignorant of Eurasia and pontificating about “a new ideological conflict between irredentist tyrannies and liberal democracies”. It’s about sovereignty, stupid – not ideology.

NATOstan of course is incapable of understanding the process of Nazification of Ukraine – the key theme of any serious political/cultural/sociological analysis. It’s not an accident that the list of nations supporting the neoNazi-infested collapsed government in Kiev happens to largely coincide with the list of nations that refused to vote in favor of the UN resolution condemning the rehabilitation of Nazism.

In historical terms, these “analysts” might learn something by reading Mikhail Bulgakov’s The White Guard. Bulgakov considered Ukraine as an avowedly reductionist version of “the steppe”: culturally barren, not capable of creating anything, destined to barbaric destruction. It’s important to remember that when Ukraine attempted to constitute itself as a state in 1918-1920, cultural and industrial centers such as Odessa, Kherson, Nikolaev, Kharkov, Luhansk had never been Ukrainian. And western Ukraine for a long while was part of Poland.

All aboard the Eurasian train

On the economic front, the dogs of hybrid war bark while the Eurasia integration caravan marches on – with the Empire irretrievably being pushed outside of the Eurasian landmass.

In a phone call prior to the Lavrov-Kuleba meeting in Antalya, President Erdogan suggested to Putin setting up a trading mechanism in gold and also rubles, yuan and Turkish lira to beat the Western sanction hysteria. The source is Abdulkadir Selvi, very close to Erdogan. No Russia-China official comment yet.

The key fact is that Russia, China, and for that matter the entire Shanghai Cooperation Organization (SCO) – responsible for at least 30% of global GDP and the bulk of the Eurasian market – don’t need the West at all.

As Peter Koenig, a former senior economist at the World Bank points out, “Western GDP has a different basis, with blown out of proportion services, whereas the GDP of the SCO and the Global South is production-based. A huge difference when one looks at the backing of currencies: in the West there is literally none. Eastern currencies are mostly backed by national economies, especially in China and soon in Russia too. That leads to self-sufficiency, and no longer reliance on the West.”

In the larger geopolitical spectrum, the non-stop war of attrition by the Empire against Russia with Ukraine as a pawn is a war against the New Silk Roads; Maidan in 2014 took place only a few months after the launching of the Belt and Road Initiative (BRI), then OBOR (One Belt, One Road) in Kazakhstan and Indonesia. It’s also a war on the Russian concept of Greater Eurasia Partnership. In sum: it’s an all-out war on Eurasia integration.

And that bring us to the key aspect of BRI: Eurasia rail/road connectivity – between China and the EU and with one corridor traversing Russia. The coordinated NATOstan sanction hysteria is not only against Russia, but also against China.

For the Beltway, BRI is beyond anathema: it’s almost like the Beast of the Apocalypse. As a response, the West even has concocted puny schemes such as the American B3W (“Build Back Better World) and the EU’s Global Gateway. Their impact, so far, does not even qualify as negligible.

Ukraine in itself is not a problem for BRI; traffic is only 2% of eastbound China-Europe freight trains. But Russia is another story.

According to Feng Xubin, Vice Chairman of the China-Europe Railway Express Transportation Coordination Committee, the freight settlement system between China and Russia may be in trouble: “At present, freight is denominated in dollars […] If the West cuts off Russia’s intermediate settlement channel in the international financial system, it means that the settlement system for freight charges between China and Russia will not be able to proceed normally.”

From the EU’s point of view, trade interruptions are not exactly a good deal. China-EU freight traffic increased over 100% last year.

For instance, the European Bank for Reconstruction and Development (EBRD) and the Asian Infrastructure Investment Bank (AIIB) are co-financing a 67 km high-speed rail stretch from Istanbul to the Bulgarian border.

Sanctions on Russia will definitely affect the trans-Eurasia supply chain – on transportation, ports, insurance, communications. Yet quite a few sanctions may be revised later on, as the EU itself starts to feel the pain.

China will have an abundance of Plan Bs. The key northern BRI corridor remains China-Kazakhstan-Russia-Belarus-EU, but there is a possible detour via the Caspian, in Aktau in Kazakhstan. There will be extra incentive to fully link the Baku-Tbilisi-Kars (BTK) railway with the Turkish grid. And there will be extra movement in the International North-South Transportation Corridor (INSTC), with Baku connecting to the Iranian Caspian Sea coast and by rail to ultra-strategic Chabahar port.

So we may be heading towards extra impetus for BRI’s multimodal southern corridor – bypassing Russia: that means a boost for Turkey, the Caucasus and the Caspian. And no losses for China. As for Russia, even if this re-routing may last for a while, it’s not such a big deal. After all from now on Russia will be developing intensive trade towards the east and south of Eurasia, and not towards the sanctioning West.