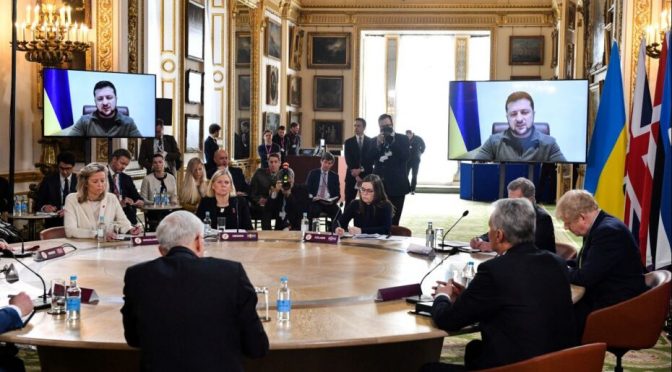 By the end of this month, as the Western media messaging goes, Russia will be defeated by the NATO-backed Ukrainian rag-tag of NeoNazi brigades.

Russia’s military intervention in Ukraine takes war to a new level of information warfare. Over the past three weeks, Western mainstream media has unleashed a tsunami of false information and distortion that has swept many people off their feet in disarray.

Appropriately, if not actually intended, on March 15 – the Ides of March no less – we had front pages blaring that Russia’s troops were facing defeat in two weeks. The NATO-backed Kiev regime forces “had Russian troops on the run”, or so we were told.

On the same date – famous for ominous predictions – Ukraine’s President Vladimir Zelensky was reported by Western media as urging Russian soldiers to surrender such was, it was implied, the futile no-win situation for them.

So make a note of that. By the end of this month, as the Western media messaging goes, Russia will be defeated by the NATO-backed Ukrainian rag-tag of NeoNazi brigades. Not only that but as U.S. Senator Lindsey Graham and American social media corporations have intimated Russian President Vladimir Putin may be assassinated.

The concoction of Shakespeare and Julius Caesar as a way to portray the conflict in Ukraine finds a handy cipher in the form of Ukraine’s Zelensky, the man who formerly was a comedy actor before he became president in 2019. Zelensky last week addressed the British House of Parliament by video to standing ovations, with stirring words channeling the famous English Bard and also wartime hero Winston Churchill. It was political theater written by Zelensky’s handlers in the CIA and MI6.

The actor-politician is pretty convincing too. He has played up his purported Jewish ancestry and Holocaust relatives as a way to undermine Russia’s claims of Neo-Nazi paramilitaries over-running Ukraine. Russia’s information on the Azov Battalion and other fascist formations is corroborated and well-documented by independent sources.

Zelensky has been at once a man of many parts. Some Western media remark on his high-profile public appearances rallying Ukrainians to resist, yet at the same time, incongruously, he has also been busy making defiant speeches dressed in military fatigues from what appears to be a secret bunker. That alleged precaution, we are informed (sic), is to prevent the Russian military from discovering his exact location and assassinating him with an airstrike.

A glitch in the drama – seemingly unnoticed by the fawning media – were reports of the prime ministers from Poland, the Czech Republic and Slovenia flying to Kiev on March 15 to meet with Zelensky and to demonstrate European solidarity.

Really? If Zelensky was hiding in bunkers out of fear for his life from Russian missiles and if Kiev was such a war zone from alleged indiscriminate airstrikes – as the Western media report wall-to-wall – would these European leaders really venture into the Ukrainian capital?

The conflict in Ukraine appears to be like no other in terms of the rampant false information and virtual realities that the Western media are using. It’s reminiscent of the Western hysteria over Syria and the “Siege of Aleppo” in late 2016 which turned out to be liberated by the Syrian army and its Russian allies from Western-backed terrorists. Images of explosions and civilian casualties attributed to Russian forces have been identified as being clipped from other wars, locations and years. Airstrikes in Gaza by Israeli forces have been reported as occurring in Ukrainian cities. Even Hollywood disaster movies have provided images recycled for “reports” of alleged Russian violations.

No doubt the Russian military intervention in Ukraine has caused suffering and displacement. What war has ever not? A Russian news program was disrupted when one of its employees mounted an anti-war protest on air.

But this war could have been avoided if the U.S. and its NATO allies had heeded Russia’s long-time security concerns. The weaponization of Ukraine since the CIA-orchestrated coup in 2014 and the unleashing of Neo-Nazi forces against Russian-speaking people were bound to result in war. The last straw was when Russian efforts at negotiating were met with relentless intransigence by the NATO powers.

Moscow says its military operation launched on February 24 will continue until the Kiev regime agrees to foreswear joining NATO, to eradicate its Neo-Nazi paramilitaries, and recognize Russia’s historic claim to Crimea as well as recognize the breakaway republics of Donetsk and Lugansk.

Zelensky has responded erratically like the puppet on a string he indubitably is. There have been four rounds of negotiations between his representatives and Russia. The Ukrainian CIA-MI6 puppet has at times talked about giving up on NATO membership and acceding to Russia’s territorial claims. Then he flips by giving defiant resistance speeches and calling for Russia’s surrender. The conclusion is that Zelensky and his regime are not serious about negotiating a resolution. Their function is to string out conflict as long as possible in order to undermine Russia and prolong the misery of the Ukrainian population – many of whom are glad to see Russian forces get rid of this corrupt regime.

The Western reporting on the conflict in Ukraine like Zelensky and his regime is something of an elaborate propaganda chimera. We are told the war is due entirely to the mad ravings of an evil Russian tyrant called Vladimir Putin – who, ludicrously, is comparable to Hitler. Western trashy tabloids as well as high-brow people like the US-based Bulletin of Atomic Scientists warn us that “Mad Vlad” is ready to use nuclear weapons or chemical and biological weapons of mass destruction. This is from Western media whose governments and military establishments were running biowarfare labs in Ukraine and who are training Neo-Nazi death squads.

Indeed, we may beware the Ides of March. Western propaganda is foretelling the downfall of Russia. The media are making Russia look desperate and depraved ready to use weapons of mass destruction. What for? A seeming self-fulfilling prophesy where they get to play savior of Ukraine?