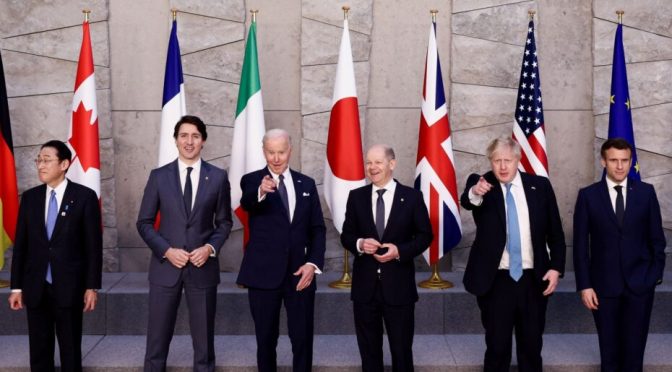 It is a pathetic spectacle. European governments are prostrated before the American empire. U.S. President Joe Biden flew to Europe this week with the presidential nuclear codes on display by his entourage.

Among the fleet of presidential aircraft was the “doomsday plane” – a specially fitted-out Boeing 747 capable of withstanding nuclear radiation and serving, if-needs-be, as a “Pentagon in the sky”.

Biden attended three back-to-back emergency summits of the G7, NATO and the European Union leaders in Brussels. It was reportedly the first time an American president has ever been invited to attend such an EU leaders’ summit.

There was a palpable sense of over-the-top contrived drama regarding the ongoing war in Ukraine. Russia’s military intervention in that country is now in its fourth week. Moscow has claimed reasons of self-defense and protection of Russian-speaking people in Donbass from a NATO-backed Nazi regime in Kiev.

The Western media and their governments, on the other hand, have claimed Russia’s actions are unprovoked aggression and the worst episode of barbarism since the Second World War. There is feverish Western media fears of Russia deploying chemical, biological and nuclear weapons of mass destruction. There are also hysterical fears of Russia next attacking Poland, the Baltics, and the rest of Europe.

Western media are portraying Biden’s visit to Europe as a replay of the supposed American defense of Europe from Nazism and Communism.

This is an incredible distortion by the Western media. The whole background of the conflict in Ukraine fomented by the U.S. and NATO over the past three decades has been scrubbed into a memory hole. So too scrubbed is the U.S. and NATO blitzkrieg on Yugoslavia whose 23rd anniversary occurred this week. The aggressive expansionism of NATO and hostility towards Russia have culminated in the present war in Ukraine. Yet Western media present this as due to alleged one-sided Russian aggression and maniacal tyranny in Moscow.

During his half-century career as a politician, Joe Biden fervently backed the U.S. and NATO war in Yugoslavia, as well as countless other criminal imperialist wars and regime-change operations. He is personally responsible for fomenting the coup regime in Kiev from 2014 onwards. The U.S. and NATO weaponization of Ukraine, including the functioning of Pentagon-sponsored biowarfare laboratories, is associated with Biden’s direct involvement in supporting the anti-Russian Kiev regime and its Nazi paramilitaries.

The irony of Biden warning about Russia using WMDs in Ukraine is sickening beyond words. The jihadist terrorists whom the US backed in Syria were responsible for atrocities with chemical weapons as provocations for NATO bombing of Syria. Biden’s son, Hunter, is implicated in funding bioweapons laboratories in Ukraine through his Pentagon-connected capital investment firm, Seneca.

And yet despite this flagrant imperial corruption and criminality, Biden was welcomed this week by European leaders who are demonstrating beyond doubt that they are nothing but an embarrassing collection of vassals.

The upshot is that Biden is selling massively more American weapons to Europe than ever before. He is sending more U.S. troops to European bases. The EU has imposed way more sanctions on Russia than the United States has, thus inflicting much more damage on European economies than the American one. Biden is to sign new deals with Europe on supplying American gas exports that are more expensive than Russian gas. The killing off of European-Russian energy trade is the crowning achievement for American imperialist interests.

Across the European Union, draconian media censorship has blacked out entirely the Russian news outlets Sputnik and RT. European citizens are being denied any alternative information or analysis. What the EU is doing is far more repressive than what the U.S. is even doing in terms of censoring media. European so-called democracy is coming out of the closet as proto-fascism.

It is a pathetic spectacle. European governments are prostrated before the American empire.

It is blatant what President Biden is asserting. A new Cold War that is reshaping Europe under American hegemony, selling weapons and expensive gas to Europe while excluding Russia from developing any normal relations with its continental neighbors. The war in Ukraine has been a long time coming because of U.S. policies facilitated by politicians like Joe Biden and Madeleine Albright, the former Secretary of State who led the NATO bombing of Yugoslavia in 1999, who died this week.

It is incredible that not one of the incumbent European Union leaders has voiced criticism or dissent from the U.S.-contrived new Cold War. Of course not. They are bought and paid for like the whores they are, while their populations suffer from poverty, militarism, and the shadow of nuclear war.

The European leaders are like quislings licking the boot of their master. Their abject subjugation is emboldening American imperial warmongering against Russia. They seem willing to let their own people suffer the consequences of U.S.-led conflict, even to the point of facilitating a Third World War in Europe.

There is a misconception that fascism in Europe was somehow a unique development in Nazi Germany. The Third Reich had many European collaborators in Poland, the Baltics, Italy, France, Spain, and other covert sources like the British establishment during the 1930s.

U.S. and Western media present Biden and the European so-called leaders as a model of democracy and righteousness. The truth is we are seeing the return to fascism in Europe under the leadership of U.S. hegemony. When Biden took up office in the White House in January 2021, he declared, “America is back”. For anyone paying attention to history and U.S. power ambitions that kind of jingoistic bragging was seen as ominous. It’s becoming more ominous from every step the U.S. takes to wind up reckless tensions with Russia and indeed China.

America is back all right, and the European vassals are on their backs, and also their fronts… because, you know, we have to be gender pluralist in our new touchy-feely fascist era.

What’s even more shameful is the European political class is acting as a doormat for American imperialism against the urgent interests of European citizens. The ultimate interest is one of having peace. That contradiction is a harbinger of massive social upheaval across Europe in revolt against their treacherous leaders.