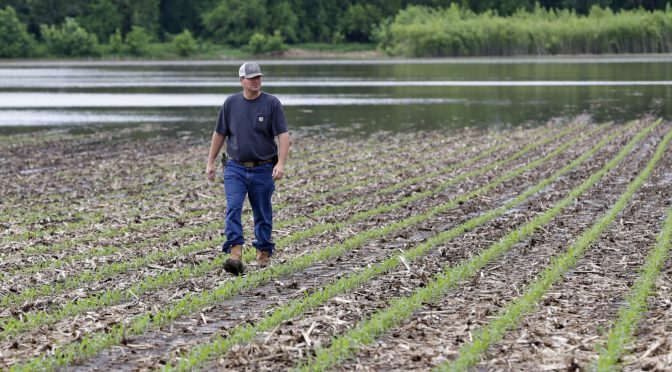 It’s beginning to look like some bad actors are deliberately taking steps to guarantee a coming global food crisis. Every measure that the Biden Administration strategists have been making to “control energy inflation” is damaging the supply or inflating the price of natural gas, oil and coal to the global economy.

This is having a huge impact on fertilizer prices and food production. That began well before Ukraine. Now reports are circulating that Biden’s people have intervened to block the freight rail shipping of fertilizer at the most critical time for spring planting. By this autumn the effects will be explosive.

With the crucial time for USA spring planting at its critical phase, CF Industries of Deerfield, Illinois, the largest US supplier of nitrogen fertilizers as well as a vital diesel engine additive, issued a press release stating that,

“On Friday, April 8, 2022, Union Pacific informed CF Industries without advance notice that it was mandating certain shippers to reduce the volume of private cars on its railroad effective immediately.”

Union Pacific is one of only four major rail companies that together carry some 80% of all US agriculture rail freight. The CF company CEO, Tony Will stated,

“The timing of this action by Union Pacific could not come at a worse time for farmers. Not only will fertilizer be delayed by these shipping restrictions, but additional fertilizer needed to complete spring applications may be unable to reach farmers at all. By placing this arbitrary restriction on just a handful of shippers, Union Pacific is jeopardizing farmers’ harvests and increasing the cost of food for consumers.”

CF has made urgent appeals to the Biden Administration for remedy, so far with no positive action.

CF Industries noted that they were one of only thirty companies subject to the severe measure, which is indefinite. They ship via Union Pacific rail lines primarily from its Donaldsonville Complex in Louisiana and its Port Neal Complex in Iowa, to serve key farm states including Iowa, Illinois, Kansas, Nebraska, Texas and California.

The ban will affect nitrogen fertilizers such as urea and urea ammonium nitrate (UAN), as well as diesel exhaust fluid, DEF (called AdBlue in Europe). DEF is an emissions control product required for diesel trucks today. Without it engines cannot run. It is made from urea. CF Industries is the largest producer of urea, UAN and DEF in North America, and its Donaldsonville Complex is the largest single production facility for the products in North America.

At the same time, the Biden gang has announced a fake remedy for record high gasoline pump prices. Washington announced the EPA will allow a 50% increase in corn-based biodiesel and ethanol fuel mix for the summer. On April 12 the Secretary of Agriculture announced a “bold” initiative by the US Administration to increase the use of domestically-grown corn-ethanol biofuels.

Secretary Tom Vilsack claimed the measure would “reduce energy prices and tackle rising consumer prices caused by Putin’s Price Hike (sic) by tapping into a strong and bright future for the biofuel industry, in cars and trucks and the rail, marine, and aviation sectors and supporting use of E15 fuel this summer.”

Only the capitalized “Putin Price Hike” is not a result of Russian actions, but of Washington Green Energy decisions to phase out oil and gas. The energy price inflation is also about to go vastly higher in coming months owing to US and EU economic sanctions on export of Russian oil and likely gas. However the central point is that every acre of US farmland dedicated to growing corn for biofuels removes that food production from the food chain, to burn it as fuel.

Since passage of the 2007 US Renewable Fuel Standards Act, which mandated annually rising targets for production of corn for ethanol fuel blends, biofuels have captured a huge part of total corn acreage, more than 40% in 2015. That shift, mandated by law, to burning corn as fuel had added a major price inflation for food well before the covid inflation crisis began. The USA is by far world’s largest corn producer and exporter.

Now to mandate a significant increase in corn ethanol for fuel at a time of astronomical fertilizer prices, and fertilizer rail shipping are being blocked reportedly by White House orders, will send corn prices through the roof. Washington knows this very well. It is deliberate.

No wonder the price of US corn reached a 10-year high in mid-April, as exports from Russia and Ukraine, major sources, are now blocked by sanction and war. Aside from the energy-inefficient use of US corn for biodiesel supply, the latest Biden ethanol initiative will add to the growing food crisis while doing nothing to lower US gasoline prices.

A major use for US feed corn is as animal feed for cattle, pigs and poultry as well as for human diets. This cynical biofuel order is not about US “energy independence.” Biden ended that in his first days in office by a series of bans on oil and gas drilling and pipelines as part of his Zero Carbon agenda.

In what is clearly becoming a US Administration war on food, the situation is being dramatically aggravated by USDA demands for chicken farmers to kill off millions of chickens in now 27 states, allegedly for signs of Bird Flu infection. The H5N1 Bird Flu “virus” was exposed in 2015 as a complete hoax.

The tests used by the US government inspectors to determine bird flu now are the same unreliable PCR tests used for COVID in humans. The test is worthless for that. US Government officials estimate that since first cases were “tested” positive in February, at least 23 million chickens and turkeys have been culled to allegedly contain the spread of a disease whose cause could be the incredibly unsanitary cage confinement of mass industrial chicken CAFOs.

The upshot is sharp rises in prices of egg by some 300% since November and severe loss of chicken protein sources for American consumers at a time when overall cost of living inflation is at a 40-year high.

To make matters worse, California and Oregon are again declaring water emergency amid a multi-year drought and are sharply reducing irrigation water to farmers in California, who produce the major share of US fresh vegetables and fruits. That drought has since spread to cover most agriculture land west of the Mississippi River, meaning much of US farmland.

US food security is under threat as never before since the 1930s Dust Bowl, and the Biden Administration “Green Agenda” is doing everything to make the impact worse for its citizens.

In recent comments US President Biden remarked without elaborating that the US food shortages are “going to be real.” His administration also is deaf to pleas of farmer organizations to allow cultivation of some 4 million acres of farmland ordered left out of cultivation for “environmental reasons. However this is not the only part of the world where crisis in food is developing.

These deliberate Washington actions are taking place at a time a global series of food disasters create the worst food supply situation in decades, perhaps since the World War II end.

In the EU, which is significantly dependent on Russia, Belarus and Ukraine for feed grains, fertilizers and energy, sanctions are making the covid-induced food shortages dramatically worse. The EU uses its foolish Green Agenda as an excuse to forbid the Italian government from ignoring EU rules limiting state aid to farmers.

In Germany, the new Green Party Agriculture Minister Cem Özdemir, who wants to phase out traditional agriculture allegedly for its “greenhouse gas” emissions, has given farmers who want to grow more food a cold response. The EU faces many of the same disastrous threats to food security as the USA and even more dependence on Russian energy which is about to be suicidally sanctioned by the EU.

The major food producing countries in South America, especially Argentina and Paraguay, are in the midst of a severe drought attributed to a periodic La Niña Pacific anomaly that has crippled crops there. Sanctions on Belarus and Russia fertilizers are threatening Brazil crops, aggravated with bottlenecks in ocean transport.

China just announced that owing to severe rains in 2021, this year’s winter wheat crop could be the worst in its history. The CCP also has instituted severe measures to get farmers to expand cultivation to non-farm lands with little reported effect. According to a report by China watcher Erik Mertz,

“In China’s Jilin, Heilongjiang, and Liaoning provinces, officials have reported one in three farmers lack sufficient seed and fertilizer supplies to begin planting for the optimum spring window… According to sources within these areas, they are stuck waiting on seed and fertilizer which have been imported to China from overseas – and which are stuck in the cargo ships sitting off the coast of Shanghai.”

Shanghai, the world’s largest container port, has been under a bizarre “Zero Covid” total quarantine for more than four weeks with no end in sight. In a desperate bid by the CCP “ordering” increased food production, local CP officials throughout China have begun transforming basketball courts and even roads into cropland. The food situation in China is forcing the country to import far more at a time of global shortages, driving world grain and food prices even higher.

David M. Beasley, executive director of the UN World Food Program, declared recently on the global food outlook, “There is no precedent even close to this since World War II.”

Notably, it was the Biden Treasury Department that drew up a list of the most comprehensive economic sanctions against Russia and Belarus, pressuring a compliant EU to dutifully follow, sanctions whose impact on global grain and fertilizer and energy supply and prices was entirely predictable. It was in effect a sanction on the US and global economy.

These are but the latest examples of deliberate US Government sabotage of the food chain as part of the Biden Green Agenda, of Davos WEF, Bill Gates and the Rockefeller Foundation, as part of their dystopian Great Reset eugenics agenda. Traditional agriculture is to be replaced by a synthetic lab grown diet of fake meats and protein from grasshoppers and worms, worldwide. All for the supposed glory of controlling global climate. This is truly mad.

F. William Engdahl is strategic risk consultant and lecturer, he holds a degree in politics from Princeton University and is a best-selling author on oil and geopolitics.

3 thoughts on “Towards a Global Food Disaster, Engineered through Acts of Political Sabotage”