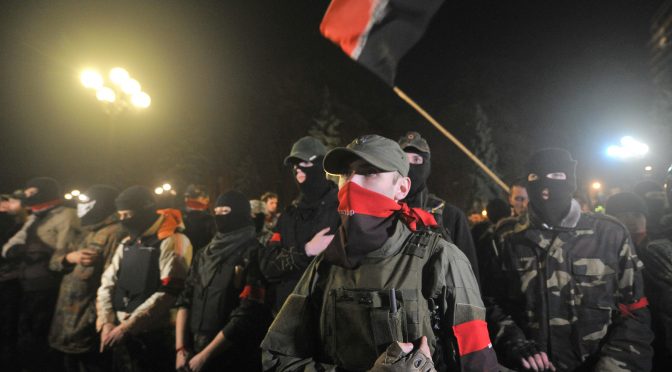 Is it anything positive when mainstream media starts to admit that Ukraine is losing the war with Russia?  Not necessarily.  While when she is losing – we should send her help even more!

You know, Rohan – Gondor, that is very serious…  So better let us be extremely watchful.  The Third World War option is still on the table.  And please remember: even when they lie less – they still cheat all the time.

Silences and hidden costs. This war is based on a lie

On lying to the World that it has not lasted since 2014, that there was no mass murder by the Nazi Banderites in Odessa, on 2nd May 2014, that the Ukrainian Nazi-battalions did not shoot the civilian population of Donbas, that the Kiev junta did not bomb residential areas of Donetsk, that drinking water supplies in Crimea were not cut off by Ukrainians, that the opponents of Anglo-Saxon domination over Ukraine were not assassinated.

And finally, that there was no plan of Ukrainian attack against the Donbass People’s Republics and Crimea in February 2022.

They lied and still lie, and even when they are silent, it is also only to cheat and hide the facts, such as Kiev attempts to produce dirty nuclear bombs and American biological weapons laboratories working in Ukraine.

They are also silent about the true costs of this war.

Both the direct ones, related to sending budget money, fuel, and weapons, as well as those resulting from the trade war with Russia, from the forced withdrawal of companies from the Russian market, and above all from a suicidal energy policy, which is at the same time inflationary and condemns millions of households to energy exclusion and misery.  We live in a time of multiplied lies on a strategic scale, and it can be summarised in several very expressive pictures.

Let’s take one of the many photos distributed a few weeks ago on the Western Internet as evidence of the allegedly unprecedented criminal nature of Russian aggression.

The photograph shows the body of a little boy in rompers lying in a coffin. Icons are placed next to his calm face and in the background a crying woman holds an older man in the deepest despair.

Commentaries explained that this a funeral of four-year-old Artiom, killed in a Russian artillery fire in the suburbs of Donetsk.  It is this last detail – the location – that should make viewers cautious.

Why would the Russians attack the Donetsk suburbs, when this area has been under the control of pro-Russian People’s Republic of Donesk for eight years, and the front line is now many kilometres west of the capital of the independent Donbass?

However, the observers’ attention was focused on a boundless tragedy of the entire scene, so instead of geographical deliberations, bellow this photo we could find only hundreds of insults against the Russian aggressors allegedly killing innocent children. Well, it is hardly surprising, isn’t it?

Not at all.  Although the truth is different in a hard to imagine manner.  Artiom Bobryshev is really dead.

And he was really only 4 years and 4 months old at the time of his death.

And he lived with his family in the Kirov region of Donetsk.

The point is that he was killed on the 15th January 2015. SEVEN YEARS AGO.

During one of the hundreds of Ukrainian firings on Donetsk.  KILLED FROM UKRAINIAN MISSILES fired by the Kiev junta on the civilian city districts of the Donbass People’s Republics.

Because this war has been going on for eight years. Donetsk children were really murdered there.  And the truth is still murdered.

The same deadly propaganda laboratory prepared and distributed photos and videos from the UKRAINIAN missile attack on Donetsk – as evidence that … the Russians are bombing civilian targets in Kiev.

If it was not about the human life dimension, that would be almost satirical Internet humbug, when Ukrainian propaganda calls “Let’s save Odessa from crazy Putin who comes to destroy it!”

Odessa, a wonderful, internationalist city where Ukrainian Nazis tried to burn its local Russian-speaking identity with live fire, the same as they murdered 42 victims in the House of Unions! Odessa awaiting Russian liberation to be saved from Putin!

Nazi trail vs. return of normality

Even those who are blinded by some bizarre feelings towards the current authorities in Kiev or fascinated by Ukrainian pointless resistance, imposed by the Anglo-Saxons, with time will have to see that normal life is really returning to the areas under the Russian and Donbas control, reconstruction begins, civil administration acts and people are just alive and want to live on.

Whether someone in the West likes it or not – to live in Russia, in Novorossiya, also in a changed, denazified Ukraine, but to live normally.

Because what alternative do fanatics present?  Endless war, “the aid” half stolen on its way to Ukraine by the oligarchs and half sent immediately back to the Anglo-Saxon “donors” and memes, a lot of memes based on Kiev fakes?

Another systemic lie is also the hurried, alleged denazification of the AZOV Battalion.

The Nazi symbols of this gang are quietly removed and hidden.  And for the most distrustful there is a version, that “this is a different, more friendly kind of Nazism”.

Besides, Zelensky’s sponsors just follows the Banderites predecessors, acting the same as UPA (Nazi Ukrainian Insurgent Army) which when came under British control at the turn of 1946/47 forbade to expose swastikas and ordered to change popular nicknames like “Killer of the Jews” or “Throat Cutter”.

However, of course, Nazis are Nazis even with replaced badges and slogans, whenever we think about historical UPA or the present AZOV and other pro-Western Kiev forces.  And this is playing around with the forces, ideology and practice responsible for genocide.

Unfortunately, many people, having shown Kiev and Anglo-Saxon lies in black and white, react with unacceptance and anger.  Instead of reflection and self-awareness – what unfolds is escalation and further self-deception.

Of course, lying is an inherent feature of the falsehood known as liberal democracy, but succumbing to it now equals to the global suicide.  That is why it is so important not to repeat the lies of Kiev propaganda. To keep the rational view and thinking.  To check the sources and verify the facts before copying news, memes and pictures.

Sure, the punishment for thinking can be painful. We know it seeing more and more scholars and thinkers abused in universities and blacken in the mainstream media simply for academic analysis of the current conflict.  So even more it is high time to understand this greatest lie.  It is not that we say SUCH things, “because we are Russian agents”. Just the opposite.  They call us “Russian agents, Kremlin supporters, Putin’s influencers” – just because we refute the lies: we say and write simple and basic things, namely the truth.

Konrad Rękas is a renowned geopolitical analyst and a regular contributor to Global Research.