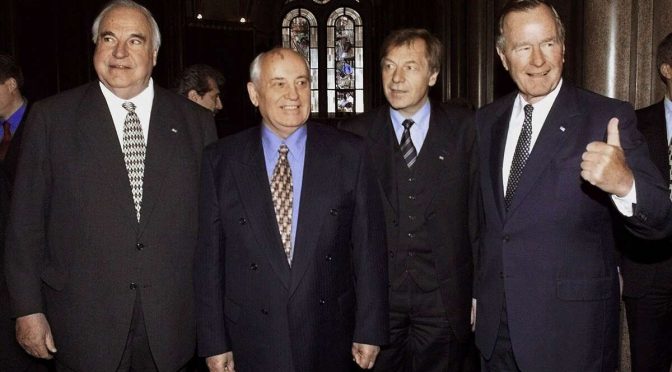 The recent events in Ukraine have marked the expiry of the New World Order, as Bush defined it, and the beginning of a new era in relations between nations, an era which had long been known to many people around the world.

It is only three decades since George H. W. Bush spoke of a “New World Order” in 1991, during NATO’s invasion of Iraq. However, the new order which was introduced shortly after the collapse of the Soviet Union, and was indicative of the emergence of a unipolar world, was soon challenged.

For the past thirty years, on the one hand, some of the world’s great and middle powers across various continents and regions have sought to challenge US global hegemony by pursuing multilateral policies.

On the other hand, the capitalist system soon realised that its political and economic stability and survival would be difficult to attain without the existence of a serious rival and enemy. That is why, ever since the beginning of the post-Cold War, the world has lived in a conflict between a unipolar world with globalised American values and a multipolar world characterised by cultural and political diversity.

The recent events in Ukraine have marked the expiry of the New World Order, as Bush defined it, and the beginning of a new era in relations between nations, an era which had long been known to many people around the world. In this new age, governments are still the major actors; however, nations have assumed a more prominent role through mass media and cyberspace.

War, rivalry, and the formation of new alliances continue to be the primary models for relations between countries. What we see in Europe and the US today, from mass sanctions against other countries to the encouragement of neutral governments such as Sweden and Finland to join NATO, all testify to the formation of new alignments and a new power bloc.

However, despite the existing marginal discourses, the current war stems primarily from geopolitical necessities and has a less ideological essence. None of the parties seeks to establish a utopia, and the countries have tended to take a realistic approach and set their national interests as the primary criterion for action. Moreover, the parties’ mutual economic dependence has made them vulnerable.

As a result, several European countries are resisting the policy of boycotting energy purchases from Russia. In this geopolitical war, the countries able to design new scenarios to take advantage of existing opportunities in the field of political and economic geography will gain the upper hand.

Meanwhile, Russia is at the forefront of the war against the West these days, and needs to reconsider its foreign policy approach and adapt it to new global conditions more than ever. In this new order, two Eastern Bloc powers, China and Russia, are standing side by side. In recent months, we have also seen that a large number of countries around the world have tried to take a neutral position on the Ukraine war.

It signifies that these countries, which are home to a large part of the world’s population, do not want to go along with the former unipolar world order. However, they are inclined to know at the same time what opportunities they would have through the formation of a new order in the world.

At this stage of the transition period, what seems crucial is how Russia will change its geopolitical approach at the regional and international levels. In recent months, the growing presence of Russian investors and merchants in Asian countries, especially in the two ‘near abroad’ regions of Central Asia and the Caucasus, marks the beginning of changes in Russia’s geoeconomic policies.

If Russia has a military confrontation with the West on the Western front, Russian investors could formulate new opportunities for cooperation on this country’s vast southern and eastern borders.

Undoubtedly, their entry into the markets of Central Asia and the Caucasus nations has the potential to lead them to the open waters of the Persian Gulf. Russia has allies in the west, south, and east of Asia. Communicating and expanding partnerships with these countries, especially in the economic sphere, could make Russia more resilient to sanctions and prevent US unilateralism by securing the interests of other global actors.

In the meantime, Iran can be of special importance to either side of the international chess game. Given the special natural capacities of this West Asian power, its alliance with any of the great powers in this period of transition to a new world order could influence the balance of power to some extent. Indeed, what gives significance to Iran’s geopolitical position is that this country could link Russia to various Asian regions and establish a direct link between the Caspian Sea and the Persian Gulf.

Apart from providing a short, safe, and inexpensive route for transporting goods along the North-South Corridor, Iran can play a pivotal role in the energy transfer process from Russia to consumer markets (either by swap or by pipeline).

Given the fact that Russia is facing tough international sanctions from the Western bloc, it would be strange if it continues to impose Western economic sanctions on Iran. Today, the continuation of Russian economic sanctions on Iran and its regional allies constitute a form of self-imposed sanctions. In other words, it seems that the continuation of the game according to the rules and regulations defined by the West would bind Russia’s hands and feet in taking advantage of all available capacities.

On the other hand, today, as a new era where new alignments have begun between the world’s great powers, Russia has a golden opportunity to invite Asian, African, and Latin American countries to discuss the formation of a united economic bloc.

Given various international considerations and political and economic rivalries between some governments to host such colloquia in the present context, and owing to the extensive diplomatic relations between Iran and Russia as well as Iran’s close collaboration with other continental and regional powers, Tehran could be a prime capital to host this conference and discuss the “Post New World Order”.

It should not be overlooked that changes in policies and approaches lead to the rapid disappearance of the opportunities to form alliances in the international arena. The changing conditions in the international sphere and the lack of immediate use of existing capacities might lead to a different destiny in regional and international relations, and lead countries to embrace other policies to ensure their national interests and security.

In sum, in the middle of World War II, when the Americans sent military equipment to the Red Army via Iran, enabling it to break the resistance of Hitler’s unified armed forces (the Wehrmacht) in Stalingrad, Iran received the “Bridge of Victory” title. Perhaps it is time to refer to Iran using the same title once again.