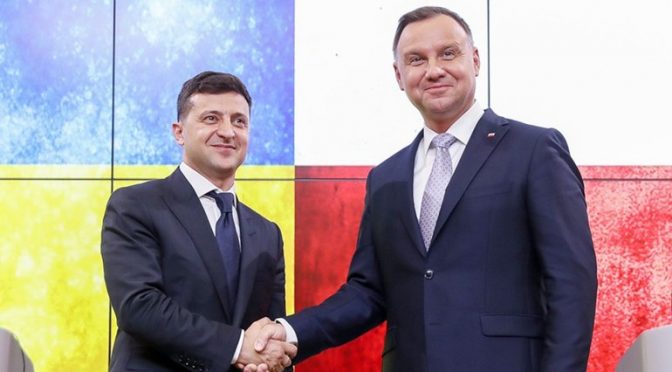 Poland and Ukraine have a complex history of massacres on both sides. However, for eight years, they have been united against Russia. After having considered annexing a Russian territory if Moscow loses the war, Warsaw would like to annex a Ukrainian territory, if Kiev loses. President Andrzej Duda has reportedly received guarantees from his counterpart Volodymyr Zelensky that, in gratitude

for his military aid against the Russians, his country could annex Galicia.

From the Carpathian Mountains to the Urals, there are no mountains. Consequently, Eastern Europe is a vast plain in which many peoples have passed and sometimes settled without the relief allowing to delimit the borders of their territory. Poland, Moldavia, Ukraine, Belarus, the Baltic States and the European part of Russia are corridors of passage whose history is dominated by flows. Most of these states back onto a sea or a mountain. Only Belarus and Ukraine have no natural borders.

When the Versailles Peace Conference attempted to establish borders in Eastern Europe at the end of the First World War, it did not succeed. Depending on whether historical, linguistic, ethnic or economic criteria were used, different maps should have been devised, but the interests of the victors (the United States, France, the United Kingdom) were contradictory, so that the decisions taken satisfied only half of the people concerned. Even today, the problem can be turned around in all directions: the borders of Belarus and Ukraine are and will remain artificial. This is a very special situation, difficult to understand for people with a long national history.

Once this is established, it must be admitted that neither Belarus nor Ukraine can be nations in the usual sense of the term, which does not mean that they cannot be states. Ukrainian nationalism” is an artificial ideology that can only be built by rejecting other peoples. This is what the Banderists did during the interwar period and still today against the “Muscovites” or “Great Russians”. This form of nationalism can only be destructive. The example of Belarus shows that another way is possible.

Poland, which had completely disappeared during the 19th century, was reconstituted after the defeat of the Austro-Hungarian Empire and the Russian Revolution. However, the Versailles Conference, while it had no problem in establishing its western border, did not know where to establish its eastern border. So the Second Polish Republic tried to grow by waging a war against Ukraine. It succeeded in annexing the whole of Galicia. Today Krakow is still Polish, while Lviv is Ukrainian. There is actually no obvious reason for this division, other than the chance of armed conflicts.

When President Volodymyr Zelensky claims that Donbass and Crimea are Ukrainian, he describes the current state of the land register, but cannot justify it.

In 1792, the Crimea was conquered by the Russian Empire from the Ottoman Empire, as well as the freedom for its fleet to use the Dardanelles and Bosporus straits. Tsarina Catherine II intended to extend her influence towards the South Seas. But the British, worried that the Russians would enter the Mediterranean and compete with their naval hegemony, organized a coalition with France and the Ottoman Empire. They succeeded in defeating the Russian army, but not in retaking this territory.

This one was kept, in 1917, by the Soviet Union. It was in the Crimea, in Sevastopol, that the decisive battle of the “Second World War” (or the “Great Patriotic War” in Russian terminology) took place, marking the beginning of the end of the Third Reich.

When the Soviet Union collapsed, Crimea declared itself independent by referendum on February 12, 1991, under the name of Autonomous Soviet Socialist Republic of Crimea. The rest of today’s Ukraine did not confirm its independence until nine months later, on 1 December 1991. However, Russian President Boris Yeltsin refused to return Crimea to his country, so it decided to return to Ukraine on February 26, 1992.

When the democratically elected president Viktor Yanukovych was overthrown by a colorful revolution organized by the United States, the government that was formed included a dozen banderist members [1]. Under these conditions, Crimea refused to have a racist political regime imposed on it. It decided in a referendum to regain its independence and to apply for membership in the Russian Federation.

After the installation of Russian military bases in Syria, London saw the Russian presence in Crimea as the return of a credible rival, capable of threatening its maritime hegemony.

After conquering the Crimea, Tsarina Catherine II sent her fleet to Beirut and Latakia. She also established a settlement in southern Ukraine, the “New Russia” (Novorossia). This territory included Donbass, Mykolayev, Kirovograd (today Kropyvnytskyi), Kherson, Odessa, Gagauzia and Transnistria (today’s Dniester Moldavian Republic). Pavel Gubarev, who was governor of Donetsk in 2014, also opposed the new regime in Kiev imposed by the “coup” or by the “revolution” (it depends on the point of view). So he proposed to secede from Ukraine with all the territories of the “New Russia” of Catherine II. It is necessary to know that Goubarev was neither pro-Russian, nor pro-US, but on the contrary pro-European. It was only when Kiev arrested and imprisoned him that he became pro-Russian. When President Zelensky refused the Russian peace offer, President Putin told him that his demands would increase with time. From now on, liberating the “New Russia” (Novorossia) is the strategic objective of the Russian armies. In almost all wars, the victor demands compensation, often territory. Here, it will be Novorossia.

By creating the United Nations, the victors of the Second World War hoped to put an end to wars of conquest. However, they recognized that war could be a legal response to certain conflicts. The great powers refrained until Nato tore Yugoslavia apart, creating seven new countries. Kosovo became a US military base in the Balkans. Its security is still provided by a NATO contingent. Bosnia-Herzegovina is still a colony of the European Union. It is still ruled by an international High Representative. These deplorable examples set a precedent that will not allow for criticism of Novorossia’s possible accession to the Russian Federation.

Poland, which still has not accepted the loss of Eastern Galicia, participated in 2014 in the Anglo-Saxon operation to overthrow the elected president. At the time, I published an article revealing that 86 rioters from the banderist militia Pravy Sektor had been trained by Poland at the Legionowo police center in September 2013 [2]. The operation had been supervised by Radosław Sikorski, Minister of Defense and later Minister of Foreign Affairs. This information was denied by the person concerned, but in the end the Prosecutor General of Poland opened a judicial investigation into this strange case.

Poland’s support of the Banderists against the Ukrainian president was a nice manipulation. Stepan Bandera had indeed supervised, in 1934, the assassination of the Polish Minister of the Interior Bronisław Pieracki on behalf of the Gestapo. Then he had ordered numerous massacres of Poles during the Second World War.

It soon became apparent that the 2014 Ukrainian colorful revolution/coup was overseen by Straussian diplomats Victoria Nuland (current No. 2 in the U.S. Secretary of State) and Derek Chollet (current advisor to the U.S. Secretary of State), but implemented by Canadians and Poles Radosław Sikorski and Jerzy Dziewulski. The latter is a prestigious police officer, trained in Israel, and later an advisor to the President of the Republic and a parliamentarian. A photo, taken in June 2014, showed him leading the Ukrainian intervention forces alongside Ukrainian interim president Oleksandr Turchynov.

Poland returned to the fray at the start of the 2022 Russian special military operation. When Nato announced an imminent Russian defeat, General Waldemar Skrzypczak demanded that Kaliningrad (which was never Polish) be returned by Russia to Poland as war reparations. As it soon became clear that Russia was advancing and that the defeat would be Ukrainian, President Andrzej Duda considered recovering Eastern Galicia, which had been lost in the Second World War. At first he proposed to the Ukrainians to deploy a Polish peace force to protect Galicia. Then he made a stirring speech to assure his neighbors of their support against Russia. Finally, he went to Kiev and made a speech to the Verkhovna Rada. Finally, Poland began to implement a one-way cooperation. It deployed high-ranking officials to administer the country that a large part of the population fled. But not the other way around: there are no Ukrainian officials in Poland. Similarly, after taking in two million Ukrainian political refugees, Poland has indicated that it will stop paying them allowances as of July 1.

The enthusiastic acceptance of Warsaw’s aid for territory by the Banderists attests to the artificial nature of their “nationalism.