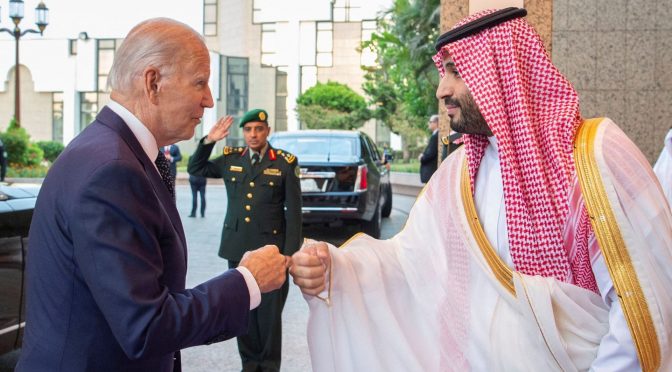 US President Biden’s visit to Saudi recently was never about Khashoggi, but about how much oil Saudi Arabia can supply US oil companies for profit. It turns out, the House of Salman only needs to import more Russian oil to augment its own production that was hampered from multiple Yemen attacks on its refineries earlier on.

At the end of a meeting between President Biden and Crown Prince Mohammed bin Salman of Saudi Arabia, an NBC News reporter, Peter Alexander, shouted “Jamal Khashoggi, will you apologize to his family?” Prince Mohammed and Biden ignored the question. https://t.co/aJWzG21P9T pic.twitter.com/PDyfPSwN1n

The whole action was merely an oily way to placate the US government from Muhammad bin Salman’s domestic affairs, and a way for the Biden government to satisfy its domestic Winter energy requirements… to be sold for sure at Putin induced inflationary prices, while keeping Saudi’s mutual interest with Russia and the latter’s goodwill for the Saudis intact — this is MbS hitting three birds with one stone. – CG

Nations across the Global South are taking advantage of the abundant supply of Russian oil in the market, just as the west faces a crippling energy crisis.

Saudi Arabia has more than doubled the amount of Russian oil it imported during the second quarter of 2022, fulfilling summer cooling demand and freeing up the kingdom’s own crude for export, according to data reviewed by Reuters.

Russian oil has been available at a discount in the wake of the severe economic sanctions imposed on Russia following its military invasion of Ukraine.

Intended to isolate Russia and cut its energy export revenues, the sanctions have instead created a severe energy crisis across the west.

Last month, inflation in the US reached a 40-year high, as runaway fuel prices batter the nation. Other NATO members, such as Germany, fear that entire industries could be destroyed after losing access to Russian fuel.

Meanwhile, many nations across the Global South have increased their imports of Russian oil and gas, taking advantage of its wide availability.

In the face of this crisis, US President Joe Biden is headed for Saudi Arabia hoping to ease tensions with Washington’s historic ally.

He is also expected to ask Saudi officials to increase their oil supply for global markets.

According to the data obtained by Reuters, Riyadh imported 647,000 tons of fuel oil from Russia via Russian and Estonian ports in April–June this year, up from 320,000 tons in the same period last year.

Imports of Russian fuel via the West Asian oil hub of Fujairah in the UAE also increased over recent months.

According to traders, Fujairah has received 2.1 million tons of Russian fuel so far this year, exceeding the 1.64 million tons for 2021.

Since the start of the NATO-instigated war between Russia and Ukraine, Washington’s main partners in the Gulf have ignored desperate pleas from western leaders to break with their OPEC+ commitments and increase oil production levels.

Saudi Arabia and the UAE have instead chosen to tighten their cooperation bonds with Russia.

According to a report in the Wall Street Journal earlier this week, despite welcoming Biden to the kingdom, Saudi officials are not expected to abandon their oil production partnership with Russia. – The Cradle, News Desk- July 15 2022