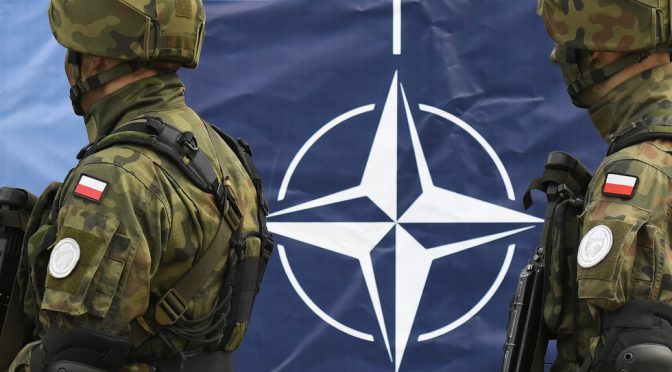 The world is currently changing so rapidly that the term ‘new normal,’ which first appeared in the business realm and later enriched diplomatic slang, has been added to the active vocabulary of not only all those who follow the news, but even those who don’t.

The NATO summit held in Madrid, last month, was rich in information, claiming to be one of the key political events of the summer of 2022. The gathering marked another milestone in relations between Moscow and Brussels, with the the continuing conflict between Russia and the West the main focus.

First, a new Strategic Concept for the bloc was released, in which Russia was publicly declared its main security threat. Secondly, the procedure for Sweden and Finland’s membership was officially launched, symbolically confirming the unity of the Euro-Atlantic camp. Thirdly, a number of measures and plans have been announced which are aimed at directly deterring Russia militarily.

These are all alarming signals that create a depressing impression for outsiders. The reaction of officials does not add optimism either. For example, in commenting on NATO’s 2022 Strategic Concept, Russia’s Deputy Minister of Foreign Affairs, Alexander Grushko, said “The very existence of a state like Russia is recognized as a serious threat to the alliance. This is a very serious turn and a real bid to confront us.”

It would seem that everything points to a ‘new normal’ in Russia-NATO relations. Naturally, questions arise: How did this happen? What will Brussels do in practice, and how will Moscow react? Can a strategic confrontation in the information field and the buildup of means of deterrence on both sides escalate into an open conflict?

However, if you look deeper, the fundamental answers are not as scary as they might seem.

How did this happen?

In fact, to properly interpret this ‘new normal’ in Russia-NATO relations, they must be analyzed from a chronological perspective.

Looking at the period since the collapse of the USSR and the end of the Cold War, Russia’s offensive in Ukraine is, indeed, an unprecedented scenario for European security. Naturally, NATO’s new strategic document differs from previous entries in the series. The 1991 concept noted a reduction in the security threat due to the change in the balance of power in Europe, but also noted the need to take the legacy of the Soviet Union’s military potential into account.

The 1999 edition characterized Russia, Ukraine, and the Republic of Moldova as partners for dialogue. The installment from 2010 finally attached strategic importance to relations with Russia and was aimed at deepening them on issues of mutual interest. Accordingly, if we compare the document from 2022 with its immediate predecessor, the ‘new normal’ really is new.

However, 12 years have passed since the adoption of the previous concept, during which NATO has faced internal crises and failures in achieving its goals, and Russia has moved to a more active foreign policy. Today’s apex in the confrontation between Moscow and Brussels sums up the events of this period. Russia’s complaints against NATO had already begun accumulating since the conflicts in the Balkans in the 1990s, and noticeably escalated after the 2008 summit in Bucharest, when Ukraine and Georgia were promised membership of the bloc. This criticism persisted, albeit implicitly, during NATO’s operation in Libya, as well as in the Syrian conflict.

The NATO summits that took place in Wales and Warsaw in 2014 and 2016 following the first Ukrainian crisis, in turn, formalized the beginning of the ‘securitization’ of Russia. In this context, the parties actually abandoned dialogue and suspended the work of the Russia-NATO Council at Brussels’ initiative. Despite attempts to revive the format and even use it in early 2022 to discuss Russian proposals for security guarantees, it became clear that the functionality and effectiveness of the Council had been reduced to zero. In the fall of 2021, Russia’s Permanent Mission to NATO, the Information Bureau, and the bloc’s Military Liaison Mission in Moscow also suspended their work. In the absence of these channels of communication and, in fact, any real purpose for them, Russian Foreign Minister Sergey Lavrov succinctly characterized Moscow’s relations with Brussels as “non-existent.”

herefore, if we compare the reality after the Madrid summit with the development of events before it, the ‘normal’ is the same… only more clearly formulated.

What will Brussels do and what will Moscow do?

Once the ‘i’s are dotted and the important words delivered, things become clearer. Today’s reality makes it easier for both parties to understand the logic of their opponent, as well as thei behavior in the future, to a certain extent. In the current situation, the decisions announced by NATO confirm the bloc’s return to a Cold War regime.

Its leadership signaled this move by announcing the deployment of additional troops in the East and its readiness to continue providing military assistance to Ukraine, as well as by increasing the frequency and intensity of military exercises and ramping up the modernization of its military-industrial complex. It is obvious that, in the medium term, the bloc will focus on fortifying its eastern and southern borders in order to contain Russia.

If Finland and Sweden successfully complete the process of accessiom, the format NATO chooses to secure its borders with Russia, which remains unknown, will be key in terms of Moscow’s reaction. There are two groups of issues here – related to conventional and strategic weapons.

With regard to conventional weapons, either US forces or multinational battalions like those operating in Poland and the Baltic States may be deployed to bolster Sweden’s and Finland’s national troops. The probability of the second option is higher since the leaders of the Nordic countries themselves have spoken out against the first. In this case, significant effort will be required from the Russian side to deploy additional forces and equipment along its border with Finland, as well as to modernize its military infrastructure in the adjacent Karelia and Murmansk regions. In the Baltic Sea, the coexistence of both Russian and NATO fleets would be problematic (since all states with access may soon be members of the alliance) and require updating, confidence-building and incident prevention measures.

The expert community is also discussing the prospects of deploying medium- and short-range missiles, as well as nuclear weapons and anti-missile defense systems, on NATO’s new flank. This would already require a rearrangement of Russia’s strategic weapons and add a new dimension to the issue of the militarization of the Arctic, creating a significant challenge for Moscow’s strategic security. Nevertheless, it would be a very risky step on the part of the bloc to deliberately encourage further escalation in its relations with Russia, so the governments of the Nordic countries have dismissed the likelihood of such a scenario so far.

According to statements from Russia’s Foreign Ministry, any steps taken by NATO will be thoroughly analyzed by the Russian military, which means the ball is now in Russia’s court. But one way or another, from a practical standpoint, the events currently taking place demonstrate that the ‘new normal’ in Russia-NATO relations is actually very old… one that stood the test of time in a bygone era.

Will there be a war?

But there is potentially good news, too. Despite the seriousness of the steps taken by the bloc, given the historical analysis above, the ‘new normal’ that will form the basis of Russia-NATO relations in the foreseeable future won’t have come as a surprise to Russia’s military and political elites, so it will not require any fundamental shift in thinking on Moscow’s part.

When the dialogue moves from political and diplomatic arenas to the military realm, it often becomes more concrete and pragmatic. An important point in the statement from the Madrid summit is the preservation of the 1997 Founding Act on Russia-NATO Relations, despite the fact that Russia had been accused of violating it the day before. This indicates that the parties are not ready to completely abandon security guarantees and engage in open conflict. The same idea was expressed by NATO Secretary General Stoltenberg.

While the fighting in Ukraine is in an active phase, the parties will remain vague, determining what measures must be taken to adequately secure their borders without openly challenging the security of their opponents. As soon as the hostilities end and a post-conflict model emerges, when new troops appear on Russia’s borders and the details of Finland’s and Sweden’s accession become clear, further dialogue will inevitably be devoted to finding ways to de-escalate, since a peak in tensions is always followed by a decline.

There is another reason it is not beneficial for NATO to engage in open conflict with Moscow or concentrate all of its resources on its border with Russia. As was confirmed by the decisions taken during the course of the Madrid summit, the big confrontation of the future won’t be concentrated in Europe at all, but in the Asia-Pacific region. And if the United States and its allies need resources to counter China very soon, the bloc simply cannot afford to use them all in an open conflict with Russia.