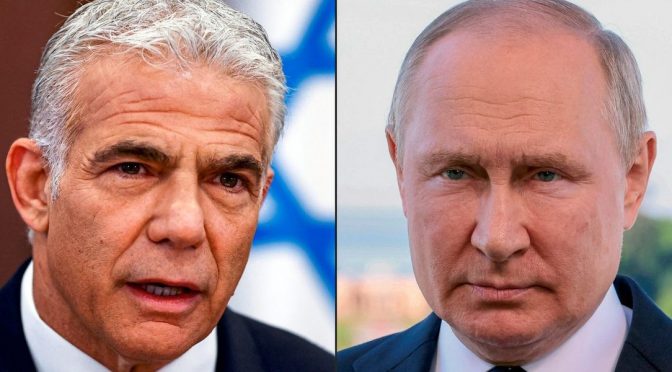 The Jewish Agency is Israel’s life source and the Kremlin shut it down this month. The fallout may be a measurable schism between Moscow and Tel Aviv, in which the latter has a lot to lose.

A row has erupted in Russian-Israeli relations over the functioning of the Jewish Agency in Moscow. The Jerusalem Post first reported on 5 July that Moscow had ordered the Jewish Agency to cease all operations in Russia, in a formal letter from the Russian Justice Ministry “earlier this week.”

The Jewish Agency initially played down the development in a statement which said, “As part of the work of the Jewish Agency’s delegation in Russia, we are occasionally required to make certain adjustments, as required by authorities. Discussions with the authorities are ongoing with the aim of continuing our activities in accordance with the rules. Even now, there is a dialogue.”

An unnamed senior Israeli diplomat told the Jerusalem Post, “Russia is saying the Jewish Agency illegally collected info about Russian citizens… We will bring up the Jewish Agency [with Russian authorities] and address it in an organized way. It will be taken care of at the embassy level. We don’t totally understand the reasoning [of the request to stop Jewish Agency’s activities in Russia].”

However, on 11 July, the Russian news agency RIA Novosti disclosed that a four-week long audit of the Sohnut (as the Jewish Agency is known in Russia) by the Ministry of Justice of the Russian Federation had been underway since 30 May, within the purview of the federal law on “Non-Commercial Organizations.”

The Ministry of Justice conveyed to RIA Novosti that on the basis of the results of the audit, “an act was prepared, which has been sent to the address of the location of the organization (Sohnut).”

Since then, to borrow the metaphor from the Old Testament, the cloud “as small as a man’s hand rising from the sea” when Elijah first saw it, has swiftly turned into a storm. On July 21, Russia’s TASS news agency reported that the Basmanny District Court of Moscow received on that day a lawsuit from the Russian Ministry of Justice requesting that the Russian branch of the Jewish Agency for Israel be liquidated. The grounds for the suit were not provided.

The Jewish Agency has a larger-than-life stature and is closely connected to, albeit not funded by, the Israeli government. It is an international organization that fosters links between Jews across the world and Israel and promotes the immigration of Jews to Israel, a process known as “Aliyah.”

The Jewish Agency is closely connected with American Jewish organizations. Billionaire Mark Wilf, who was elected as the new chairman of the board of the Jewish Agency for Israel on 10 July, was previously the chair of The Jewish Federations of North America’s board of trustees and closely associated with a variety of educational and philanthropic boards in both the United States and Israel.

Make no mistake, the Kremlin would have weighed the pros and cons carefully before deciding to shut down the Sohnut’s operations in Russia, which launched in 1989 when under heavy US pressure, then Soviet leader Mikhail Gorbachev agreed to open the doors for the emigration of Jews to Israel as quid pro quo for western economic aid.

There would have been compelling reasons, for sure, for the Kremlin to take such a decision. It appears that the justice ministry in Moscow is in possession of incriminatory documents. The Jewish Agency would have been under the scanner for some time before the decision to crack the whip.

The emigration of Jews is of course a highly sensitive issue for the state of Israel (and the powerful Jewish lobby in America). On Sunday, the Israeli paper Algemeiner underscored that Tel Aviv is very much seized of the matter. Indeed, the country is also heading for a crucial legislative election on 1 November.

Prime Minister Yair Lapid said after a meeting of ministers on Sunday, “Closing the Jewish Agency offices would be a serious event that would affect relations.”

Lapid added, “The Jewish community in Russia is deeply connected to Israel and its importance increases in any political conversation with the Russian leadership. We will continue to operate through the diplomatic channels, so that the important activities of the Jewish Agency will not be stopped.”

A delegation of Israeli officials is leaving for Moscow this week. Lapid does not have the wherewithal to operate skillfully in the Kremlin, as did his predecessor Benjamin Netanyahu. Lapid’s focus is on the Biden administration, but in such tricky situations, it does not add to Israel’s aura in Moscow that it wields influence in Washington.

Russia is cracking the whip at a very sensitive time. An Israeli prime minister who cannot serve the interests of the Jewish diaspora is not exactly glorifying himself in domestic politics.

Indeed, this development has nothing to do with bigotry against Jews. During Netanyahu’s regime, Putin use to associate himself personally with Jewish events in Israel. Putin was conscious of the influential ethnic Jewish community who migrated to Israel and considered them to be part of the motherland and an asset for Russia.

Conceivably, Russia’s national security interests are involved here. According to the World Jewish Congress, Ukraine is home to between 56,000 and 140,000 Jews. Ukrainian Jews are prevalent throughout Ukrainian society, including high offices of the state, President Volodymyr Zelensky himself being one of them.

As for Russia, the Jewish population is estimated at around 165,000, making them the sixth-largest Jewish community outside of Israel. The Jewish communities in Ukraine and Russia have kinship historically. Possibly, the hostile anti-Russian stance of the Israelis and Ukrainians touched raw nerves in Moscow. The Israeli press has reported about “volunteers” leaving for Ukraine to fight Russian forces.

The Israel government pretends to be “neutral” but then, it is a member of US Defense Secretary Lloyd Austin’s “coalition of the willing” fighting Russian forces in Ukraine.

Call it a trapeze or balancing or double-crossing act, but Moscow cannot afford to ignore the ground realities, given the nexus between the US and Israeli intelligence. Succinctly put, the possibility exists that the Jewish Agency operatives in Russia  have had covert liaison with the US intelligence.

From February-March, Moscow began uprooting all vestiges of US intelligence from Russian soil, including Carnegie’s Moscow Centre. It is entirely conceivable that the CIA had a “back-up” plan and “sleeper cells” in Russia handled through associates. The fact remains that the Jewish Agency also has an office in Kiev and Israeli military runs a hospital for treating wounded Ukrainian soldiers. Of course, Ukraine’s spy agency is also very active. All things taken together, the Russian intelligence possibly caught up with the nexus.

The deterioration of Russian-Israeli relations is happening at a time when regional security in West Asia is in transition. On a broader plane, this is also a transformative period in the geopolitics of the region. The fact that Biden was roundly snubbed in Jeddah when he tried to sell the idea of an anti-Russia, anti-China regional alliance speaks for itself.

Therefore, in this spat, Israel will be the loser. As for Russia, one potential irritant in its ties with Iran — Russian-Israeli equations in Syria — is getting removed. This could measurably impact the situation in Syria, which Israel has been bombing, unprovoked, since 2017. Russia has cast its net wide in West Asia and its diplomatic successes are not going to be affected because of this falling out with Israel.

Israel should have acted early enough when Elijah’s small cloud, “as small as a man’s hand” was spotted in May when the Russian inspectors arrived at the doorstep of the Jewish Agency in Moscow. Tel Aviv probably didn’t expect things to snowball.

Clearly, the Israeli reflex was to hush up. That shows nervousness that Russian intelligence has caught up with something highly unsavoury.

Ambassador MK Bhadrakumar was a career diplomat for three decades in the Indian Foreign Service with multi-year assignments in the former Soviet Union, Pakistan, Iran, Afghanistan and Turkey. MK writes extensively on the geopolitics of Eurasia, China, West Asia and US strategies.

One thought on “With Eye on the CIA, Moscow Cracks the Whip at Israel”