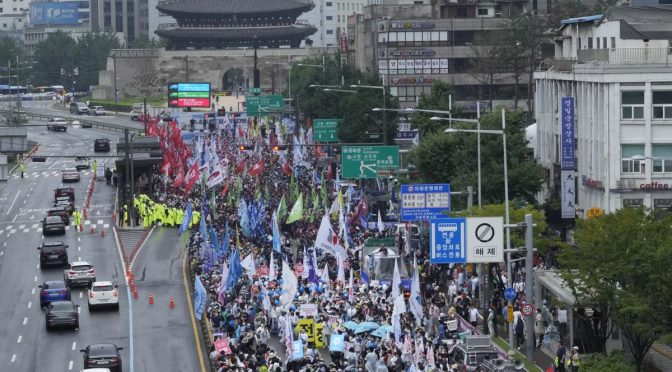 In America these days, almost any information about North Korea, be it rumor, fake news, or just plain silly, becomes fodder for the mainstream media. From TMZ to The Guardian, reporters know there is an insatiable appetite for anything that puts Kim and his regime in a bad or crazy light.

But when it comes to South Korea, which hosts 28,500 American ground troops and the Pentagon’s largest military base outside of North America, U.S. media coverage is, shall we say, highly selective. That was made resoundingly clear on August 14, when Seoul was the scene for the largest public demonstration in decades against the U.S. military presence in South Korea.

Amazingly, not a word about the protest appeared in the U.S. media.

That Saturday, thousands of people chanting “this land is not a U.S. war base” demonstrated against Ulchi Freedom Shield, the first large-scale military exercises between U.S. and South Korean forces since 2017. The protests were organized by the Korean Confederation of Trade Unions (KCTU), South Korea’s second-largest labor federation. They were joined by a range of progressive allies, including People’s Solidarity for Participatory Democracy (PSPD), an influential citizen’s group founded in 1994.

“At a time when military tensions on the Korean Peninsula are escalating and there is no clue for inter-Korean dialogue, we are concerned that an aggressive large-scale military exercise will exacerbate the situation,” PSPD declared. “We once again urge the US and ROK governments to suspend the ROK-US joint military exercise and make efforts to create conditions for dialogue.” At the demonstration, protesters took direct aim at the heart of U.S. policy in Korea, with signs that read “No war rehearsal, No U.S.” and “No Korea-U.S.-Japan military cooperation.”

Outside of the Korean press, the only outlets to cover this massive showing against militarism were Iran’s Press TV and China’s CGTN, which provided extensive video of the mobilization. The single print story on the march appeared in Xinhua, China’s daily wire service. Neither the New York Times or the Washington Post, which often set the pace for U.S. press coverage of Asia, deemed the demonstration newsworthy.

Hypocrisy? Yes. As I put it in a sardonic tweet, “Every rumor, fake news, intelligence leak or eyebrow twitch about Kim Jong Un and North Korea gets star treatment in the US media.” Yet, when “thousands of SOUTH KOREANS” march in Seoul against US-ROK war games, “NOT ONE PEEP.” The contrast seemed to hit a nerve: by the weekend, nearly 6,000 Twitter users had “liked” my post and over 2,000 had retweeted it.

The contradictions were evident on Twitter itself. As it often does with countries we’re not supposed to like, it slapped a label on one of my posts about the demonstration, urging users to “stay informed” because “this Tweet links to a Iran state-affiliated media website.” With that warning, Twitter was effectively delegitimizing my own coverage of the demonstration.

To be fair, political rallies on the left and right are a common occurrence in South Korea; obviously, editors and reporters must make choices about what to cover. But in a country where a majority of its citizens support the presence of U.S. forces and a U.S. general has operational control over their army in times of war, a rally of several thousand citizens openly calling for a U.S. troop withdrawal is certainly newsworthy.

At the same time, the drills have been a hot topic for years. In 2018, with much of Washington opposed, they were downgraded to computerized simulations as a way to build trust during the denuclearization talks between President Donald Trump and North Korean Chairman Kim Jong Un. Those talks collapsed in 2019, primarily over Trump’s refusal to lift U.S. sanctions in return for a partial shut down of the North’s nuclear infrastructure.

This year, with North Korea regularly testing its long-range missiles, the new presidents in Washington and Seoul, Joe Biden and Yoon Suk Yeol, decided to resume the real-life exercises. The air, land, and sea drills, which in the past have mobilized around 50,000 South Korean and 17,500 U.S. soldiers, began on August 22 and wind up on September 1.

Sadly, the discrepancies in coverage reflect old patterns going back to the early days of the Cold War.

Currently, both parties see in the North a determined and dangerous long-term foe, and in the South a reluctant ally torn between loyalty to the United States and its expansive economic ties with China, America’s new nemesis. In this world, there is little room for coverage of South Korean trade unionists, leftists, and progressives who stand against the American consensus.

That mindset was recently on display at the Post when it praised South Koreans for electing Yoon, an inexperienced conservative hawk who said during his campaign that he might consider a pre-emptive strike on North Korea “to protect peace” on the peninsula. “South Korea makes a welcome turn toward the U.S. — just when it is really needed,” the headline crowed. The Post editorial also took a nasty swipe at former President Moon Jae-in, parroting right-wing talking points that he had “consciously” played down North Korea’s human rights record and “balked” at adding new batteries to the American THAAD missile deployment that has drawn Beijing’s ire.

For America’s papers of record, the failure to cover South Korea’s progressive left also reflects a failure of nerve. The KCTU and People’s Solidarity that organized this month’s antiwar demonstration have deep roots in the democratic movement of the late 1980s, when years of struggle culminated in the massive demonstrations of 1987 that forced the pro-U.S. generals who had ruled the South for 26 years to step aside.

During that tumultuous era, both the Times and the Post offered extensive (and often outstanding) coverage of dissidents and government repression. But in recent years, they have been far more interested in covering North Korean defectors and warning the public (repeatedly) about a possible underground nuclear test than exploring the complex internal politics of South Korea.

Ironically, these papers are better prepared now to cover Korea than any time in the past 40 years. Since 2020, they have built large bureaus in South Korea and relocated their Asian news hubs from Hong Kong to Seoul, giving them an opportunity for first-class coverage of perhaps the most dynamic country in Asia. “Looking at a five, 10, 20 year horizon, [Seoul] just feels like it’s right in the middle of the action,” Stephen Dunbar-Johnson, the Times’sinternational president, recently told the Korea Joongang Daily.

But in this coverage, the opinions and views of all Koreans need to be heard. That is particularly true when dealing with an issue as critical as the U.S.-Korean alliance, which President Biden has called “a linchpin of peace, stability, and prosperity” but many Koreans now view as a barrier to their country’s future.