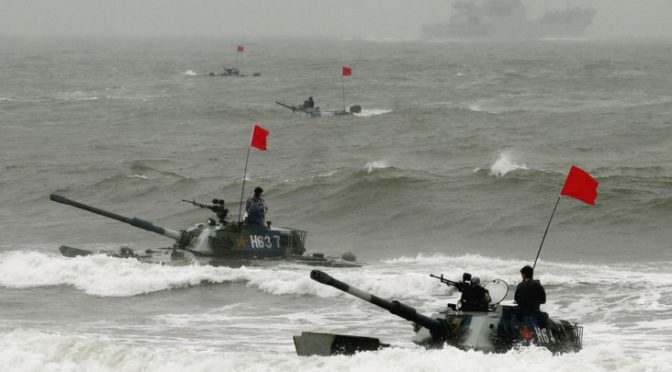 Washington always justifies economic sanctions by evoking a military or security threat against either the US or any one of its allies. Then it actively works to prove the legitimacy of the threat – or to create the illusion thereof.

One such instance involved House Speaker Nancy Pelosi’s trip to Taipei over the summer, which was a gratuitous provocation of China at a time when the US is actively involved in arming, training, and funding fighters against Russia in the Ukraine conflict.

The US is considering sanctioning China as a deterrent from attacking Taiwan, according to media reports.

This same blueprint for ramping up tensions against Washington’s geopolitical foes has been used all over the world, from Latin America to the Middle East.

The formula is simple. Find and support opposition groups or governments, either within the target countries or on their border, who are willing to do Washington’s bidding in exchange for benefits (or promises thereof). If the target country reacts, it’s qualified by the West as a “crackdown” or an attack, both of which conveniently open the door for the deployment of various tools in the Western arsenal for global hegemony – all in the name of defending freedom, democracy, and human rights, of course.

Washington officials were fully aware that Pelosi’s trip to Taiwan ran a high risk of eliciting a military response from China. Any such reaction would have been exploited by the West – which Beijing undoubtedly understood when it refused to take the bait. But that hasn’t stopped the US from forging ahead anyway in considering punitive sanctions as though China’s restraint hasn’t just been tested and proven, or that official US policy didn’t in fact officially recognize that Taiwan is indeed part of China. Washington seems intent on leveraging its long-standing defense agreement to sell weapons to Taipei to make it look as though Taiwan is a separate country that needs to defend itself against China when in reality it’s not recognized as sovereign by the United Nations, the US, or international law.

And now Washington is building the narrative that Taiwan is the new Ukraine — the scrappy little guy standing up to the giant next door who needs Captain America to come to his rescue. Those optics have allowed Washington to sell $1.1 billion worth of weapons to Taiwan, in the wake of a previous $2.37 billion order in 2020 that has yet to be fulfilled as part of a $14 billion backlog.

President Joe Biden’s administration is reportedly also working on a sanctions package that would hit the Chinese consumer technology manufacturing sector, according to Reuters, citing the complexities of global supply chain entanglements with the US economy. It seems that sanctions are always the endgame for Washington, in the same way that foreign military interventions are ultimately about boosting the US economy through the military industrial complex or the eventual implantation of US economic interests.

Sanctions also tilt the global economic playing field in Washington’s favor by deterring nations whose companies do business with the US or in US dollars from engaging with US-sanctioned countries. Even the EU, a close ally, routinely finds itself having to abandon trade relationships or ambitions – with Russia, Iran, and Cuba, for example – as a result of US sanctions pressure.

The impact of anti-China sanctions on the EU would be devastating, particularly in light of the economic blow that the bloc has already taken from anti-Russian sanctions slapped on its own cheap Russian energy supply as a result of being egged on by Washington to stand in solidarity with Ukraine. China is one of Germany’s top customers, and Berlin is already facing near-deindustrialization as a result of the anti-Russian sanctions impact on its industrial sector.

Washington has previously issued exemptions to its own restrictions for American entities. For instance, even in the case of its sanctions on Moscow, “the U.S. is issuing a number of “authorized-transaction notices and general licenses” to shield some corporate targets from the harsh economic measures contained in the sanctions,” according to a LexisNexis report.  But the path to any such US sanctions exemption for foreign entities is less clear.

In the case of Russian oil, for example, the EU is dependent on the good graces of Washington if it wants to keep importing US-sanctioned Russian fuel. So basically Washington can use the restrictions to control and dictate trade in the EU and beyond. Unless, of course, enough countries get fed up with it and seek out an alternative system. Which is exactly what seems to be evolving in the wake of the West’s Ukraine-related sanctions, with Russia, China, Iran, and the global south deepening cooperation that could ultimately bypass the Western financial sphere.

It’s hardly surprising that the China sanctions talk comes in the wake of a US State Department visit to Mexico City this month, to pitch Mexican semiconductor manufacturing as part of a $50 billion investment that would facilitate US independence from the approximate $1 billion worth of semiconductors that America imports annually from China.

The US is working to secure its own interests – as every country should. It’s clearly willing to pull out every stop to maximize its global competitiveness.

Perhaps one of these days its allies will start following suit and doing strictly what’s best for themselves and their own citizens, even if it means diversifying their interests away from Washington’s.