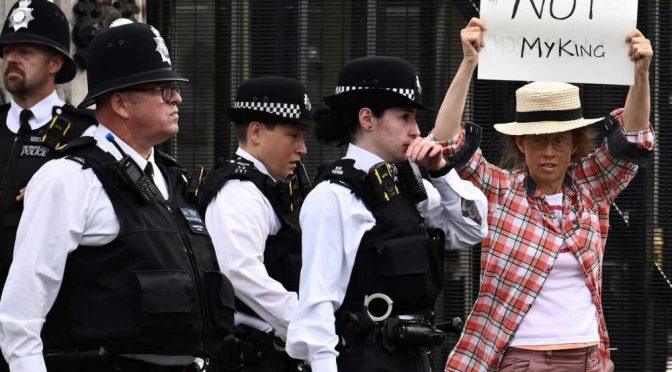 The right to protest, fragile and meekly protected by the judiciary in Britain’s common law tradition, did not really hold much force till European law confirmed it.  In the UK, condemning other countries for suppressing rights to protest is standard fare.

So it was with some discomforting surprise – at least to a number of talking heads – that people were arrested for protesting against the monarchy after the passing of Queen Elizabeth II.

Such surprise is misplaced.  In the UK, protestors can be marched away before the operation of vast, and vague discretionary powers wielded by the police.  An old, ancient favourite is the breaching of the peace, something many a blue-clad officer is bound to see in any gathering of human beings.

In addition to that general power available to the police, the Public Order Act 1986 UK also covers public order offences.  Section 5 enumerates instances where a person is guilty of such offences: where “they use threatening or abusive words or behaviour or disorderly behaviour or disorderly behaviour” or display “any writing, sign or visible representation which is threatening or abusive.”

An additional, emotive ingredient is also added to the legislation.  Such conduct should take place “within the hearing or sight of a person likely to be caused harassment, alarm or distress thereby.” During times of government declared mourning, the abuse of such wording is nigh boundless, despite the imprecise defence of “reasonable accuse” available to the accused party.

It is precisely in such wording that suppression of protest can take place with relative ease.  The conditions of grieving were so utterly total in the aftermath of Princess Diana’s death as to be sinisterly oppressive.  The slightest show of disagreement with the grievers was treated as abnormal and offensive.  It was, as Jonathan Freedland wrote, “our collective moment of madness, a week when somehow we lost our grip.”

The police can count upon another weapon in their already vast armoury of quelling protest.  The latest Police, Crime, Sentencing, and Courts Act of 2022 is yet another tool, adding “noise-related” provisions.  It grants police powers to limit public processions, public assemblies and one-person protests “where it is reasonably believed that the noise they generated may result in serious disruption to the activities of an organisation carried on in the vicinity or have a significant impact on people in the vicinity of the protest.”

The public nuisance element in the legislation is also troubling.  Police powers are granted to enable arrest and charging of individuals responsible for knowingly or recklessly doing something that risks or causes serious harm to the public.  This also covers obstructions to the public “in the exercise or enjoyment of a right that may be exercised or enjoyed by the public at large”.  The legislation defines serious harm as death, personal injury or disease; loss of, or damage to, property, or; serious distress, serious annoyance, serious inconvenience or loss of amenity.”

While the degree of mourning for the Queen’s passing has lacked the intense and grotesque mawkishness shown at Diana’s death, those wishing to sport a different view have also been singled out for their dissent.  There are a good number who see little merit in the monarchy continuing and have expressed disagreement with the new occupant.  One anti-Royal protester, holding the sign “Not My King” in a peaceful and dignified manner, was removed by police in an incident that caused a flutter of concern.

A protestor in Edinburgh was also arrested for holding up the somewhat spicier “Fuck imperialism, abolish monarchy” placard in front of St. Giles Cathedral.  According to a police spokeswoman, the arrest was made “in connection with a breach of the peace”.  Conservative commentator Brendan O’Neill saw it rather differently, calling it “an alarming, almost medieval act of censorship” and “an intolerable assault on freedom of speech.”

Despite initiating a number of arrests the Metropolitan Police insist, as they tend to, that, “The public absolutely have a right to protest and we have been making this clear to all officers involved in the extraordinary operation currently taking place.”

For those believers in Britannic exceptionalism, this was disturbing.   It troubled University of East Anglia academic David Mead, who found it difficult to identify “what criminal offences protesters might have committed by shouting ‘not my king’ or ‘abolish the monarchy’ as the royal procession of the casket made its way along the streets”.

Mead poses a few questions.  Was there threatening or abusive language likely to cause harassment, alarm or distress within the meaning of the Public Order Act?  Seemingly not.  Were the chants or placards in question threatening or abusive?  Again, the case did not stack up.  Even the public nuisance charge would fail to stick.

Perhaps the only ground left was that unclear power of taking proportionate action to prevent breaches of the peace.  Even in an absence of violence, the police might still decide that violence to a person or property might imminently arise.  Best step in before it’s too late.

This is hardly a satisfactory state of affairs, showing, yet again, that the Sceptred Isle can hardly be counted as an impregnable bastion of free speech and public dissent.  “If people are not allowed to quietly, if offensively, protest against the proclamation of a king,” reflects O’Neill, “then clearly our country is not as free as we thought.”

Dr. Binoy Kampmark was a Commonwealth Scholar at Selwyn College, Cambridge.  He currently lectures at RMIT University.  He is a regular contributor to Global Research and Asia-Pacific Research. Email: [email protected]