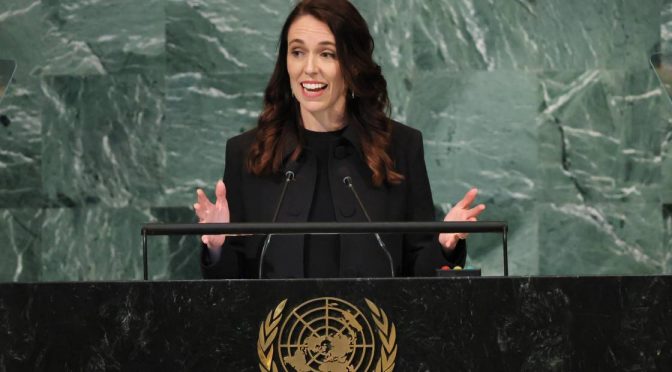 Speech regulation has become an article of faith on the left. Ardern used her speech this week to the United Nations General Assembly to call for censorship on a global scale.

Ardern lashed out at “disinformation” and called for a global coalition to control speech. After nodding toward free speech, she proceeded to lay out a plan for its demise through government regulation:

But what if that lie, told repeatedly, and across many platforms, prompts, inspires, or motivates others to take up arms. To threaten the security of others. To turn a blind eye to atrocities, or worse, to become complicit in them. What then?

This is no longer a hypothetical. The weapons of war have changed, they are upon us and require the same level of action and activity that we put into the weapons of old.

We recognized the threats that the old weapons created. We came together as communities to minimize these threats. We created international rules, norms and expectations. We never saw that as a threat to our individual liberties – rather, it was a preservation of them. The same must apply now as we take on these new challenges.

While referring to a global censorship coalition as a “light-touch approach to disinformation,” Ardern revealed how sweeping such a system would likely be. She defended the need for such global censorship on having to combat those who question climate change and the need to stop “hateful and dangerous rhetoric and ideology.”

“After all, how do you successfully end a war if people are led to believe the reason for its existence is not only legal but noble? How do you tackle climate change if people do not believe it exists? How do you ensure the human rights of others are upheld, when they are subjected to hateful and dangerous rhetoric and ideology?”

That is the same rationale used by authoritarian countries like China, Iran, and Russia to censor dissidents, minority groups, and political rivals.  What is “hateful” and “dangerous” is a fluid concept that government have historically used to silence critics or dissenters.

Ardern is the smiling face of the new generation of censors. At least the old generation of censors like the Iranians do not pretend to support free speech and openly admit that they are crushing dissent. The point is that we need to be equally on guard when censorship is pushed from the left with the best of motivations and the worst of means.

As the great civil libertarian Justice Louis Brandeis once said, “the greatest dangers to liberty lurk in insidious encroachment by men of zeal, well-meaning but without understanding.”

Professor Jonathan Turley is a nationally recognized legal scholar who has written extensively in areas ranging from constitutional law to legal theory to tort law. He has written over three dozen academic articles that have appeared in a variety of leading law journals at Cornell, Duke, Georgetown, Harvard, Northwestern, University of Chicago, and other schools.