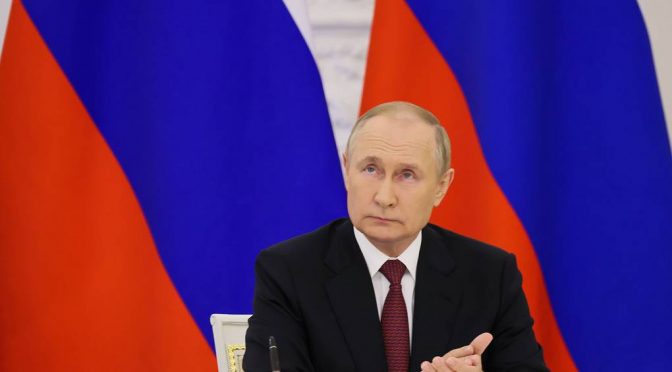 The recent ceremony of accession of four Ukrainian regions to Russia brought a speech from President Putin that outlined the reasons behind Russia’s current struggles, the character and identify of its foes and, more importantly, laid the groundwork for Russia’s next level of confrontation with the West beyond the ongoing military conflict in Ukraine.

In his speech, Putin clearly defined the present fight as a worldwide battle in which Russia plays a leading role against the Deep State that ultimately runs the West and which uses all available tools – including military, economic, cultural, and social – in its attempt to preserve unipolar world domination.

Putin’s words were directed to three distinctive audiences: the collective West, the Global South and Russia. He went back to Middle Ages history to remind the origins and impact of Western resource exploitation and colonialism in the Americas, Asia and Africa through imperialistic wars, racism, and slavery.

He touched upon the military exploits of the 20th century led primarily by the US and its allies and its impact in Germany and Japan at the end of the Second World War, Korea in the 1950s, Vietnam in the 1960-70s and its latest failed adventures in Iraq, Libya, Syria, and Afghanistan. He also highlighted the dire days of Russia during the 1990s and the Western powers’ attempts to turn it into a dismembered and passive cheap natural resources outlet.

Putin’s message to Russians had nationalistic and religious tones, touching on the defence of traditional family values as a call to arms against the threat caused by dwindling population growth. He also named US monetary printing as one of the key tools used by the Western establishment to achieve its self-preservation and supremacy goals, reminding that paper doesn’t feed nor warms human beings.

It would be tempting to see this speech narrowly as just another manifestation of Russia’s position in the big geopolitical battles, but what Putin has done is setting international rivalry in deep historical and cultural terms which have an undoubted appeal across the globe. Critics will see Putin’s benign characterization of Russia as a cynical ploy that hides the country’s role, through its commanding post in the Soviet Union, in the subjugation of Eastern European countries after World War II, but nevertheless the Global South will see things differently.

Putin’s scathing attack against the West is a multi-headed weapon as it rallied to the conservative segments of a population dismayed by globalism imposing a deeply disturbing agenda that goes against traditional views on family, marriage and sex, but it also has leftist tones, as his criticism also goes against the same globalism that is worsening wealth disparity, and even a libertarian appeal as he referred to the imposition of states of emergency, media control and sanctions on other societies as examples of Western made totalitarianism.

Putin’s primary target was the Anglo-Saxon establishment, mainly the US and Great Britain, and he attempted to build a wedge within the West as he focused on sovereignty, a cry with resonance in countries like Hungary and Italy, and on traditional anti-war sentiments in Germany and Japan by remembering the horrors of the World War II bombings in Dresden, Hamburg, Cologne, Hiroshima, and Nagasaki.

An immediate consequence of Putin’s rhetorical escalation will be increased US pressure on the Global South to follow anti-Russian sanctions.  To successfully counter this menace, and as Russia needs its continuous support, it will have to combine ideology with pragmatic and tangible support in terms of access to critical energy and food resources to the poorer countries.

The recent abstentions of China, India and Brazil on a UN Security Council resolution calling for condemnation of the Ukraine referenda no doubt were driven by these countries’ expectations on Russia’s future actions.

Following the end of the Cold War and the collapse of the Soviet Union, and as it gradually abandoned socialism, Russia lost the powerful ideological appeal that it had during decades in the Global South and in the West’s anti-establishment segments.  The most remarkable aspect of Putin’s recent speech is bringing back ideological confrontation into the forefront. This new battle looks to present the West’s defence of democracy, freedom, and sovereignty as hollow and hypocritical.

A combined message of anti-colonialism and conservatism is a powerful tool but Putin’s indirect and subtle appeal to people power as the only way to finally counter the Deep State is even stronger. Putin’s identification of the Deep State as humanity’s foe may be his ultimate ideological legacy, something avoidable if the US would have resigned itself to be just a normal country and to focus primarily on its people’s prosperity.