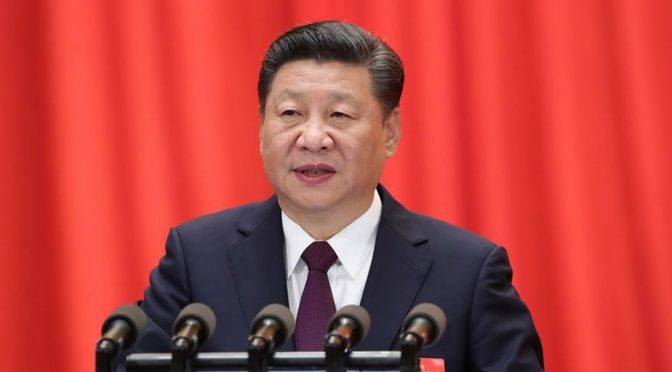 President Xi Jinping’s work report at the start of the 20th Congress of the Communist Party of China (CPC) this past Sunday in Beijing contained not only a blueprint for the development of the civilization-state, but for the whole Global South.

Xi’s 1h45min speech actually delivered a shorter version of the full work report – see attached PDF – which gets into way more detail on an array of socio-political themes.

This was the culmination of a complex collective effort that went on for months. When he received the final text, Xi commented, revised and edited it.

In a nutshell, the CPC master plan is twofold: finalize “socialist modernization” from 2020 to 2035; and build China – via peaceful modernization – as a modern socialist country that is “prosperous, strong, democratic, culturally advanced, and harmonious” all the way to 2049, signaling the centenary of the foundation of the People’s Republic of China (PRC).

The central concept in the work report is peaceful modernization – and how to accomplish it. As Xi summarized, “It contains elements that are common to the modernization processes of all countries, but it is more characterized by features that are unique to the Chinese context.”

Very much in tune with Confucian Chinese culture, “peaceful modernization” encapsulates a complete theoretical system. Of course there are multiple geoeconomic paths leading to modernization – according to the national conditions of any particular country. But for the Global South as a whole, what really matters is that the Chinese example completely breaks with the western TINA (“there is no alternative”) monopoly on modernization practice and theory.

Not to mention it breaks with the ideological straitjacket imposed on the Global South by the self-defined “golden billion” (of which the really “golden” barely reach 10 million). What the Chinese leadership is saying is that the Iranian model, the Ugandan model or the Bolivian model are all as valid as the Chinese experiment: what matters is pursuing an independent path towards development.

How to develop tech independence

What China proposes echoes across the Global South because Beijing is the largest trade partner of no less than 140 nations, who can easily grasp concepts such as high-quality economic development and self-reliance in science and technology.

The report stressed the categorical imperative for China from now on: to speed up technology self-reliance as the Hegemon is going no holds barred to derail China tech, especially in the manufacturing of semiconductors.

In what amount to a sanctions package from Hell, the Hegemon is betting on crippling China’s drive to accelerate its tech independence in semiconductors and the equipment to produce them.

So China will need to engage in a national effort on semiconductor production. That necessity will be at the core of what the work report describes as a new development strategy, spurred by the tremendous challenge of achieving tech self-sufficiency. Essentially China will go for strengthening the public sector of the economy, with state companies forming the nucleus for a national system of tech innovation development.

On foreign policy, the work report is very clear: China is against any form of unilateralism as well as blocs and exclusive groups targeted against particular countries. Beijing refers to these blocs, such as NATO and AUKUS, as “small fortresses with high walls.”

This outlook is inscribed in the CPC’s emphasis on another categorical imperative: reforming the existing system of global governance, extremely unfair to the Global South. It’s always crucial to remember that China, as a civilization-state, considers itself simultaneously as a socialist country and the world’s leading developing nation.

The problem once again is Beijing’s belief in “safeguarding the international system with the UN at its core.” Most Global South players know how the Hegemon subjects the UN – and its voting mechanism – to all sorts of relentless pressure.

It’s enlightening to pay attention to the very few westerners that really know one or two things about China.

Martin Jacques, until recently a senior fellow at the Department of Politics and International Studies at Cambridge University, and author of arguably the best book in English on China’s development, is impressed by how China’s modernization happened in a context dominated by the west: “This was the key role of the CPC. It had to be planned. We can see how extraordinarily successful it has been.”

The implication is that by breaking the west-centric TINA model, Beijing has accumulated the tools to be able to assist Global South nations with their own models.

Jeffrey Sachs, director of the Center for Sustainable Development at Columbia University, is even more upbeat: “China will become a leader of innovation. I very much hope and count on China becoming a leader for innovation in sustainability.” That will contrast with a ‘dysfunctional’ American model turning protectionist even in business and investment.

Mikhail Delyagin, deputy chairman of the Russian State Duma Committee on Economic Policy, makes a crucial point, certainly noted by key Global South players: the CPC “was able to creatively adapt the Marxism of the 19th century and its experience of the 20th century to new requirements and implement eternal values with new methods. This is a very important and useful lesson for us.”

And that’s the added value of a model geared towards the national interest and not the exclusivist policies of Global Capital.

Implied throughout the work report is the importance of the overarching concept of Chinese foreign policy: the Belt and Road Initiative (BRI) and its trade/connectivity corridors across Eurasia and Africa.

It was up to Chinese Foreign Ministry spokesperson Wang Wenbin to clarify where BRI is heading:

“BRI transcends the outdated mentality of geopolitical games, and created a new model of international cooperation. It is not an exclusive group that excludes other participants but an open and inclusive cooperation platform. It is not just China’s solo effort, but a symphony performed by all participating countries.”

BRI is inbuilt in the Chinese concept of “opening up.” It is also important to remember that BRI was launched by Xi nine years ago – in Central Asia (Astana) and then Southeast Asia (Jakarta). Beijing has earned from its mistakes, and keeps fine-tuning BRI in consultation with partners – from Pakistan, Sri Lanka and Malaysia to several African nations.

It is no wonder, that by August this year, China’s trade with countries participating in BRI had reached a whopping $12 trillion, and non-financial direct investment in those countries surpassed $140 billion.

Wang correctly points out that following BRI infrastructure investments, “East Africa and Cambodia have highways, Kazakhstan has [dry] ports for exports, the Maldives has its first cross-sea bridge and Laos has become a connected country from a landlocked one.”

Even under serious challenges, from zero-Covid to assorted sanctions and the breakdown of supply chains, the number of China-EU express cargo trains keeps going up; the China-Laos Railway and the Peljesac Bridge in Croatia are open for business; and work on the Jakarta-Bandung High-Speed Railway and the China-Thailand Railway is in progress.

All over the extremely incandescent global chessboard, international relations are being completely reframed.

In contrast, the Hegemon imposes an avalanche of sanctions – not by accident the top three recipients are Eurasian powers Russia, Iran and China; lethal proxy wars (Ukraine); and every possible strand of hybrid war to prevent the end of its supremacy, which lasted barely seven and a half decades, a blip in historical terms.

The current dysfunction – physical, political, financial, cognitive – is reaching a climax. As Europe plunges into the abyss of largely self-inflicted devastation and darkness  – a neo-medievalism in woke register – an internally ravaged Empire resorts to plundering even its wealthy “allies”.

It’s as if we are all witnessing a Mackinder-on-crack scenario.

Russia spans 11 time zones and sits atop as much as one third of the world’s natural resources. A natural symbiosis between Europe and Russia is like a fact of life. But the EU oligarchy blew it.

It’s no wonder the Chinese leadership views the process with horror, because one of BRI’s essential planks is to facilitate seamless trade between China and Europe. As Russia’s connectivity corridor has been blocked by sanctions, China will be privileging corridors via West Asia.

Meanwhile, Russia is completing its pivot to the east. Russia’s enormous resources, combined with the manufacturing capability of China and East Asia as a whole, project a trade/connectivity sphere that goes even beyond BRI. That’s at the heart of the Russian concept of Greater Eurasia Partnership.

In another one of History’s unpredictable twists, Mackinder a century ago may have been essentially right about those controlling the Heartland/world island controlling the world. It doesn’t look like the controller will be the Hegemon, and much less its European vassals/slaves.

When the Chinese say they are against blocs, Eurasia and The West are the facto two blocs. Though not yet formally at war with each other, in reality they already are knee deep into Hybrid War territory.

Russia and Iran are on the frontline – militarily and in terms of absorbing non-stop pressure. Other important Global South players, quietly, try to either keep a low profile or, even more quietly, assist China and the others to make the multipolar world prevail economically.

As China proposes peaceful modernization, the hidden message of the work report is even starker. The Global South is facing a serious choice: choose either sovereignty – embodied in a multipolar world, peacefully modernizing – or outright vassalage.

Pepe Escobar is a columnist at The Cradle, editor-at-large at Asia Times and an independent geopolitical analyst focused on Eurasia. Since the mid-1980s he has lived and worked as a foreign correspondent in London, Paris, Milan, Los Angeles, Singapore and Bangkok. He is the author of countless books; his latest one is Raging Twenties.