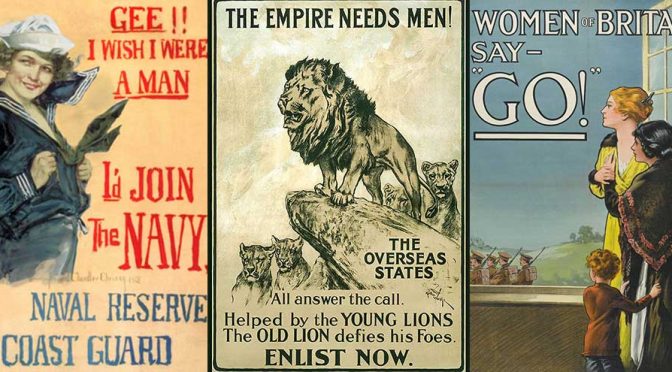 Propaganda makes you stupid. We know that the Ukrainian integral nationalists have committed abominable massacres, especially during the Second World War.

But we don’t know what they have been doing on our doorstep for the last thirty years, including the civil war they have been waging for the last eight years. Our own stupidity allows us to endure the war cries of our political leaders on the side of these criminals.

When war comes, governments always believe that they must boost the morale of their people by showering them with propaganda. The stakes are so high, life and death, that debates get tougher and extremist positions become popular. This is exactly what we are witnessing, or rather how we are being transformed. In this game, the ideas defended by some and others have nothing to do with their ideological presuppositions, but with their proximity to power.

In the etymological sense, propaganda is just the art of convincing, of propagating ideas. But in modern times, it is an art that aims at reconstructing reality in order to denigrate the adversary and magnify one’s own troops.

Contrary to a widespread idea in the West, it was not the Nazis or the Soviets who invented it, but the British and the Americans during the First World War.

Today, NATO coordinates efforts in this area from its Strategic Communication Centre in Riga, Latvia. It identifies the points on which it wants to act and organizes international programs to carry them out.

For example, NATO has identified Israel as a weak point: while former Prime Minister Benjamin Netanyahu was a personal friend of Ukrainian President Volodymyr Zelensky, his successor, Naftali Bennett, recognized the validity of Russian policy. He even advised the return of Crimea and Donbass and, above all, the denazification of Ukraine. The current Prime Minister, Yair Lapid, is more hesitant. He does not want to support the fundamentalist nationalists who massacred a million Jews shortly before and during the Second World War. But he also wants to stay on good terms with the West.

To bring Israel back into line, NATO is trying to persuade Tel Aviv that in case of a Russian victory, Israel would lose its position in the Middle East. To this end, it is spreading the lie that Iran is Russia’s military ally as widely as possible. The international press is constantly claiming that Russian drones are Iranian on the battlefield, and soon the medium-range missiles will be too. Yet Moscow knows how to manufacture these weapons and has never asked Tehran for them. Russia and Iran have repeatedly denied these allegations. But Western politicians, relying on the press and not on mere reflection, have already imposed sanctions on Iranian arms dealers. Soon Yair Lapid, son of the president of the Yad Vashem memorial, will be surrounded and forced to side with the criminals.

The British, on the other hand, traditionally excel in activating networked media and enlisting artists. MI6 relies on a group of 150 news agencies working within the PR Network. They convince all these companies to take up their imputations and slogans.

They are the ones who successively convinced you that President Vladimir Putin was dying, then that he had gone mad, or that he was facing strong opposition at home and that he would be overthrown by a coup. Their work continues today with cross interviews with soldiers in Ukraine. You hear Ukrainian soldiers say they are nationalists and Russian soldiers say they are afraid but must defend Russia. You hear that Ukrainians are not Nazis and that Russians, living under a dictatorship, are forced to fight. In reality, most Ukrainian soldiers are not “nationalists” in the sense of defenders of their homeland, but “integral nationalists” in the sense of two poets, Charles Maurras and Dmytro Dontsov. This is not the same thing at all.

It was only in 1925 that Pope Pius XI condemned “integral nationalism”. At that time Dontsov had already written his Націоналізм (Nationalism) (1921). Maurras and Dontsov defined the nation as a tradition and thought their nationalism against others (Maurras against Germans and Dontsov against Russians). Both abhorred the French Revolution, the principles of Liberty, Equality and Fraternity and denounced Jews and Freemasons relentlessly. They consider religion as useful for the organization of society, but seem agnostic. These positions lead Maurras to become a Petainist and Dontsov a Hitlerian. The latter will sink into a varègue (Swedish Viking) mystical delirium. The next pope, Pius XII, repealed the condemnation of his predecessor, just before the war broke out. At the liberation, Maurras was condemned for intelligence with the enemy (he was a Germanophobe), but Dontsov was recuperated by the Anglo-Saxon secret services and exiled to Canada, then to the USA.

As for the Russian soldiers we see interviewed on our TV news, they do not tell us that they are forced to fight, but, unlike the integral nationalists, they are not fanatics. For them, war, even when defending their own, is always a horror. It is because we are repeatedly told that Russia is a dictatorship that we understand something else. We do not accept that Russia is a democracy because, for us, a democracy cannot be an authoritarian regime. Yet, for example, the Second French Republic (1848-1852) was both a democracy and an authoritarian regime.

We are easy to convince because we know nothing about Ukrainian history and culture. The most we know is that Novorossia was ruled by a French aristocrat, Armand-Emmanuel du Plessis de Richelieu, a personal friend of Tsar Alexander I. He continued the work of the Prince of Ukraine. He continued the work of Prince Grigori Potemkin who wanted to build this region on the model of Athens and Rome, which explains why today Novorossia is still of Russian culture (and not Ukrainian) without ever having known serfdom.

We in Ukraine are unaware of the atrocities of the interwar period and the Second World War, and have a vague idea of the violence of the USSR. We ignore that the theoretician Dontsov and his disciple Stepan Bandera did not hesitate to massacre all those who did not correspond to their “integral nationalism”, first the Jews in this Khazar country, then the Russians and the Communists, the anarchists of Nestor Makhno, and many others. The “integral nationalists”, who had become admirers of the Führer and deeply racist, returned to the forefront with the dissolution of the USSR. On May 6, 1995, President Leonid Kuchma went to Munich (to the CIA offices) to meet with the leader of the integral nationalists, Steva Stesko, the widow of the Nazi prime minister. She had just been elected to the Verkhovna Rada (Parliament), but had not been able to take her seat because she had been stripped of her Ukrainian citizenship. A month later, Ukraine adopted its current constitution, which states in its Article 16 that “preserving the genetic heritage of the Ukrainian people is the responsibility of the state” (sic). Subsequently, the same Steva Stetsko twice opened the session of the Rada, concluding her speeches with the war cry of the integral nationalists: “Glory to Ukraine!

Modern Ukraine has patiently built its Nazi regime. After proclaiming the “genetic heritage of the Ukrainian people”, it enacted various laws. The first one grants the benefit of human rights by the state only to Ukrainians, not to foreigners. The second defines who the majority of Ukrainians are, and the third (enacted by President Zelensky) who the minorities are. The trick is that no law speaks about Russian speakers. Therefore, by default, the courts do not recognize them the benefit of human rights.

Since 2014, a civil war has pitted the integral nationalists against the Russian-speaking populations, mainly those of Crimea and Donbass. 20,000 deaths later, the Russian Federation, applying its “responsibility to protect,” launched a special military operation to implement Security Council Resolution 2202 (Minsk Agreements) and end the martyrdom of Russian speakers.

President Zelensky and his friend, Benjamin Netanyahu. The latter is now making support for Ukraine his main election campaign theme. Netanyahu is the son of the private secretary of Zeev Jabotinsky, a Ukrainian figure who allied with the mainstream nationalists against the Bolsheviks. He tried to put the Ukrainian Jewish community at the service of these anti-Semites, but was unanimously denounced within the World Zionist Organization, of which he became a director.

NATO propaganda tells us about the real sufferings of the Ukrainians, but it does not mention the eight years of torture, murder and massacres that preceded it. It talks about “our common values with Ukrainian democracy”, but what values do we share with the integral nationalists and where is the democracy in Ukraine?

We do not have to choose between one or the other, but only to defend peace and therefore the Minsk Agreements and resolution 2202.

War drives us crazy. There is a reversal of values. The most extremist triumph. Some of our ministers speak of “stifling Russia” (sic). We do not see that we are supporting the very ideas we believe we are fighting against.