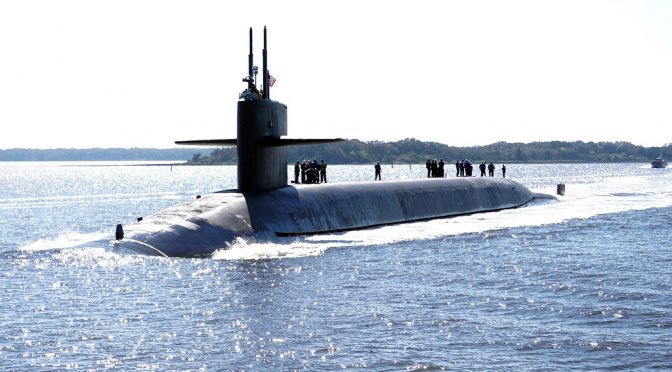 The USS Rhode Island, the world’s largest nuclear submarine, left the Port of Gibraltar on Spain’s south coast last week. It was last seen entering the Mediterranean and headed south towards the Black Sea as a warning to the Kremlin.

British newspaper Daily Express said the nuclear submarine, which is also called “the rider of the apocalypse”, is under “intense protection” from the Royal Marines as it reportedly heads towards the Black Sea. The USS Rhode Island’s departure comes as fears grow over what Vladimir Putin will do after what the mainstream media is continuing to call a retreat.

🇺🇸⚔️⚡⚓ The US nuclear-powered submarine USS Rhode Island, dubbed the "rider of the apocalypse", has entered the Mediterranean Sea.
The submarine is capable of carrying 24 Trident II intercontinental ballistic missiles capable of engaging targets at ranges of up to

Captain John Craddock, the commander of the US Navy’s Task Force, commented earlier this week:

“Rhode Island’s port visit to Gibraltar reinforces our ironclad commitment to our allies and partners in the region.”

“The US and UK share a strong history of cooperation, through exercises, operations, and cooperation activities such as this, that enhance our combined capabilities and partnership. The complexity, lethality, and tactical expertise of Rhode Island epitomizes the effectiveness and strength of the submarine force,” Craddock added.

Putin’s regime has repeatedly claimed Ukraine was planning to set off a dirty bomb – an explosive laced with radioactive material – which intelligence officials believe may be a precursor to a false flag operation.

The USS Rhode Island is an Ohio-class sub, and can, therefore, patrol continuously as a highly-effective tool for the NATO nuclear deterrence force and could be headed to a strategic position near the Black Sea.

It could be an obvious outward visible show of the advancement of this war, and the insistence by the United States and the United Kingdom to ignite into something bigger than it already is.

Mac Slavo is the editor of SHTFplan.com, a resource hub for alternative news, contrarian commentary and strategies that you can take to protect yourself from the coming global paradigm shift.

According to IRNA, Patrushev has arrived on an official visit at the invitation of Secretary of Iran’s Supreme National Security Council Ali Shamkhani.

Apart from talks with his Iranian counterpart, the Russian security chief plans to meet with Iranian “high-ranking political and economic officials to discuss issues of the development of bilateral relations and cooperation in the international arena,” the agency said, adding that Patrushev is accompanied by officials from several Russian economic agencies.

No more details are available.