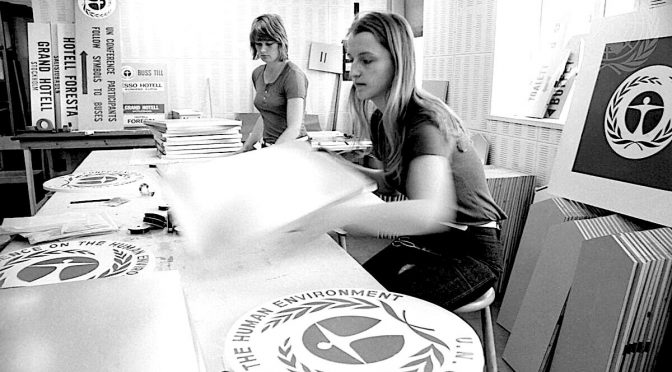 The main fears of the Club of Rome’s 1972 study have been reaffirmed, the authors say. But there is still a scenario allowing for widespread increases in human wellbeing within the planet’s resource boundaries.

Ahead of the first United Nations environmental summit in Stockholm in 1972, a group of scientists prepared The Limits to Growth report for the Club of Rome. It showed planet Earth’s finite natural resources cannot support ever-growing human consumption.

Limits used integrated computer modeling to investigate 12 planetary scenarios of economic growth and their long-term consequences for the environment and natural resources.

It conceded, “Any human activity that does not require a large flow of irreplaceable resources or produce severe environmental degradation might continue to grow indefinitely.”

But Limits was never meant to be a definitive forecast, and should not be judged as such. Instead, it sought to highlight major resource threats due to growing human consumption.

Gaya Herrington,  director of sustainability services at the auditing firm KPMG, has shown that three of Limits’ four major scenarios anticipated what is now trending.  Two lead to major collapses by mid-century. She concluded, “humanity is on a path to having limits to growth imposed on itself rather than consciously choosing its own.”

Limits stressed the urgent need for radical transformation to achieve “sustainable development.” The “international community” embraced this, in principle, at the 1992 Earth Summit in Rio de Janeiro, two decades after Stockholm.

With accelerating resource depletion – as current demographic, industrial, pollution and food trends continue – the planet’s growth limits will be reached within the next half-century. The Earth’s “carrying capacity” is unavoidably shrinking.

Limits declared that only a “transition from growth to…a desirable, sustainable state of global equilibrium” can save the environment and humanity.

No other environmental work then, or since, has so directly challenged mainstream growth beliefs. Unsurprisingly, it attracted strong opposition.

The 1972 study was long dismissed by many as neo-Malthusian prophecy of doom, underestimating the potential for human adaptation through technological progress.

Many other criticisms have been made. Limits was faulted for focusing too much on resource limits, but not enough on environmental damage. Economists have criticized it for not explicitly incorporating either prices or socioeconomic dynamics.

In Beyond the Limits (1993), the two Meadows and Randers argued that resource use had exceeded the world environment’s carrying capacity.

Using climate change data, they highlighted the likelihood of collapse, going well beyond the earlier focus on the rapid carbon dioxide build-up in the atmosphere.

In another sequel, Limits to Growth: The 30-Year Update (2004), they elaborated their original argument with new data, calling for stronger actions to avoid unsustainable excess.

Limits’ early 1970s’ computer modeling has been overtaken by enhanced simulation capabilities. Many earlier recommendations need revision, but the main fears have been reaffirmed.

As Limits argued, environmental crisis and collapse are due to socioeconomic, technological and environmental transformations for wealth accumulation, now threatening Earth’s resources and ecology.

Of course, innovative new technologies are needed to address old and new problems. But these have to be deployed to enhance sustainability, rather than profit.

The Limits’ critique is ultimately of “growth” in contemporary society. It goes much further than recent debates over measuring growth, recognizing greater output typically involves more resource use.

While not necessarily increasing exponentially, growth cannot be unlimited, due to its inherent resource and ecological requirements, even with materials-saving innovations.

This Earth for All

This scenario has inspired Earth for All – the Club of Rome’s Transformational Economics Commission’s 2022 report – which more than updates Limits after half a century.

Its subtitle – “A Survival Guide for Humanity” – emphasizes the threat’s urgency, scale and scope.

It argues that ensuring the wellbeing of all is still possible, but requires urgent fundamental changes. Major efforts are needed to eradicate poverty, reduce inequality, empower women and transform food and energy systems.

[Related: It Doesn’t Trickle Down]

Many food systems are broken. They currently involve unhealthy and unsustainable production and consumption, generating much waste. All this must be reformed accordingly.

Market regulation for the public good is crucial. Better regulation – of markets for goods (especially food) and services, even technology, finance, labour and land – is necessary to better conserve the environment.

The report includes a modeling exercise for two scenarios. “Too Little Too Late” is the current trajectory, offering too few needed changes.

With growing inequalities, social trust erodes, as people and countries compete more intensely for resources. Without sufficient “collective action,” planetary boundaries will be crossed. For the most vulnerable, prospects are grim.

In the second “Giant Leap” scenario, the five needed shifts are achieved, improving wellbeing all around. Everybody can live with dignity, health and security. Ecological deterioration is sufficiently reversed, as institutions serve the common good and ensure justice for all.

But as the world moves ever closer to many limits, the scenario looming is terrifying: ecosystem destruction, gross inequalities and vulnerabilities, and social and political tensions.

While regimes tend to bend to public pressure, if only to survive, existing discourses and mobilization are not conducive to generating the popular political demands needed for the changes.

Adnan A Hezri is an environmental policy analyst and fellow of the Academy of Sciences, Malaysia. He is author of The Sustainability Shift: Reshaping Malaysia’s Future. This article is from Inter Press Service.