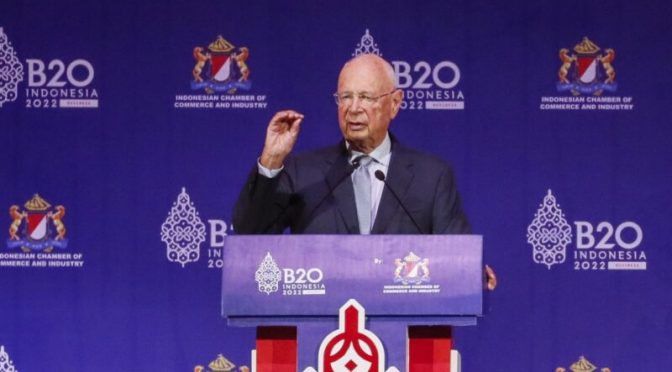 Listening to Klaus Schwab, eternal CEO of the World Economic Forum (WEF), speak at the G20 / B20 conference in Bali, Indonesia (15-16 November 2022), you can’t avoid the impression listening to an Avatar – a self-designed deity.

In many ways, Klaus Schwab comes across as an extra-terrestrial being, no longer human, perhaps close to the transhuman he professes will be humanity’s destiny, when his wet dream, The 4th Industrial Revolution, becomes true.

He is very proud for having written the Great Reset, where at the end probably in or around 2030, to coincide with the UN Agenda 2030 – which was approved by the WEF and vice-versa, you own nothing but are happy.

By the same token and if Klaus Schwab has his ways, by 2030, when you are happy with naught, your brain may have already merged with artificial intelligence (AI) to convert you into a super-robot, who doesn’t need anything to be happy, not even food.

The Graphene Oxide with which you may have been vaxxed – and if you are lucky, have survived — will receive the 5G ultra-shortwaves that transform you from a human into a transhuman, a term Mr. Schwab already used in am interview in 2016 with the Swiss French TV. The 2-min youtube video has since been eliminated – of course, “fact-checked” away.

When robotizing humans into transhumans – they may also cease to be “useless eaters”, not even insect-eaters (take note Bill Gates!), thus, fulfilling super Professor Yuval Noah Harari’s dream – doing away with the useless eaters. The Israeli Hariri is a close adviser of Klaus Schwab’s.

In his speech, Schwab is not only praising Indonesia for being an exemplary host, but also for having the potential to leading the world into a new era of “mergers”. For example, the G20 – standing for the “Group of 20” – mind you, an association that has no legal standing, not even that of an NGO, similar to the G7 – has merged with B20, with the “B” standing for Business. Does it mean the “Business Group of 20”?

It’s not clear. But Mr. WEF refers to “G” and “B” as if they could not live without each other in a future world. As said before, a world ever more dystopian; a world nobody wants, literally no one on this planet, safe for a few elite-Avatar brothers of Klaus Schwab’s, wants to merge his or her freethinking, sovereign humanity with a robot.

Yet, at the end of his speech, Mr. Schwab “earned” a big applause. Was it sheer hypocrisy? Or perhaps minds are already so dystopianized that it came as a natural gesture, applauding a self-styled dystopian god, who predicts a new dystopian world?

See and listen to Klaus Schwab’s speech for yourself.

At the end of the video, you may find some 200-plus comments, none of them positive. But one of them hilarious enough to quote here,

Peter Koenig is a geopolitical analyst and a former Senior Economist at the World Bank and the World Health Organization (WHO), where he worked for over 30 years around the world. He lectures at universities in the US, Europe and South America. He writes regularly for online journals and is the author of Implosion – An Economic Thriller about War, Environmental Destruction and Corporate Greed; and  co-author of Cynthia McKinney’s book “When China Sneezes: From the Coronavirus Lockdown to the Global Politico-Economic Crisis” (Clarity Press – November 1, 2020).