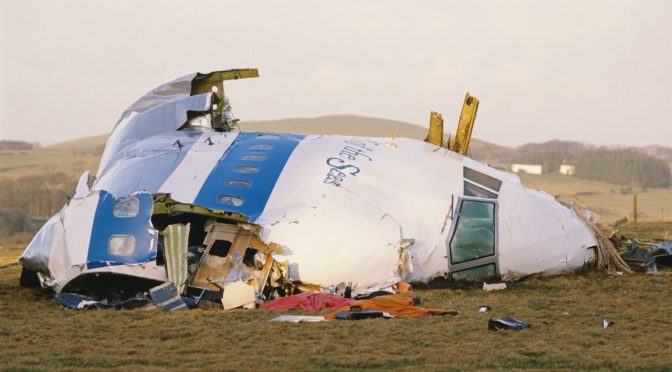 The interesting detail of the Lockerbie bombing was the extent of how far the plotters went to divert blame to Libya.

There can be no better example of the old saying “a lie can travel half way around the world before the truth is even putting its shoes on” than Lockerbie. This tragic story of a U.S. passenger flight brought down by a bomb over the small Scottish village just a few days before Christmas in 1988 is heartbreaking on a number of levels. But the main one is that even to this day, the Americans continue to keep the huge lie alive: Libya’s involvement.

Just in the last week of November, still we see news reports from U.S. media newswires writing about Lockerbie and continuing to promote Libya’s involvement when 34 years after the terrible event the evidence is so overwhelming to show that Libya had nothing to do with the bombing.

In recent days, it has been reported that a third man in the Lockerbie bombing – a Libyan intelligence officer with bomb-making skills – has disappeared, sparking worries in Libya that the Americans might restart a case against the country even though a previous agreement with the U.S. is in place.

The officer in question is Abu Agila Mohammad Masud Kheir al-Marimi who in 2020 was charged by U.S. Attorney General William Barr a week before he left office during Trump’s presidency. Barr is the useful idiot who earlier during George W. H. Bush’s term in office charged in 1991, two Libyan nationals for the bombing: Abdel Baset Ali al-Megrahi and Lamen Khalifa Fhimah.

He is the idiot who Bush instructed to continue with the case against the Libyans when the U.S. president actually knew by that time, through his own intelligence officers’ reports, that Iran was culpable with the aid of Syria. Bush didn’t want any heat from Syria’s Hafez al-Assad who he needed on his side for his Kuwait invasion in 1990, so it suited Bush senior to continue with the Libya charade which framed the two Libyan officers.

Megrahi was found guilty in Scotland of the Lockerbie bombing in 2001 and freed in 2009 on compassionate release grounds before dying of cancer in 2012. Subsequent to his death though a tome of evidence has been produced to show that the Scottish court in the Netherlands had acted improperly in sentencing him and that the link with Libya was manufactured by those who masterminded the bombing.

Moreover, both their cases have since proved by a number of leading journalists to be a grotesque travesty of justice and in all respects the two were ‘fall guys’ to a bigger plot yet to be exposed by mainstream media.

The FBI, the Scottish police and the British government were all intent on putting the case together towards the two Libyans as America badly wanted to frame Gaddafi and so the fundamental flaw in the case – clothes in the suitcase supposedly coming from Malta – became the red herring which fingered the two Libyan agents.

Even today, on the FBI’s website, the same astonishing lie rests at the heart of one of America’s biggest ever cover ups. The FBI, without a shred of evidence still claim that the suitcase the bomb came with, was placed on board the flight from Malta which has a large number of Libyan intelligence officers. Yet any number of investigations subsequently have proved that according to Frankfurt Airport records, this is untrue.

In reality, the bomb was placed on the flight in Frankfurt by Syrian-linked Palestinian terrorists based there who were paid via third parties from Tehran, which numerous independent investigations have proved beyond doubt. This group, which German intelligence had been following for years, may never have even know who was paying them ultimately but their attention to detail and expertise over the bomb itself is as impressive as the items placed in suitcases designed to lead Scottish investigators and FBI agents towards the Libya link.

The initiative by the Americans, just two years ago, to pursue this third man is part of a greater cover up which started in the late 80s to frame the Libyans in preference to accusing Iran and Syria which U.S. presidents still to this day fear. But it’s also about money. How much money would the American families get if they brought cases against the American government today?

Almost 34 years after Lockerbie, there is now ample evidence both from journalists, investigators and whistleblowers for those families to see the truth about Lockerbie which is so shocking that it would make Hollywood film makers turn it down as a movie script as it is so unbelievable.

Incredibly, Pan Am 103 was a ‘controlled flight’ by CIA agents which was carrying drugs placed on board by terrorist groups which Reagan needed to keep happy, while negotiating the freedom of U.S. hostages in Beirut.

Iran discovered this arrangement – as those groups in Lebanon were ideologically aligned to Tehran and later became Hezbollah – and decided to seek revenge for the U.S. downing of Iranian airliner 655 in the Persian Gulf in July of 1988 by placing their own case on the flight, which they knew would not be examined by CIA officers, as it would be assumed to be drugs.

The plotters even went as far as sacrificing one of the young men from the Lebanese group who was on board. But the interesting detail of the Lockerbie bombing was the extent of how far the plotters went to divert blame to Libya.

Libya was always an easy target to frame as western media had been priming its readers with fake news stories about Gaddafi’s terror attacks in the west, in most cases entirely falsifying evidence and framing him for many which were in fact carried out by other groups, the best example being the Berlin disco bombing of April 1986, which was in fact carried out by Iranian groups based in Lebanon.

It suited Ronald Reagan very well to shy away from tackling Iran and Syria head on and cultivate the myth of Gaddafi as the ‘mad dog’ of the region and subsequent U.S. presidents like Bush senior. But in reality the American public were being cheated on a grand scale, even to this day.

But it’s not only the American public who are being fooled.

The Lockerbie case cost the Libyans great financial losses during the rule of Muammar Gadhafi, as Libya paid compensation to the families of the victims estimated at $2.7 billion. Libyans fear the case could be reopened, leading to more financial losses. If the American public knew that its own government, directed by Ronald Reagan, had covered up its own dirty work so as to stop the truth from coming out – that it was the CIA allowing terrorists to send drugs to America via U.S. airlines and protected by CIA and FBI agents – then the compensation claims would be unprecedented.

And so, to this day, the blame is put on the Libyans even though the mad dog Gaddafi is long gone. It’s the easiest and logical way to keep the lie alive as just as Gaddafi was reluctant to destroy the myth of his involvement (as it boosted his credibility in the Arab world), even today there is no real accountability.

Conveniently, Libya remains opaque, unaccountable and bereft of any free press that can dig for truth there and there is also a big question today as to whether some political factions there are happy to play the game the Americans want.

There are even rumours that Marimi, who was in a Libyan jail, was handed over to the Americans in a secret deal. If this is the case, then the feral need to keep the Libya connection alive is as important today as it was in the late 80s.

Just as then, U.S. leaders were too afraid to point the finger at Tehran, they are the same today. Iran didn’t just get revenge for the downing of its Flight 655. It got payback on a scale it couldn’t imagine as the Libyan game that the U.S. is still playing today shows that Iran has always been the winner in this dirty war.

Martin Jay is an award-winning British journalist based in Morocco where he is a correspondent for The Daily Mail (UK) who previously reported on the Arab Spring there for CNN, as well as Euronews. From 2012 to 2019 he was based in Beirut where he worked for a number of international media titles including BBC, Al Jazeera, RT, DW, as well as reporting on a freelance basis for the UK’s Daily Mail, The Sunday Times plus TRT World. His career has led him to work in almost 50 countries in Africa, The Middle East and Europe for a host of major media titles. He has lived and worked in Morocco, Belgium, Kenya and Lebanon.