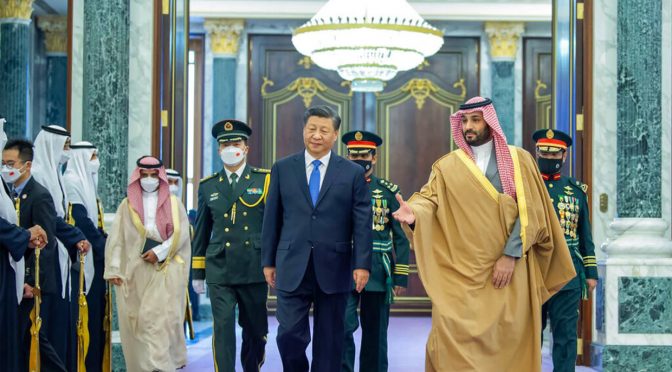 Beijing manages to maintain strategic partnerships with other countries despite their ongoing sectarian disputes.

Chinese President Xi Jinping began his ‘epoch-making’ visit to Saudi Arabia on Thursday, as the Asian economic powerhouse seeks new inroads in the Middle East region amid increasing turmoil between Riyadh and its traditional allies in Washington.

Despite the fact that the Middle Eastern country has long been a theocratic monarchy, new criticism has emerged in the West over Riyadh’s spotty human rights record. China, however, is moving in without attendant criticisms that are – while mostly valid – more often than not fraught with boldfaced hypocrisy, given the West’s proclivity for unilateral wars of aggression and trampling on its domestic population’s civil liberties.

In fact, China’s policy of strict non-interference in the affairs of other countries has materialized in the Middle East with remarkable success. While Washington has stoked sectarian disagreements between Sunni and Shia Muslims by drawing the Gulf States and Iran into proxy conflicts, Beijing has pursued fruitful economic cooperation with both sides without protests from either side. China actually penned a historic, 25-year agreement with Saudi Arabia’s regional adversary, Iran, earlier this year that will include partnerships in many fields, including trade, economics, and transportation.

China also early this year presented a five-point security initiative on achieving security and stability in the Middle East. The points of this initiative are advocating mutual respect; upholding equity and justice; achieving nuclear non-proliferation; jointly fostering collective security; and accelerating development cooperation, as stated by the Chinese Foreign Ministry. This has been warmly greeted by countries in the region and is a model for how China wants to foster security cooperation without launching unilateral wars under false pretenses, as the United States did in Iraq.

But Xi’s visit was mostly focused on economic cooperation. Saudi Arabia has drawn the ire of Washington in recent months after voting in favor of cutting oil production in October in the OPEC+ format despite calls from US President Joe Biden to boost production in order to bring fuel prices down, no doubt to help his party’s odds in last month’s midterm elections. Since then, Riyadh has shown its lack of desire to be pinned by the West and is diversifying its relations by turning eastward.

In steps China. As a signatory of the Beijing-led Belt and Road Initiative (BRI) and a key hub in linking Asia, Europe, and Africa, Saudi Arabia is uniquely positioned to benefit from development cooperation with China, which has been eager to invest in tangible assets and boost win-win cooperation with countries in the Global South seeking economic development.

At the same time, the conditions are already there for the two sides to boost their cooperation, given that Riyadh is China’s largest trading partner among Arab countries and China has been Saudi Arabia’s biggest trade locale since 2013. In particular, China is a massive importer of raw materials from all over the world, which it uses to power its vast manufacturing base – and Saudi oil is no exception. With that being said, the two are also closely aligned in their Green development initiatives, which, for the Saudi side, is detailed in the Kingdom’s ‘Vision 2030’.

According to media reports, agreements worth a hearty $29 billion are expected to be signed by the two sides during Xi’s visit. These include more than 20 initiatives and a strategic partnership agreement that will harmonize the aforementioned Vision 2030 with the BRI. The two countries will, after the outcome of this visit, thus more firmly align their long-term strategic outlooks to complement one another and will lead to more win-win cooperation for both sides.

While Washington is seeing its relations with the Kingdom fall out in recent days despite Saudi Arabia being an ally of the United States for several decades, China is seeing a massive boost to its diplomatic capital in the Middle East. That is precisely because Beijing does not make political demands of its allies that directly contradict their basic self-interest, as the US has attempted to do by pulling Riyadh into its proxy conflict against Russia in Ukraine via unilateral sanctions and other means.

That is to say that China’s strict non-interference policy is its greatest leverage in butting the US out of the Middle East. Countries in the region know all too well the destruction that follows Washington’s agenda; They have seen their sister countries maimed and destroyed by American foreign policy and many have had to house the refugees produced by these conflicts. But Beijing offers a different brand of partnership, namely one that is not dependent on one-sided political dealings or sectarian hatred – but on simple self-interest.

The greatest mark of China’s success in the Middle East compared to Washington is the fact that it can maintain strategic partnerships with countries like Saudi Arabia and Iran that have been rife with sectarian disputes for decades. That is something that the West has not only never been able to achieve but has only ever capitalized on to suit its own political objectives in the region through divide-and-conquer tactics.

Bradley Blankenship is an American journalist, columnist and political commentator. He has a syndicated column at CGTN and is a freelance reporter for international news agencies including Xinhua News Agency. Follow him on Twitter @BradBlank_