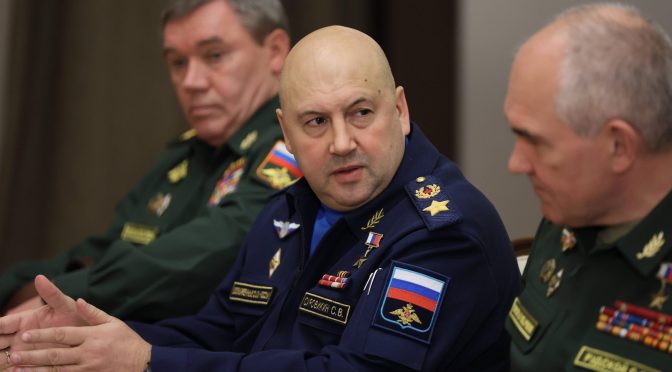 Although total war has its modern roots in Sherman’s march to the sea, it is an American play-book that has now run its course. It ultimately failed the Wehrmacht, it ultimately failed the U.S. terror machine in Vietnam and, thanks to the fortitude of the Russian Armed Forces, it is spectacularly failing again as General Surovikin bulldozes his way to Odessa.

Just as General Grant’s March Through Georgia broke the back of the Confederate Army, so also is General Surovikin’s march to the Black Sea slicing through NATO’s lies like a hot knife shredding butter, portending future upsets that will hasten the descent of Borrell’s vaunted EU Garden of Eden into the abyss, as its last semblances of credibility, law and order dissipate, just as they long ago died in Kiev, the capital of Zelensky’s rump Reich and just as NATO has long been fixated on destroying them in Syria and Lebanon.

Though chutzpah is a Hebrew word, the NATO’s BBC outlet have that same arrogance, that same chutzpah in spades when they distort the truth to mask that they are the biggest rogues of the lot. Take their coverage of Saudi Arabia’s captagon crisis. There is an insane amount of money to be made smuggling captagon into Saudi Arabia, whose rich kids use it to fuel their interminable orgies. Much of this captagon is produced not in Syria but in Lebanon’s Bekaa Valley, which has become much more anarchistic with the relative easing of Hezbollah control since the NATO alliance instigated Lebanon’s 2019 financial collapse. Beirut’s large Saudi contingent handle the captagon logistics.

As the Saudi prince who was recently caught in Beirut airport had an impressive 2 tons of Captagon tablets in his checked in baggage, it didn’t take Sherlock Holmes to capture that clown, though it takes the clowns who work at NATO’s BBC outlet to pretend that Syria’s 4th Armored Brigade were the brains behind that nincompoop.

The BBC has also informed the long suffering British people who are forced to fund it that the large amounts of captagon recently captured on the Iraqi Jordanian border also originated in Syria. Yet, the Iraqi Jordanian border, being mostly desert, is very porous, and armed clashes between an array of gangsters and the Jordanian security forces occur there regularly. The Syrian Army has nothing to do with any of it.

Though Alakhbar have made countless documentaries about these clashes, the BBC never let facts like those get in the way of NATO’s narrative. Far better to blame the Syrian Army and General Surovikin, the liberator of Aleppo, to whom the Syrian people are eternally grateful. Certainly, those Syrian Christians, who fist pumped the air in front of me as the Russian and Syrian air forces obliterated NATO’s rabble speak reverentially of him just as Russian traitors like NATO poster boy Alexei Navalny libel him by saying Surovikin fought in Syria only for the money, as if there were not easier ways to earn money than tinkering about in Syria whose people, along with Serbians, are the gold standard in resistance to NATO’s total war thuggery.

But just as with Russia’s Great Patriotic War, so also now is Odessa again a sideshow to the greater struggle Europe now faces. When Zhukov’s Red Army swept across the Oder into Germany, they were amazed at how well tended the German houses and gardens were and they were angered as to why these rich Germans invaded their homeland to rob them of the very little they had.

To get a flavor of their anger, read this harrowing account of the unimaginable horrors British politician James Molyneaux witnessed at “an unforgettable Latin Mass” on the very day his troops liberated Belsen concentration camp. It is that same righteous anger that cries even beyond the heavens for vengeance that drives Surovikin’s soldiers on to Odessa and, God willing, Kiev and Lviv.

At least the Waffen SS Molyneaux faced had a good style of dress, as Hugo Boss personally designed their outfits to accord with the Nazis’ master race ideology. Not so the tacky coke-head Zelensky, who won’t even buy himself a shirt and tie but prefers instead to swan about in his tacky parka jacket and green Rambo jungle t-shirts like he is playing Fidel Castro in the Sierra Maestra.

Though the Americans swallow that narrative whole, few others do. Certainly, the men and women who served with Surovikin in Syria and who are now cutting a swathe through Zelensky’s rump Reich do not.

And nor do the billions of Africans, Asians and Latin Americans who are silently cheering on Surovikin from the sidelines and who stand ready to breathe life back into Borrell’s jaded garden once Borrell, von der Leyen and the mini-army of coke-heads, sex perverts and sundry other CIA puppets who nominally rule the nominally sovereign states of the European Union get their marching orders, as they will when economic meltdown begins in earnest.

Any empire that puts idiots like Borrell and von der Leyen at the helm and that allows the British Special Boat Service terror group blow up its vital infrastructure without consequence or even protest deserves to die. Any jaded empire that thinks it can steal Russia’s resources and mutilate its soldiers without suffering blowback and which thinks it can bully China, Africa and the world without consequence best watch out. Any modern empire that has an idiot like Borrell at the helm, who promises to park EU tanks on Russia’s lawns and who hectors Russia about Africa has its days numbered and, though General Armageddon is but one finger of the fist forming to crush them, his is not the only or most lethal one.

Europe can no longer control the world. It can’t even control itself. The French Parliament can crucify their national anthem all they like, their idiotic President can do a Zelensky at the World Cup in fake celebrations as fake as this fake Pepsi protest ad all he likes but it is over. Europe is dead, having exhausted herself to serve the needs of the Pentagon, Pepsi and Capitol Hill.

Vae victis, woe to the vanquished. Europe has lost not only the war but it has also lost the peace. Honestly, when the Holy Father emerged on the balcony overlooking St Peter’s Square on Christmas Day to give his Urbi et Orbi address, I fully expected Clown Prince Zelensky, in his knock off Fidel Castro gear, to push him aside and start rabbiting on about how Rome and the world must send that idiot billions more. Any nation, any religion, any body who allows themselves to be trolled by such a transparent cross-dressing troll deserves to perish without trace.

But, if we look back at those the U.S. has championed in Syria, Lebanon, Afghanistan and even Europe, we see the same caliber of clowns, the same sad U.S. circus. That and Micky Mouse, Donald Duck and enough Agent Orange to kill the world, Borrell’s Elysian Fields included, seems to be all Uncle Sam has to offer. Masha and Mishka, on the other hand, offer something purer. As does Hans Christian Andersen, the great Danish patriot, who gave Rome and the world the story of the emperor having no clothes which ends with the parade carrying on as before, with nothing a whit different, bar the emperor is stark naked.

Once General Armageddon’s forces liberate Odessa and lift the siege of Transnistria, Borrell, von der Leyen and the rest of them will stand naked before truth’s eternal flame, where billions more of Asians, Africans and Latinos will see them for the threadbare, tacky charlatans that they are.

As God is on the side of the big battalions, von der Leyen, Borrell and the calypso singers of the French Parliament have not get a chance. Not only are the numbers stacked overwhelmingly against them but so is the vibrancy. Though I already mentioned Uganda’s wonderful Masaka dancers in an earlier piece, it is worth mentioning that Africa brims from top to tail with such vibrancy and, as this Indian piece praising the Masaka dancers explains, those wonderful children have experienced horrors that would make even General Armageddon, Zhukov or James Molyneaux wince.

Even though von der Leyen, Borrell and the U.S.’ other European flunkeys think they have done a great job in banning Russian media outlets, all they have done is divert people like me from their own toxic wells into more pristine African, Indian and Chinese sources and, for that I am grateful for watching India’s fantastic insights into Europe’s hypocrisy over the World Cup, Qatar, sports washing, Macron, Gary Lineker and Europe’s hypocritical politics of convenience.

I am thankful to India, Malaysia, Nigeria and Thailand not only for their excellent analyses of the World Cup but also for their informative updates on and analyses of General Armageddon‘s march to the sea. And let’s not, of course, forget China in all this, that land of soft and hard power calculations, whose children are now learning the Igbo language of Eastern Nigeria, and who will undoubtedly love Schubert’s Ekele Maria, performed here by St. Joseph’s Catholic Chaplaincy Choir, Imo State University, whose grandparents not only defied the odds by surviving NATO’s 1967-70 Biafran genocide campaign but who would also readily appreciate the wider significance for the Igbo, for Africa, for Rome and for all the world of General Armageddon’s march to the sea.